A Prayer for Inauguration Day 2021 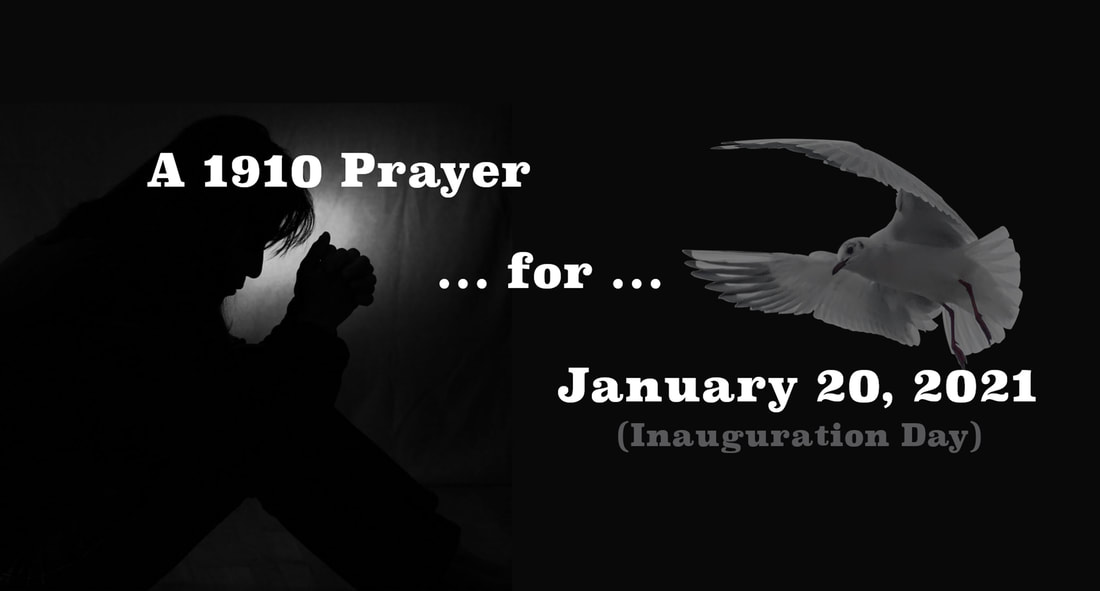 The Word of God says that we should pray for our leaders: "I exhort therefore that first of all, supplications, prayers, intercessions, and giving of thanks, be made for all men. . . . for kings and all that are in authority that we may lead a quiet and peaceable life in all godliness and honesty."

I am praying now because life in my country does not seem quiet, peaceful, honest or godly.

May our leadership find their spirituality once again.
Why a Prayer from 1910?
More than one hundred years ago a man prayed for his country. The American magazine published this prayer as the frontispiece—the back of the first page—of its February 1910 issue. When Ray Stannard Baker, the journalist for the magazine, initially asked the professor to read some of his prayers “for the new age,” this supplication was the first he read. It was entitled: “A Prayer for All Public Officers.”

I think we need it today as much as the country did then.
The American Magazine: A Prayer for all Public Officers
“O God, thou great governor of all the world, we pray Thee for all who hold public office and power … for the life, the welfare, and the virtue of the people, are in their hands to make or to mar.

“We remember with shame that in the past the mighty have preyed on the labors of the poor; that they have laid nations in the dust by their oppression, and they have thwarted the love and the prayers of thy servants.

​"We bless Thee that the spirit of democracy has touched even the kings of the earth. We rejoice that by the free institutions of our country the tyrannous instincts of the strong may be curbed and turned to the patient service of the commonwealth.

“Strengthen the sense of duty in our political life. Grant that the servants of the State may feel ever more deeply that any diversion of their public powers for private gain or ambition is a tampering with a sacred trust and a betrayal of their country. Purge our cities and states and nation of the deep causes of corruption which have so often made sin profitable and uprightness hard.

“Raise up a new generation of public men [and women], who will have the faith and daring of the Kingdom of God in their hearts, and who will enlist for life … for the freedom and rights of the people.

“Give our leaders a new vision of the possible future of our country and set their hearts on fire with large resolves.
​
“Breathe a new spirit into all our nation and let us rise from the dust and mire of the past to gird ourselves for a new day’s work.”
Walter Rauschenbusch, Rochester Theological Seminary, 1910​ [See Footnote #1]
This Author's Opinion
I hope this prayer from 1910 shows that there is no “new normal.” We have just returned to some disgusting ways of our ancestors—debates are the livelihood of a democracy, but unbridgeable divisions are its antithesis. We have overcome many differences—peacefully—and we have fought an ugly civil war over a human-rights division we failed to bridge. We need to “breathe a new spirit into our nation,” and we need to “rise from the dust to gird ourselves for a new day’s work.”

I hope that our spiritual leaders take the lead and call for new days of prayer for our political leadership. For too long, we have been talking economics, business and politics, and downplayed the spiritual. In a land with the freedom of religion where each may worship their own God in their own way, it is now time for each of us to pray! There are too few lands on the face of the planet where religious freedom can be openly displayed without fear. Our country is still the light of the world.
​
Now is time for the spirit to move—once again—across our country by moving deeply within each of us. Our Constitution dictated that we must keep the power of the church and the power of the state separated. Those were wise words, but our founders never intended to separate man from that spiritual power within him--his Creator.

Now is the time to pray that we discover, elect and hold high the humble, spiritual men and women who can lead us forward.