DISCERNING READERS
The Cost of War 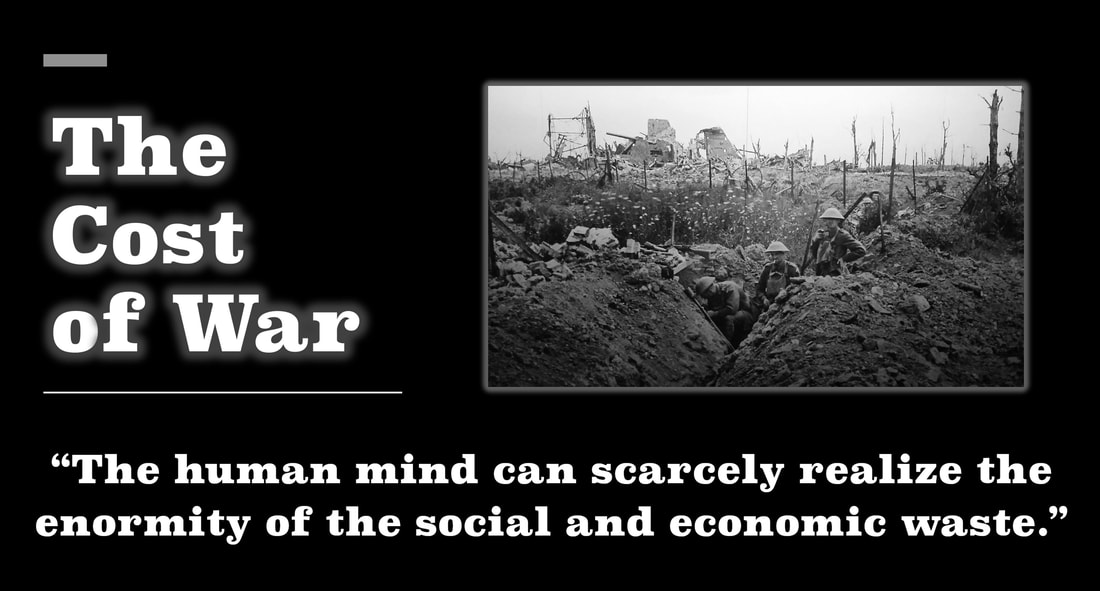 Introduction to Tom Watson Sr.'s "The Cost of War"
​To understand the extent of World War I, it is necessary to convert dead, missing and wounded into today's numbers. The number of solders killed in World War I was 10,000,000; the number of civilians was 13,000,000. An additional 23,000,000 soldiers were wounded or went missing. This was a total of 46,000,000 men, women and children either dead, missing or wounded. As a proportion of today's worldwide population—even though this was a war fought mainly in Europe—would equate to 87,000,000 dead and another 87,000,000 wounded or missing—a total of 174,000,000 people.
​
Only seven countries in the world have a larger population. So pick your country and if it isn't China, India, Indonesia, Brazil, Pakistan, Nigeria or the United States, this war would have touched every person within the population. In most cases it would have destroyed even today's nations in multiples of fives or tens. In the United States, more than 1 of every 2 citizens would be dead, wounded or missing.

It is no wonder that so many individuals tried to prevent another war. When this was read into the Congressional Record, barely two decades had passed since an armistice was signed to end the war that was meant to end "all" wars.

​Subheadings and pictures have been added by this author and are his sole responsibility.
Thomas J. Watson Sr.'s "The Cost of War"
The History of The Great War and Its Human Costs
The Treaty of Versailles, which ended the "war to end all wars" was signed only 19 years ago. In the intervening years the utter futility of war has been vividly apparent from the fact that none of the combatants in the World War won; they all lost. Yet today the nations of the world, large and small, are again engaged in a race to rearm at an expense of many billions of dollars annually in the fear that the world is headed for another outbreak of hostilities.

What humanity faces in this terrific race for rearmament is only to be shown by facts. Let us examine the cost of the World War. Let us consider what might have been done with the money expended for the World War by this country alone, if it had been employed instead for the welfare of our people.

The human mind can scarcely realize the enormity of the social and economic waste represented by the part of this war cost borne by the United States alone.
The $51,000,000,000 which the World War has cost us to date could do all of the following:
In Peace, We Could Have Spent the Money Differently
Wire the 9,400,000 urban and rural homes of the United States which do not have electricity; pay all farm mortgages in the United States; install bathrooms with running water in the 80 percent of our farm homes which do not have them; double the present endowment funds of all institutions of higher learning in the United States; build four consolidated rural high schools, at $250,000 each, in every county of the United States; spend a million dollars in each county for airports and emergency landing fields; build 10 bridges like the Triborough Bridge; build another canal across the Isthmus of Panama; establish a five-billion-dollar program for prevention of floods and soil erosion; set up an endowment fund which, at 3-percent interest, would provide a pension of $100 a month for every blind person and deaf-mute in the United States: finance the entire recovery and relief program of the United States from the time it was begun in 1932 to the end of the fiscal year 1938, which includes aid to agriculture, the Civil Works Administration, the Public Works Administration, aid to home owners, and the resettlement and housing activities of the Government; and endow at 2 percent an organization to promote world peace at more than the combined cost of the League of Nations, the World Court, and the International Labor Organization.
The Burden of the Cost of War on Governments
The combined national debts of the countries of the world was increased from about $43,000,000,000 in 1913 to $400,000,000,000 in 1921. The cost of living has doubled. The inflated price structure and dislocation of trade and industry finally resulted in the world-wide depression which began in 1929. The world is still paying for that war in interest on debt and in caring for the crippled and insane. Over $4,000,000,000 of the expenditures of the United States Government in 1936 can be traced directly to war and more than three and one-fourth billions more was for relief due to the depression which grew out of the war.

Of the eight and one-half billions of dollars of government expense of 1936, about seven and one-half billions, or 88 percent, was due, directly and indirectly, to war.
What Would Another World War Cost?
The Spanish-American War, 33 years after the close of the Civil War and lasting only a few months, left the United States with an annual expenditure for national defense more than three times as high as it was before, and increased the total running expenses of the Government by 46 percent. Nearly 20 years later, the United States entered the World War, which raised expenditures from $734,000,000 to more than three and one-fourth billions, a new level about four and one-half times as high as before. National debt was increased from $12.16 per capita before the war to $222.35 in 1921, and the interest was nearly one and one-fourth times as much as all Government expenses together had been before the war.

The $962,000,000 the United States is now spending for armaments is about double the amount we are spending to run our normal schools, colleges, universities, and professional schools. It would provide $1,375 for the special education and correction of every one of the 700,000 boys and girls of this country who are making a wrong start that leads to crime. We cannot eliminate all our crime bill, estimated to be $15,000,000,000 annually, but we are thinking within the bounds of possibility if we speak of eliminating half of it.

The great lesson which civilization must now learn is that another great war is certain to bankrupt the world, both financially and morally. It must also learn that war can be avoided; and that the free interchange of ideas and ideals, of men and methods, of products and processes can afford every nation an equal opportunity to advance the welfare of its people. As a result of this lesson we should see all countries of the world reduce trade barriers in time, stabilize their currencies and adjust their international debts on a basis that will be fair to debtor and creditor countries alike.

If all countries would adopt spiritually the principle of "World Peace Through World Trade" higher living standards and prosperity for all would be sure to follow.
Thomas J. Watson Sr., "The Cost of War"
Return to the Thomas J. Watson Sr. History Home Page