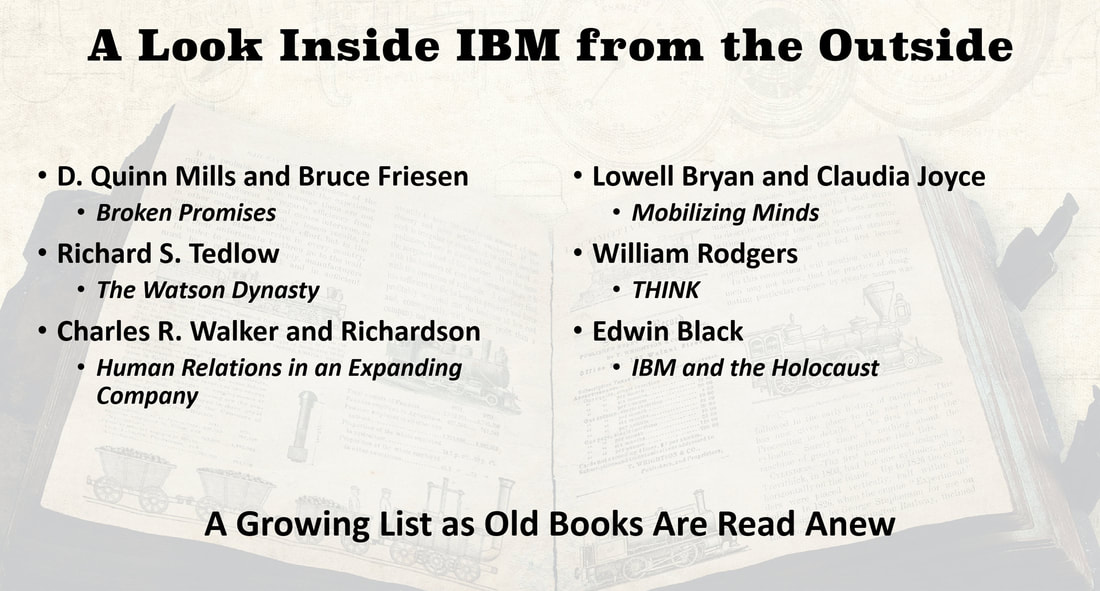 These are books by academics, journalists, yellow-journalists, and, sometimes, those with an ax to grind against the company. Some of these fail the test of accuracy, fairness and balance and are called out as such. Some are blessed with the view of the outsider—an impartial, unbiased and objective look at the company's methods and practices.

This author gives his view on them.

Read these books and form your own opinion.
IBM Outsider Books for Research
The View from Outside: Academia and Analyst Insights
D. Quinn Mills and G. Bruce Friesen: Broken Promises
C. Walker and F. Richardson: Human Relations in an Expanding Company
This is in stark contrast to the views put forward by William Rodgers in THINK (see review below) that IBMers were "semi-citizens." Mr. Rodgers should have spent more time, like these Yale researchers, actually working on site in a corporation or at least staying long enough to get his evaluation  of "Mr. Rodger's Neighborhood" at IBM correct.
Lowell L. Bryan and Claudia I. Joyce: Mobilizing Minds
It is similar to the architect who finished a design for some buildings and wanted to install walkways where they normally would be placed. The CEO asked the architect to delay putting in all the sidewalks for a few months. After a few months he took the architect to the window of his office overlooking the complex and said, "Do you see all the places where the grass has been worn down by people walking where it is most efficient. Finish your sidewalks now."

​Good people adapt - even to the worst of organizational structures. The worst way to "manage the organizational structure" is to keep changing it. This thwarts the efforts of even your best people.
Richard S. Tedlow: The Watson Dynasty
The View from Outside: Failing the Test of Accuracy, Fairness and Balance
William Rodgers: THINK

… They were semi-citizens; by their own consent, they submerged their individuality in a collective society that, in disbursing the reward of collective effort, altered the meaning of freedom."

The book is full of such nonsense. I am sure that he would show a similar low opinion of Henry Ford, Harvey S. Firestone, Alfred P. Sloan, A. B. Farquahar, George F. Johnson, Gerard Swope, Owen D. Young, Elbert H. Gary, Julius Rosenwald or any other great industrialist of Watson Sr.'s time that built this country.

Reading this book, I wasn't so much concerned with Watson Sr.'s ego—as the author seems to want me to be—as the author's that is on display on almost every page. The fact that there is not a single documenting footnote or endnote for any of the outlandish claims in this book should be an embarrassment to the author. Shoddy and slipshod research and writing that is selling through sensationalism rather than strong information supported with references a person can fact check.

If this gentleman was a newspaperman and THINK is representative of his overall work ethic, his genre must have been yellow journalism.
Edwin Black: IBM and the Holocaust
While reading this book, though, I wondered about the Jewish scripture that reads, "Whosoever destroys a single soul, scripture imputes to him as though he had destroyed a complete world; and whosoever preserves a single soul, scripture ascribes to him as though he had preserved a complete world."

Could the phrase "destroys a single soul" be applied not only to the taking of a life, but also to the ruining of a single, good man's reputation? In Tom Watson Sr.'s day it was called an "Act of Calumny." Most individuals today would have to look up the word calumny because, although it is more widely practiced than ever it is rarely called what it is--a despicable act. In the Jewish faith (of which I am not an expert) it appears to be called "lashon hara" or possibly even "hotzaat shem ra." The Catholic Church has similar classifications for such words and actions.

I believe Edwin Black has presented historical information in such a manner as to raise questions about the reputation of a great man; and in so doing, has ruined the reputation of many. It may be factual that IBM technology was used during World War II—just like many other technologies. It is fortunate that we, with IBM resources and people, who were pushed on by the man who is so badly presented in this book—Tom Watson—developed multiple technologies to win the war.

​But did Watson Sr. contribute to the Holocaust? I believe not. Rather, it was his and every U.S. and Canadian IBMer's commitment to winning World War II that brought it to a swifter end. Consider a few contributions of IBM in general and Thomas J. Watson Sr. in particular:
When reading this book keep in mind what Watson Sr. told his salesmen:

​When we read we must always keep in mind that we are not reading just to get the conclusion of the writer, because if we do that we are just getting one man's view. We must read and keep in mind the fact that we are reading to stimulate our own thoughts; we should take the points and the ideas and the suggestions that we get from this reading and apply them in our own way and in our own work.