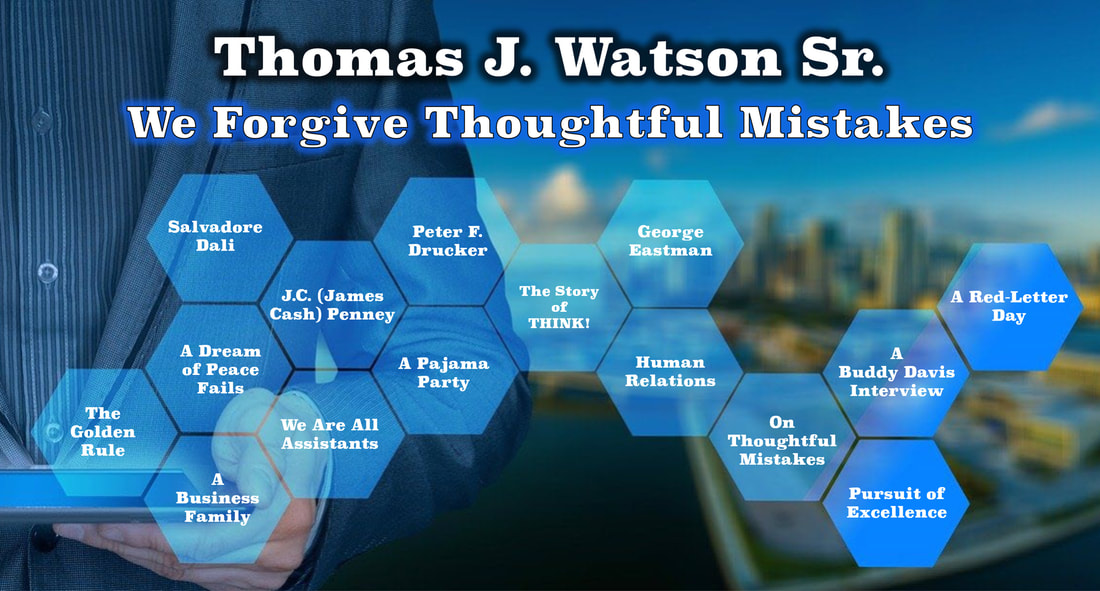 We Forgive Thoughtful Mistakes
Tom Watson Sr. possessed honorable beliefs, deep convictions and a desire to speak to a man’s heart but he lacked an orator's elegance and stage presence. Watson Sr. performed off-stage; his actions more than his words changed opinions and produced an unshakeable loyalty that touched the IBMer‘s heart.

This is one of those off-stage stories.

​Handed down by tradition.
IBM had survived The Great Depression. Gambling on a post war boom, Watson Sr. had maintained IBM’s employment levels by increasing inventories when there was little demand. Excess machinery and parts crowded basements and filled every nook-and-cranny of Endicott's warehouses.
​
Some on the board of directors, because of this, were lobbying to remove Watson as IBM's President. He needed these inventories sold.

A very large government bid, approaching a million dollars, was on the table. The IBM Corporation—no, Thomas J. Watson Sr.—needed every deal. Unfortunately, the salesman failed. IBM lost the bid. That day, the sales rep showed up at Mr. Watson’s office. He sat down and rested an envelope with his resignation on the CEO’s desk. Without looking, Mr. Watson knew what it was. He was expecting it.

He asked, “What happened?”

The sales rep outlined every step of the deal. He highlighted where mistakes had been made and what he could have done differently. Finally he said, “Thank you, Mr. Watson, for giving me a chance to explain. I know we needed this deal. I know what it meant to us.” He rose to leave.

Tom Watson met him at the door, looked him in the eye and handed the envelope back to him saying, “Why would I accept this when I have just invested one million dollars in your education?”
Return to the Thomas J. Watson Sr. History Home Page