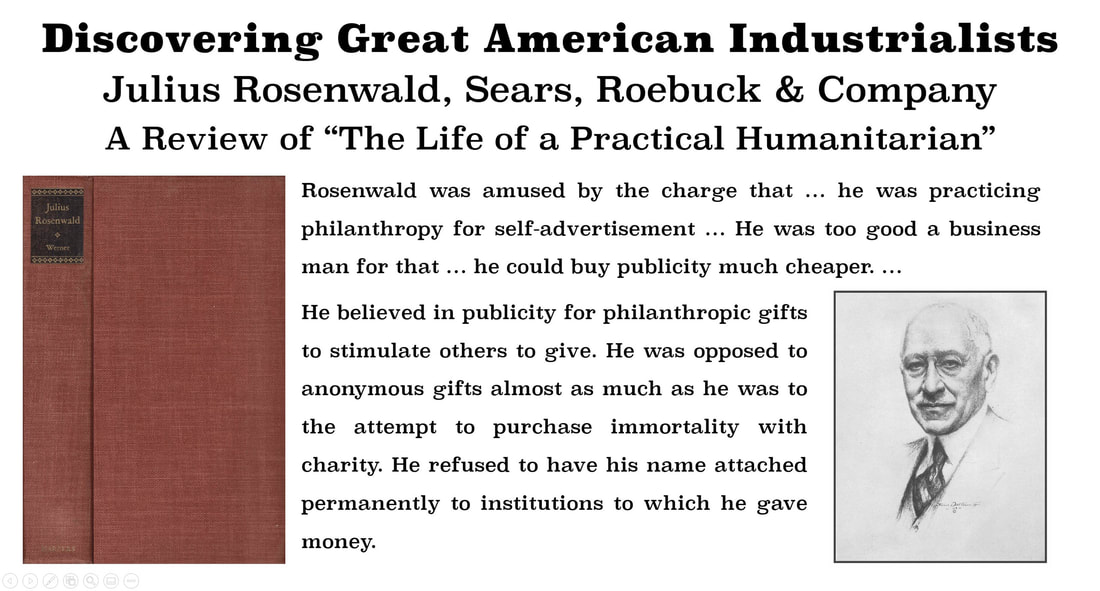 In the first place [Julius Rosenwald once said] philanthropy is a sickening word. It is generally looked upon as helping a man who hasn't a cent in the world. That sort of thing hardly interests me. I do not like the "sob stuff" philanthropy. ​What I want to do is to try and cure the things that seem to be wrong. I do not underestimate the value of helping the underdog. That, however, is not my chief concern, but rather the operation of cause and effect.

​I try to do the thing that will aid groups and masses rather than individuals.
W. R. Werner, Preface to Julius Rosenwald: The Life of a Practical Humanitarian
​A Review of "Julius Rosenwald: The Life of a Practical Humanitarian" by Werner
Reviews of the Day: 1939
This excellent biography describes not only his [Julius Rosenwald's] virtues but his mistakes.
The Cincinnati Enquirer, December 23, 1939
Education, the Negro and his problems, Jewish resettlement projects, and public health are some of the subjects which engaged Rosenwald's philanthropic interests. Mr. Werner writes in detail about all these, especially the Negro benefactions. And this is an aspect of Rosenwald's life which affects Georgia and the south in particular. The new vice chancellor of the University System of Georgia, it will be recalled, came to his new position as director of this phase of the work of the Rosenwald Foundation.
John E. Drewry, New Book News, The Atlanta Constitution, August 11, 1940
Selected Insights from "The Life of a Practical Humanitarian"
This Author's Thoughts and Perceptions
I found Mr. Rosenwald very human and very logical, but almost too practical to an extreme.
Julius Rosenwald: The Life of a Practical Humanitarian lives up to its title. Mr. Rosenwald is portrayed in every respect as practical whether it is in business in only paying competitive wages at Sears, Roebuck & Company or in his philanthropy to very worthwhile causes that are innumerable in a short review.

Even when he was moved with sentiment to right an existing wrong, he sought others to match his funds. He preferred making a change permanent rather then only providing temporary relief with a donation. He did not want to lift a person from poverty, but enable the man or group of individuals to lift themselves. Reading this I remembered my father's advice when he was teaching at a local vocational school, "It is better to teach a starving man how to fish rather than to just give him a fish." Practical, yes?

​Julius Rosenwald, the distinguished Chicago merchant and philanthropist, whose death this week caused a wave of sadness to sweep the world, exemplified the potentialities of American youth. Born in rather less than moderate circumstances, he rose to be one of the most respected citizens of his era. His wise philanthropies have done much to improve the condition of the peoples of the world, especially those of this country. …​

IBM …​ feels the deepest regret at the passing of an individual whose influence stands as a landmark of education, humanitarianism, and business progress.

​One of the more important insights from this book was the impression how different individuals can view philanthropy in so many different ways.
​If one believes in diversity of thought, these three men exemplify a reasonable diversity in their handling of their money while still motivated to right wrongs or redistribute wealth.
Return to the Industrialist Bibliography Home Page