DISCERNING READERS
"An institution is the lengthened shadow of one man.  . . . All history resolves itself very easily into the biography of a few stout and earnest persons."
Ralph Waldo Emerson, "Self-Reliance" 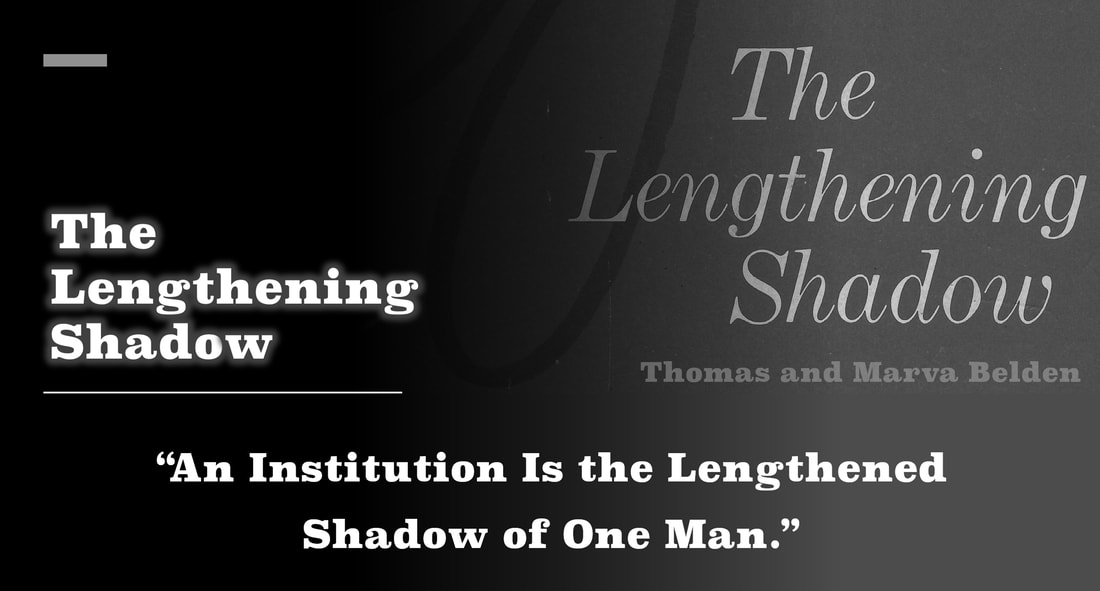 The following excerpt from Emerson's "Self-Reliance" is far more applicable in the study of the life of Thomas J. Watson Sr.

"Character teaches above our wills. Men imagine that they communicate their virtue or vice only by overt actions, and do not see that virtue or vice emit a breath every moment. … The voyage of the best ship is a zigzag line of a hundred tacks. See the line from a sufficient distance, and it straightens itself to the average tendency. Your genuine action will explain itself, and will explain your other genuine actions."

It is now possible to look at the many "tacks" of Watson Sr.'s life and see his character "straighten itself to the average tendency." His "genuine actions" most any man or woman would be proud to emulate.
Peter E. Greulich
Two Perspectives on "The Lengthening Shadow"
"The Beldens agreed to provide IBM with the manuscript for a set fee, without royalty rights. The contract stipulated that it would be a 'disinterested' work, and if IBM accepted it without demanding 'substantial changes' it would be published with the names of the authors. But if IBM was unhappy with the manuscript, it could not be published under their names. As it turns out, IBM accepted the manuscript as it was written. The authors believe the treatment to be factual and that they neither skipped nor glossed over any major events in the life of IBM's founder. The title was inspired by Ralph Waldo Emerson's line, 'An institution is the lengthened shadow of one man.' Mr. Watson used to quote It quite often. The authors stated that, 'We really stole it from him.'

"The Beldens started on the book in 1957. Thomas Belden did some research at Endicott, and at Watson Sr.'s birthplace near Painted Post. The book starts with Watson's early years, covers his career and troubles at NCR, IBM's antitrust problems, and its growth."
"Biography of the late Thomas J. Watson out July 26," The Binghamton Press, June 24, 1962
Peter E. Greulich's Perspective
Peter E. Greulich has written a book review of The Lengthening Shadow. He believes that the work was well done but also finds much to agree with in the Binghamton Press editorial which was written at the time of the books publication.

There were some major oversights in the Belden's research and delivery of the final product. The final product was "too disinterested" and in attempting to not write a "eulogy," the Beldens missed much of the greatness of Watson Sr. outside of the business of IBM. These shortcomings are mostly in the area of Tom Watson's humanitarian works. It is impossible to separate Watson—the business man, and Watson—the humanitarian, as they were closely intertwined. He used his corporation to do good works in the service of mankind.