DISCERNING READERS
A constitution beckons to men and women of service who are willing to change everything about themselves except for a fundamental set of beliefs. This constitution at IBM was referred to as "The Basic Beliefs." 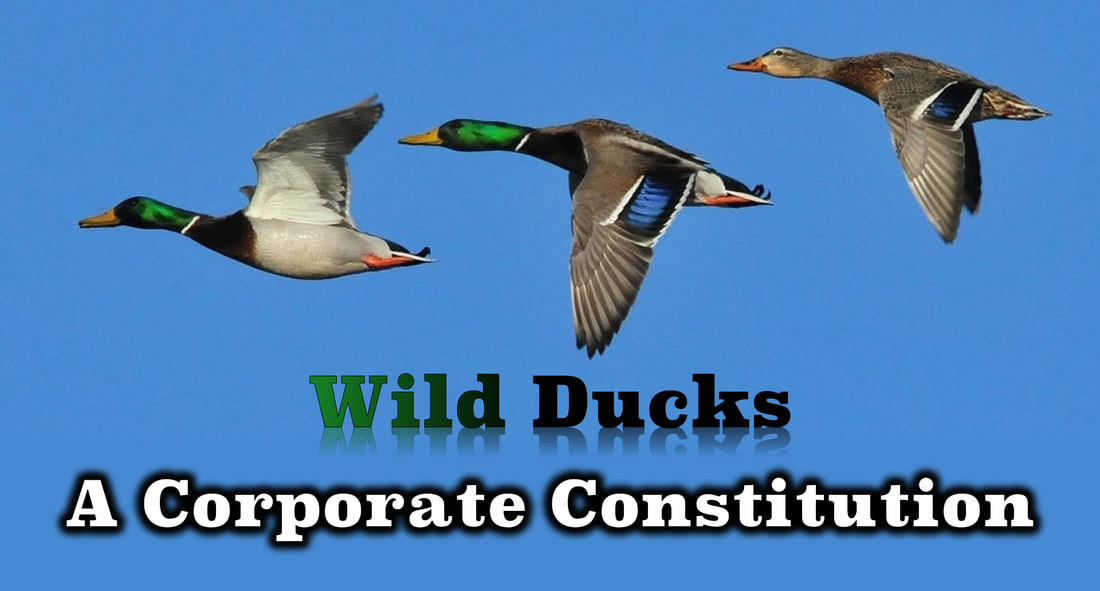 One of the best definitions that I have found for a constitution is on Australia’s House of Representatives website. I have modified it to summarize what IBM’s Corporate Constitution meant to its 20th Century employees:

IBM’s constitution was a set of rules that established internal and external corporate governance. The constitution legitimized leadership, and it empowered and emboldened followers. For forty-two years IBM’s constitution evolved by word of mouth—tradition and folklore, but then these traditions were given shape and form. They were simplified, codified and written down as three basic beliefs.

In some corporations, edicts form the constitution and can be changed. IBM’s constitution was not a set of practices, plans or legal documents, but rather, it was the foundation for its practices, plans and documents. IBM’s beliefs were the supreme law of the land. They overshadowed everything. Adherence to them legitimized power at all organizational levels.

Even the corner office, to legitimize its authority, was subject unto them.

​IBM had its greatest growth under this constitution, and it was a constitution of only three words: Respect, Service and Excellence.​
IBM's Corporate Constitution: The Basic Beliefs 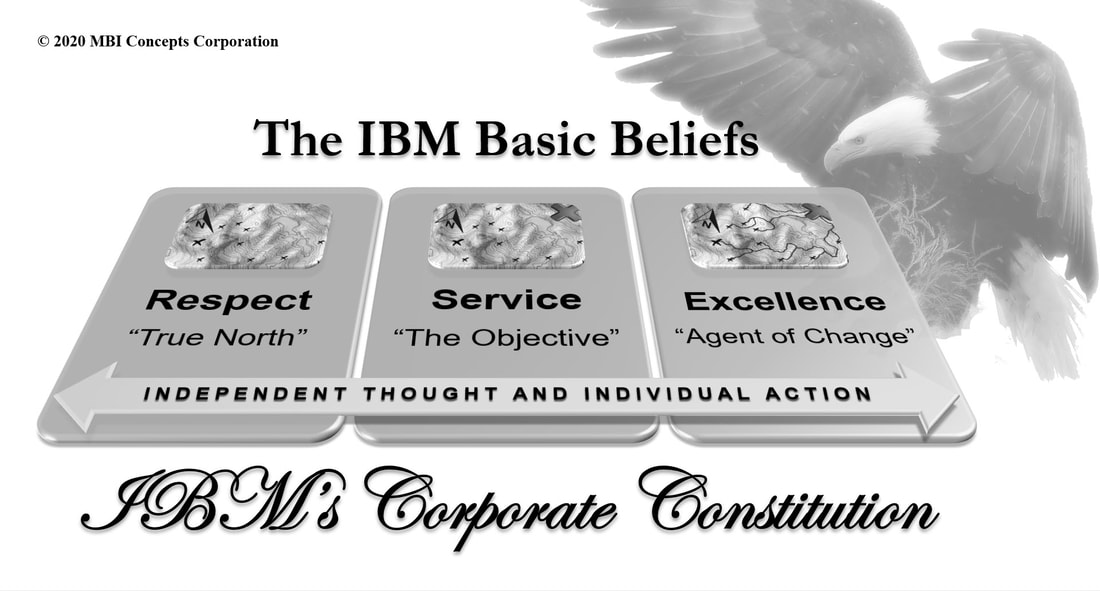 A corporate constitution that is unforgettable, pervasive, and inclusive serves as a compass to guide individuals across rough organizational terrain. A constitution beckons to men and women of service who are willing to change everything about themselves except for a fundamental set of beliefs.
​
This constitution at IBM was referred to as "The Basic Beliefs."
The Characteristics of a Corporate Constitution
​Whatever form a corporate constitution takes it must provide three things: (1) It must provide a consistent, ever-present, guiding light—a “north star” by which individuals navigate rough organizational terrain; (2) It must provide the mechanism by which the organization defines its objectives—goals that aren’t necessarily monetary but—if achieved—rewards success with a monetary gain; (3) It must provide an internal mechanism that demands an ever-constant evolution—it should institutionalize change.

A constitution holds a leader accountable, legitimizes his or her leadership, and ensures all employees’ opinions are heard. If a constitution is simple, memorable, and repeatable, employees carry those beliefs in open sight. They strap them to their hip—ready for action as needed.

IBM’s constitution wasn’t a lengthy, verbose or legally complex document, but exactly the opposite. It was three words.

In 1956, before IBM could decentralize business operations and personnel decisions, Thomas J. Watson Jr. needed a common, simple, and unifying belief system. So, he called a meeting in historic Williamsburg, Virginia, a meeting he meant to carry the aura of a “constitutional convention.”

Thomas J. Watson Jr. speaking to IBM's top executives in Williamsburg, Virginia: A Constitutional Convention
Decentralization under Constitutional Control
It was the beginning of a new IBM as enormous powers were delegated to employees. Watson Jr. established a system of checks and balances he referred to as IBM’s “contention management” system. But this contention system would have never worked without the guidance that the new chief executive officer provided through three words—words that became the substance of possibly the world’s first corporate constitution: respect for the individual, service to the customer, and the pursuit of excellence.

This constitution sorted through and simplified Tom Watson Sr.’s multitude of maxims down to a set of three basic beliefs that enabled stakeholders to find common cause with each other, tempered rivalries and differences, and continued to point everyone in the right direction – without the chief executive officer’s physical presence. This corporate constitution redirected stakeholder loyalty away from the individual sitting in the corner office to the overall company.

Through their common belief system, the Watsons achieved almost six decades of consistency. Watson Sr.’s belief in (1) giving full consideration to the individual employee; (2) spending a lot of time making customers happy; and (3) going the last mile to do a thing right, evolved into Watson Jr.’s (1) respect for the individual; (2) service to the customer; and (3) the pursuit of excellence, or simply—as most IBMers knew them after the ’60s—respect, service, and excellence. This consistency was important in maintaining the loyalty and focus of the entire stakeholder community.

So, the changes that did occur in the handoff between father and son were differences in temperament, style of communication, structure of organization, and implementation of processes, not changes of substance.
But Was Thomas J. Watson Jr.’s "Constitutional Decentralization" Successful?
Is there any proof that Watson Jr.’s constitution-driven, decentralized IBM was successful?

In 1956, Tom Watson Jr. inherited a company that was famous for high pay, generous benefits, and an intense devotion “to Dad.” Internationally, after four decades, corporate employment stood at 56,000, revenue at $700 million, and net income at $73 million.

Under Watson Jr.’s watch, IBM became the corporation his father had always envisioned.

Excerpt from THINK Again!
​Yes, Watson Jr.’s decentralization was successful. He accomplished his and his father’s goal with a three-word constitution that encouraged independent thought and emboldened individual action—the only restraints being the constitution itself. All the while, it kept everyone aligned around common objectives.

At its most successful, IBM was a decentralized, independent-thinking, constitution-driven corporation.

Let’s study, analyze and discuss IBM’s three-word constitution:
​
Roam Around the IBM Wild Duck Information with the Links Below
or [Return to the Wild Ducks Home Page]