A View from Beneath the Dancing Elephant: Preface 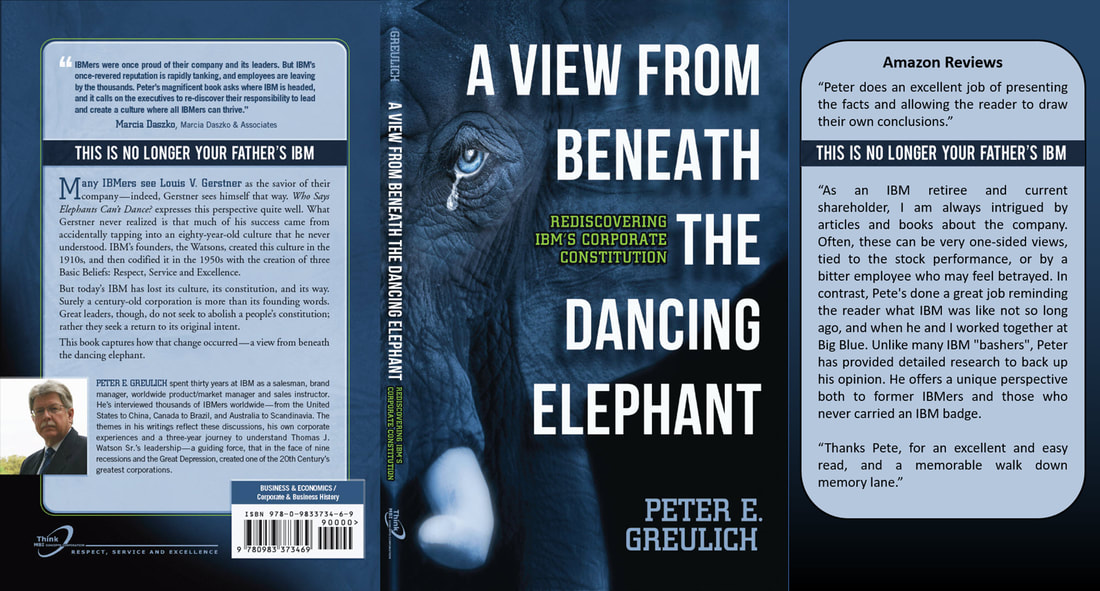 A preface, which is included in the front matter of a book, is the chance for the author to speak directly to his or her reader about why the book was written, what it's about, and why it's important.

This is the Preface from A View from Beneath the Dancing Elephant.
Preface from "A View from Beneath the Dancing Elephant"
Preface to A View from Beneath the Dancing Elephant
The Executive Team Has Stopped Listening to Their Employees
In the short time frame from conception to realization of this book, this corporate metropolis expanded 20%, from 341,279 employees to 405,535, then contracted 30% to 278,039, only to grow again by 70% to a historic peak of 466,995. The strain this would put on any social infrastructure is unimaginable. Therefore, although economics may write headlines, we must push past just an economic evaluation. It was a century-old social network that held IBM together, and that’s what we must study to assess its future.
Why So Many Divergent Views on Louis V. Gerstner?
Although my opinion is only one of many, I have interviewed thousands of IBM employees over my thirty-year IBM career. We are an opinionated bunch, and our perspectives on change at IBM are as diverse as the company is old. I dislike stereotypes, and I believe that "the only true generalization is that all generalizations are false." But there are similarities in IBMers’ views.

​There are three distinct generations of IBMers when it comes to evaluating Louis V. Gerstner.
​
Once upon a time, IBM’s Basic Beliefs were the corporate constitution that bounded all of Big Blue’s decisions. The elder generation sees them as principles that encouraged independent thought and empowered action. The new generation, if they are even aware of them, sees them as nice words and not much else. The transition generation lives with their loss.
​
This book is just one perspective, humbly offered, from a member of the transition generation.
IBM Has Lost Its Internal Sense of Community
Peter F. Drucker once leveraged an eighteen-month study of General Motors to become one of the preeminent management philosophers of the twentieth century. Decades earlier, Tom Watson Sr. had already utilized an uncanny sense of community to achieve the same ends. I offer the insights in this book as an addendum to Drucker’s work because we need more servants of business—and fewer masters.

Change occurs slowly in a society of a half million people. Change may impact one generation but not the next; change may affect one geography and no other; or change may divide executive and employee. But universally, the Basic Beliefs no longer unite generations of IBMers. This is the century’s most significant change.
IBM must rediscover its Corporate Constitution—its basic beliefs of Respect for the Individual, Service to the Customer and the Pursuit of Excellence.
Return to "Beneath the Dancing Elephant" Information Home Page