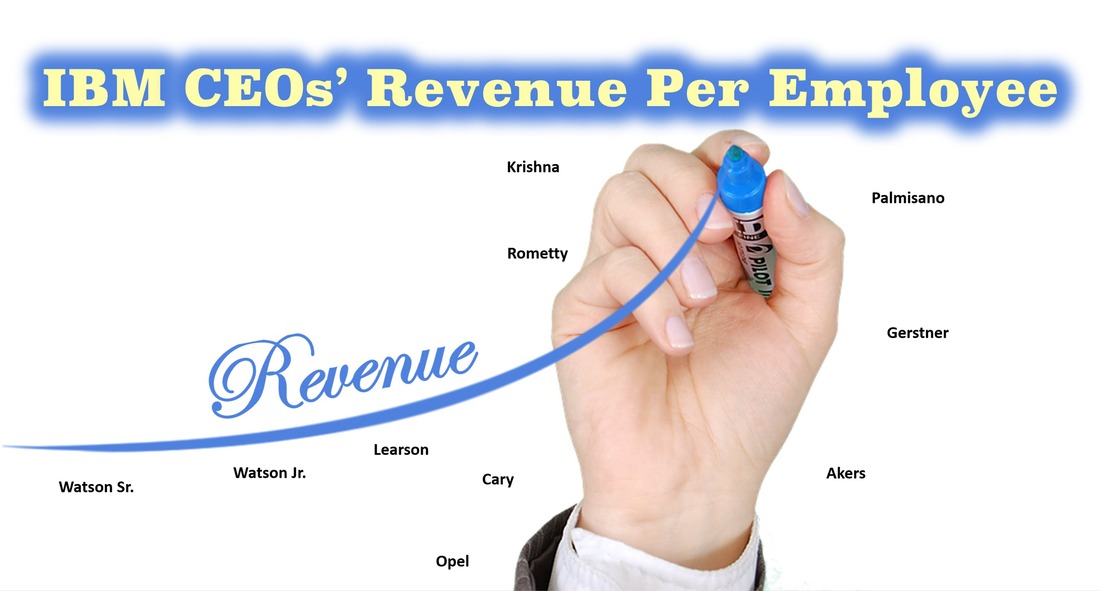 "​To establish sales morale, it is essential to start building at the top of the organization. The old idea that those in administrative positions should be autocrats has gone. The day of the section boss in business has passed. Every manager in every department of business, in factory, office or field, should remember that his duty is to help the men under his direction."
Thomas J. Watson Sr., 1930
IBM Chief Executive Officers' Revenue Per Employee (Sales Productivity)
​Revenue per employee (sales productivity) is a common productivity metric that determines how effectively a corporation is using its sales organization, and, what most analysts fail to understand, ensuring that the whole corporation supports sales to drive revenue. Visualizing sales productivity changes over time is an effective tool to evaluate the effectiveness of a corner office in maintaining an integrated, cross-corporation sales "organization."

This measurement is hard to "game" but it is possible through such practices as channel stuffing. The author worked for an IBM executive who used this practice. He ran promotions to stuff the reseller channels at the end of the year, only to have most of the shrink-wrapped product returned in the first quarter of the following year. Other examples, in the case of IBM, can be sacrificing profitability to meet a quarterly revenue target by discounting long-term enterprise agreements to pull in revenue from out years.

​Though it is only one of many measurements for evaluating the overall health of a corporation, this particular one—especially when evaluated over extended periods of time—is effective in showing gains or losses in an organization’s effectiveness at designing, producing, and marketing competitive products. The sales person is only the tip of the spear.

Facts worth noting: As you review these charts, consider what an anomaly it was for IBM's sales productivity to flatten in 1995 and to then start a two-decade-long drop in 1999. As shown in the chart above, this was the first time that IBM had experienced more than a single year's drop in revenue productivity since The Great Depression—six decades earlier. Not even during the Financial Crisis of 1992-93—when IBM recorded an $8 billion loss—did sales ever fail to produce more revenue per employee.

Although this 21st Century downturn in employee revenue productivity is not as visible or as memorable as IBM's first profit loss in 1991 or its largest loss in 1993, it is just as significant because it occurred during The Great Expansion—the longest period of U.S. economic growth ever measured by the National Bureau of Economic Research (shown below).

What caused IBM's sales productivity to flatten in 1995, and start in 1999 what is now a two-decade-long decline?

Especially, during a time of such economic expansion?
The Tipping Point for IBM Revenue Per Employee (Sales Productivity): 1995 – 1999

Facts worth noting: It was Tom Watson Jr.'s historic gamble in the early 1960s that made IBM what it was in the 20th Century [The Greatest Business Risk of the 20th Century]. He could not have accomplished this without T. Vincent (Vin) Learson—covered on the next chart—at his side.

Facts worth noting: Frank Cary did a tremendous job keeping sales and sales productivity rising during the economic, competitive, and political storms of the '70s. On the economic front, a new term came into being to define a decade of persistent high unemployment combined with high inflation that depressed demand: stagflation. On the competitive front, old competitors merged, new competitors emerged, and the list of competitors lengthened. On the political front, the U.S. Justice Department filed an antitrust suit against IBM; this lawsuit would taint every internal business discussion and every external business strategy for the next thirteen years. In addition, twenty-four private antitrust lawsuits piled on, and Japan entered the U.S. political and economic scenes as a competitor.

Facts worth noting: Opel put processes in place to encourage every customer to purchase their rental equipment, which temporarily inflated revenue (and earnings). In the space of four years, John Opel replaced an annual, $1 gold piece with a one-time, devalued $2 paper note. It was a fire sale, pulling in revenue and profits from out years.

It was financial engineering: following a short-term, financially expedient path at the expense of the long-term health of the business. In 1957–58, Watson Jr. refused to take this path.

Facts worth noting: As the chart shows, John F. Akers' problem wasn't his sales force or his products. It was the expectations the corner office set for the corporation in the market place, spending as if it could achieve those expectations, and his poor leadership that negatively impacted the morale of an entire corporation of several hundred thousand individuals.

Sam Palmisano talked endlessly about the corporation's focus on profitability and earnings per share, but it is hard to hit a profit mark if a corporation isn't producing products that are in demand and easy to sell. ​The chart above shows flat revenue per employee for the ten years. Meanwhile, the corporation added 100,000 employees to its payroll—a 27% increase.

​This should have been a warning sign to analysts long before Virginia M. Rometty took over the corner office.

Facts worth noting: George Ed Smith was the chief executive that took Royal Typewriter from a middle-of-the-road company to the number one typewriter corporation in the world. He accomplished this feat with an amazing focus on making manufacturing (development in a software organization) meet a customer's unique needs and executing the sell with a flair for the outrageous: a Ford Trimotor airplane (largest in its day) parachuted the new portable typewriters to dealers all over the country—supposedly to meet the high demand.

​This was the question he told salesmen to ask when looking for a job:

"What do you know about selling? My success will depend 25 per cent upon what I do and 75 per cent on what you have already done to make selling possible [great processes to bring great products to market]. ​Can you give me any assurance that I shall not waste my time with you?"

Of course a true salesman's ego would rarely let them admit this 25-75 rule, but it is a fact. IBM knew that a salesman that "could sell anything" was not a salesman that lived on repeat sales based on customer relationships. Virginia M. Rometty, really never carried a bag for IBM or she would have understood the meaning of Ed Smith's quote. She had a problem larger than her sales force could overcome.

​She had a cross-corporate, sales-execution problem that needed her executive focus.

Facts worth noting: It appears that IBM spent $35 billion and did not improve sales productivity.
Return to "Who Was ibm's greatest ceo?" Home Page