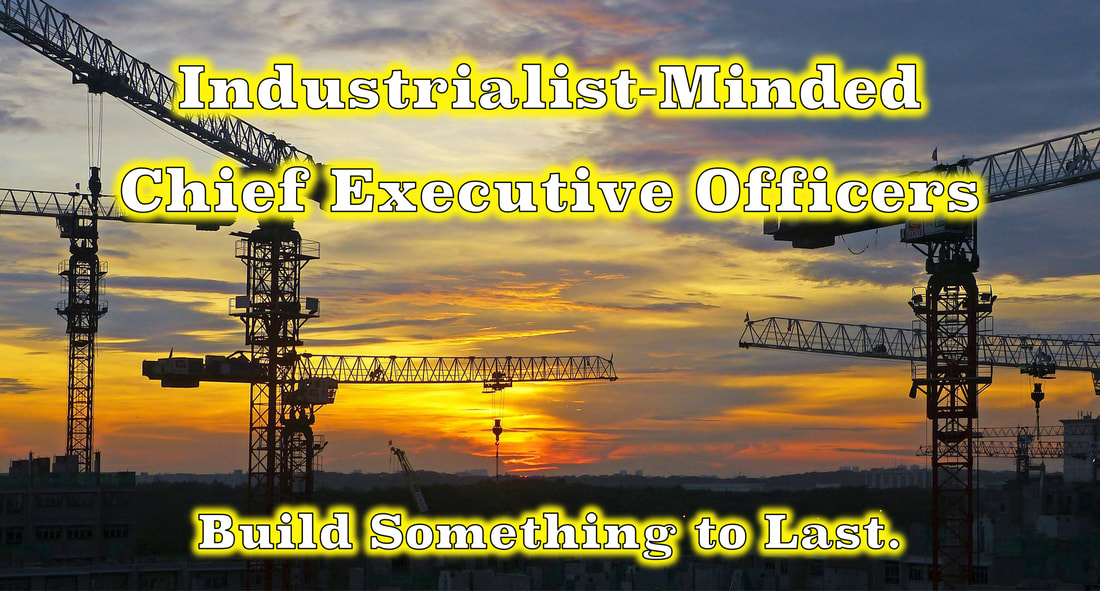 The purpose of this article is to make the words "capitalist" and "industrialist" be born again and live for the reader.
May these words smile as the reader understands their true meanings within the context of American history.

Words like people have gender: some are masculine, some feminine, others neuter. English is one of the few languages which does not make a differentiation; but even in English we sometimes give a definite gender to things, as: "Look at that ship isn't she beautiful?" This animism of languages [The belief that objects have souls that may exist apart from their material bodies.] does not stop at genders!

​Words may also be hurt or be sad, as when they are mutilated . . . or when their meanings are used incorrectly; but they smile when we use them correctly and with elegance.

​When we look up the meaning of a new word, that word comes to life that day for us. It is born and it lives.

Ferdinando D. Marino, "The Tragedy of Words," 1947
Capitalism Needs Industrialist-Minded Chief Executive Officers
What is the Difference between a Capitalist and an Industrialist?
Yet, without a doubt, the majority of Americans think of these men as exemplary "capitalists." Although exemplary, they did not think of themselves as capitalists – far from it.

These individuals preferred the term and classification of "industrialist." Even though they are no longer around to guide today’s leaders, their spirit and their insights live in their biographies, autobiographies, speeches and press interviews. Even as their words have become more electronically accessible, their thoughts are the internet equivalent of little-referenced manuscripts gathering dust on a bookshelf [Here are a few recommended industrialist biographies with reviews].
Industrialists within a System of Capitalism
Much of the fallacy of thought concerning industrialists and capitalists is hidden in the evolving definition of the word capitalist. The word’s meaning has been extended, and these new extensions have been applied retroactively to these individuals. Today, capitalist is used in at least three ways: (1) a person who has capital invested in business enterprises—usually an extensive amount of capital, (2) a very wealthy person or (3) an advocate of capitalism.

​Let’s deal with these in reverse order.

Capitalists love capitalism but being an advocate of capitalism, in the past, did not make a person a capitalist. These industrialists were all proponents of the economic system of capitalism but did not consider themselves capitalists. Secondly, capitalists in the early 20th Century were wealthier than the masses. The wealthy had cash in enough abundance to fund growing businesses, but to these early business founders, a wealthy person was not necessarily a capitalist—one who provides investment capital. Although when they desperately needed funds, they probably wished that every wealthy person was a capitalist.
The returns of capitalists were considered in making decisions but when there was a strong chief executive in place, capitalists were rarely able to influence long-term, strategic business decisions. Harvey S. Firestone did not look kindly on chief executives who acted like capitalists.
"The moment that officers or directors of a company begin to speculate in its stock, the ruin of the company is not far away, for it is impossible to serve both the company and the stock market."
Harvey S. Firestone, Men and Rubber: The Story of Business
"It is utterly foolish for capital [capitalists] or for labor [employees] to think of themselves as groups. They are partners. When they pull and haul against each other—they simply injure the organization in which they are partners and from which both draw support. …

"He would produce wealth by stopping the production of wealth."
Henry Ford, My Life and Work, 1922​
Here a Capitalist, there a Capitalist, everywhere a Capitalist - Capitalist
“Business exists to provide a service to MAN — service to consumer man, to worker man, to investor man, and to the community of man.”
​
THINK Magazine , July1956 [See Footnote]
Today, more so than any time in the history of capitalism, we embody in ourselves every aspect of these four stakeholders: consumers, employees, shareholders and society. With the advent of mutual funds, IRAs, 401(k)s in the private sector, and 403(b)s in the public sector, excess capital is being put to work to grow businesses through these instruments. The main difference is that these individuals are “closet capitalists.”
​
So, the definition of the 20th Century capitalists should be modified to reflect the new state of affairs: A capitalist is a person who has money invested in business enterprises—which may be an extensive amount of capital or minimal amounts accumulated into extensive amounts through mutual funds and retirement accounts such as a IRAs, 401(k)s or 403(b)s. Because of this shift in ownership, it is critical that there is a sustainable shareholder ecosystem which is balanced in its distribution of profits. More so today than ever before in the history of capitalism, it is deleterious to short shrift one stakeholder at the expense of another, such as labor for the perceived benefit of capital. In fact, it may be impossible!
​If employees feel insecure in their jobs they will opt out of risky investments in stocks, and businesses will feel the effect of falling stock prices as workers withdraw their money (or quit investing) in such accounts.

Capitalism requires a sustainable stakeholder ecosystem.​
Capitalism’s Foundation is a Strong Stakeholder Ecosystem
​There is a natural tension between the four stakeholders in a corporation. It takes a strong chief executive officer to take the profits of a corporation and equitably distribute those gains between his or her stakeholders in such a manner as to strengthen these relationships and not weaken them. This is what great chief executive officers of the 20th Century did. They understood that their first job was to make their business profitable, but that their job also required a strong sense of fairness supported by even stronger communication skills to openly discuss the needs of each stakeholder. Their intent was to build a sustainable stakeholder ecosystem which would—in turn—protect the profitability of their corporations.

It is an economic sickness.
The Author’s Perspective
​As written above, Henry Ford understood the necessity of a sustainable stakeholder ecosystem. At Ford Motor Company, he maximized shareholder value, maximized customer value, maximized employee value and supported the economic and political societies they shared. As an example, his shareholders were rewarded beyond their wildest dreams: an investment of $10,000 in 1903 had, in thirteen years, delivered $6.6 million in dividends and was worth $35 million. This is a compounded annual rate of return of – wait for it – 89.8%.
This story is one of the most dramatic examples of shareholder-first and -foremost in the history of capitalism. In a very public manner, industrialist and capitalist (the shareholders) went to war. After the shareholders won a major battle in court, Henry won the war by staging an executive coup through the press. He took back control of his company [read the whole story here].

In this case, the chief executive stood tall for his company and his customers. This is not the case with many chief executives today. In this new century, instead of investing in a monumental project equivalent to building a River Rouge plant or shipping an industry-changing product like the System/360, the first three chief executives of IBM have invested in their own stock to construct a $200 billion paper pyramid. If a recession similar to the one a hundred years ago occurs—the Recession of 1920-21, it will burn this pyramid to the ground. Our economy and our country need stronger and more balanced chief executive officers.

What are the qualities a director should look for in a chief executive officer?

As long as a corporation's board of directors finds and hires these qualities, the following words of Thomas J. Watson Sr. spoken at the Boston Jubilee on May 18, 1950 will continue to ring true:

As I look into the future I see better things out there than I've ever seen before. We've built a capitalist system that nothing can ever shatter.