A Review of "Famous Leaders of Industry: Sixth Series" 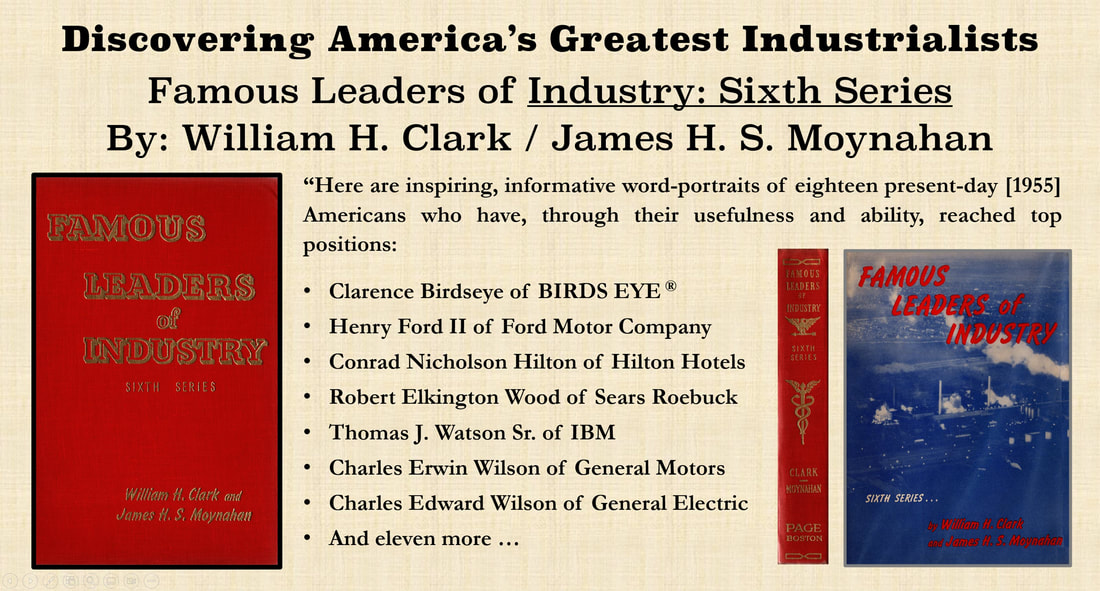 ​“The subjects of these biographies may be said to have at least one thing in common: success. … The reasons for the successes of these men vary as greatly as their personalities, which range from the exuberance of Conrad Hilton to the emotionless, good nature of Alf Fuller. …

"Each man has one paramount human quality which stands out as the strongest factor in his progress: Howard Johnson’s perseverance, Sinclair Weeks’ sense of duty, Clarence Birdseye’s imagination. … These men, then, are complex combinations; they are causes, effects, ideas and influences. …

“An inspirational book for young men planning or embarking on a career, it is interesting reading for all of us. Additional assets are the sketched portraits of the men and the glimpses into their personal lives.”

The Durham Morning Herald, “Industrialists,” April 15, 1956
Clark and Moynahan on "Famous Leaders of Industry: Sixth Series"
“Until Henry Ford II became president in 1945, the Ford Motor Company … was widely regarded as the foremost example of industrial feudalism. … Because the Ford cars were low-priced, of good quality, and serviceable, the company prospered mightily. … But in the early thirties, things began to go adversely. Ford slipped into second place. … The public knew that Ford cars were still good, but other manufacturers were making cars just as good and more attractive [General Motors for one under Alfred P. Sloan Jr.]. …

“Henry Ford II has improved things with his fellow-workers. He has improved relations with his dealers and suppliers. And he is working on the broader field of public relations. … He has made his cars stylish, larger, and better. … they are the last word in style and beauty. In the old days, the public wanted cars that were cheap and dependable. … Now cars are styled to meet the increasing demand for beauty. …
“Now the Ford is smooth and sleek, and still dependable as ever.”
​​On Charlie Erwin Wilson of General Motors
“During World War II, … Wilson led the resources of General Motors. … The number of items produced was amazing. …

​"General Motors produced almost a quarter of all tanks, armored cars, and airplane motors manufactured in the United States; about half of all machine guns and carbines; two-thirds of all the trucks of two-and-a-half tons and over, and three-fourths of all Diesel engine horsepower used in the Navy.”
On Charlie Edward Wilson of General Electric
“On January 1, 1940, Charlie E. Wilson … took office as president. … Almost immediately Wilson began to revolutionize company policy. He proceeded to decentralize command and to delegate authority more and more to responsible executives. Products once assembled from parts made all over the country were made by individualized manufacturing units under a specializing department head. …

​"Swope had worked miracles, but revision of the paralyzing over-centralization had been long overdue.”
This Author’s Thoughts on "Famous Leaders of Industry: Sixth Series"
But there was a real lack of depth in this anthology. If conducted, few personal interviews were referenced. No references to personal interviews with employees, administrative assistants, or peers concerning these individual. It was as if a person was only being shown their reflections on the surface of pools—deep pools where experience and wisdom awaited discovery in their depths. The authors do not reveal what was stirring in the recesses of their subjects’ character. They failed, in most instances, to cover their most basic of beliefs and ideals.
Still, with non-fiction books—especially on leadership, I read them from cover to cover. Of course, with some books, there is a lot of skimming, but usually I will find a chapter or two that was worth the effort.

The best chapters were on:
​These chapters as a whole weren’t great, but there were a few small nuggets—tidbits worth highlighting, which were shared above.

Not much reason to read this book—sixth in the series, unless you are interested in the basic ABC’s of an individual’s life. Overall, unfortunately, this book was too much like reading a Wikipedia biography: basic information provided in an overly listless and dull manner—with very few, well-researched, personal insights into the character of these individuals.

If more detailed information on individual industrialists is available on this website, I have provided links in the following list of leaders covered in this book.