A Review of "Herman Hollerith: Forgotten Giant of Information Processing" 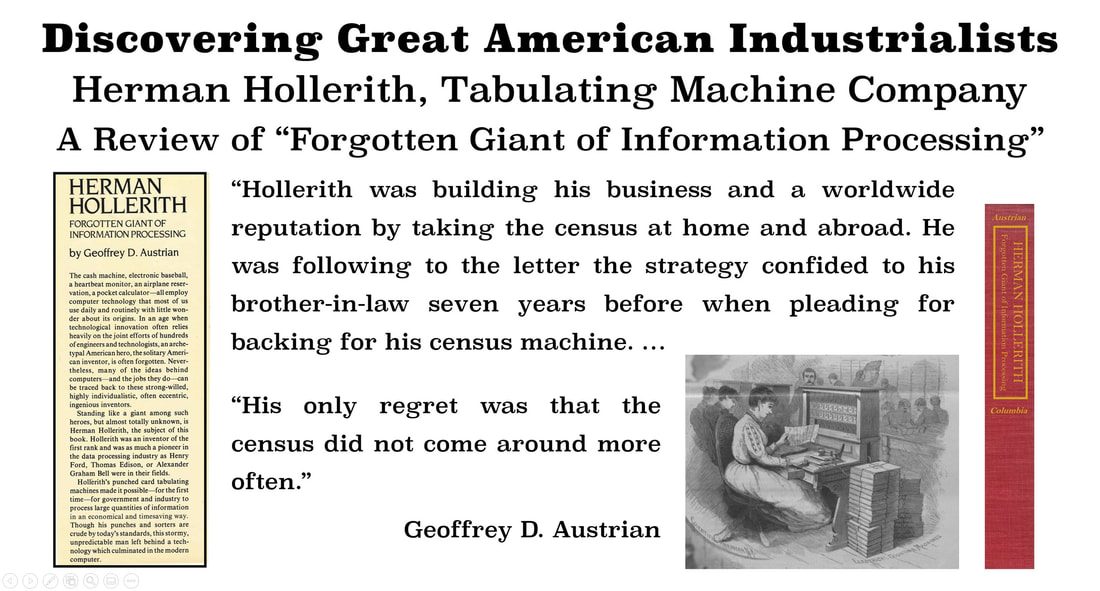 Sample information
​A Review of "Herman Hollerith: Forgotten Giant of Information Processing"
Reviews of the Day: 1982
There were no reviews of the book found in or around the years of publication.
Selected Insights from "Forgotten Giant of Information Processing"
The importance of Herman Hollerith
So many questions that may still be relevant today
Hollerith's life raises questions that go beyond the scope of this book.​Or are such characters to be relegated to the movies and the depths of the national psyche?
Editor's note: Does the name Elon Musk come to mind? American capitalism is a wonderful thing, isn't it.
This Author's Thoughts and Perceptions
To understand IBM and Tom Watson Sr. requires an understanding of the history of the tabulating machine and its inventor and entrepreneur, Herman Hollerith. The singular book available for this task is Geoffrey D. Austrian's Herman Hollerith: Forgotten Giant of Information Processing. Mr. Austrian's narrative is a wonderful tale of genius at work. He also connects magnificently Mr. Hollerith and Watson Sr. with some interesting insights unavailable anywhere else. For instance, he writes of an incident when Watson was at NCR:

"He [Tom Watson Sr.] had called upon the Eastman Kodak Company in Rochester, New York, where he had seen some Hollerith machines in action. Impressed, he had gotten NCR to order some on returning to Dayton, but Hollerith, fearful that the company [NCR] would pirate his invention, had refused to oblige ...

"Later, after NCR did obtain some machines, Watson proudly demonstrated them to his wife. Although they failed to work on that important occasion, his enthusiasm was undiminished."

​Even though the demonstration failed - - as so many IBM salesman have experienced - - it was a good thing for the C-T-R Company and the future IBM that Watson's enthusiasm was undiminished.

Someday, I may find if this was the foundation for a long-term relationship between George Eastman and Thomas J. Watson Sr. A slice of life story about their relationship through the Society of the Genesee is on this website: [here].