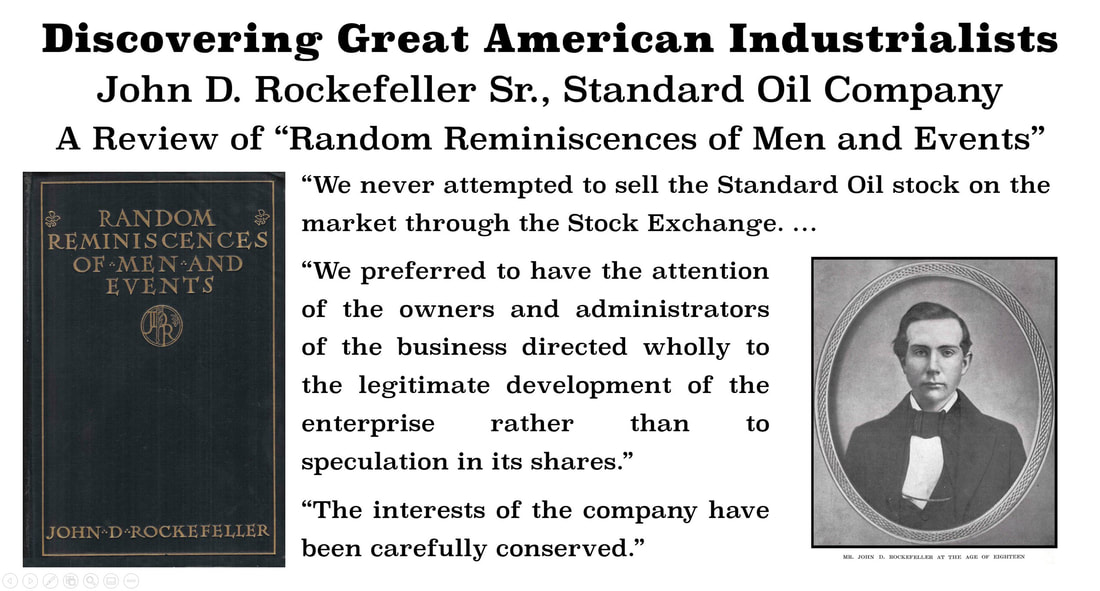 One of the purposes of this book:

"If a tenth of the things that have been said are true, then these dozens of able and faithful men who have been associated with me, many of whom have passed away, must have been guilty of grave faults. For myself, I had decided to say nothing, hoping that after my death the truth would gradually come to the surface and posterity would do strict justice; but while I live and can testify to certain things, it seems fair that I should refer to some points which I hope will help to set forth several much-discussed happenings in a new light.

​"I am convinced that they have not been fully understood."
John D. Rockefeller, Sr., Random Reminiscences of Men and Events
​A Review of "Random Reminiscences of Men and Events" by John D. Rockefeller Sr.
Reviews of the Day: 1908
Mr. Rockefeller's story is well worth the read. This great business genius tells, with wonderful conciseness, the very essence of what he has found to be the making of his success. … A close study ​… will repay every man who wants to make a financial success.
The Caddo Country Tribune, May 6, 1909
The Reminiscences are really most remarkable for their omissions. They eulogized his [Rockefeller's] subordinates and coadjutors, but failed to explain the charges brought by Miss Tarbell, which were principally based upon court records. Avoidance of unpleasant topics is really the most notable feature of the Reminiscences.
Editorial, The Bridgeport Times and Evening Farmer, May 7, 1909
Editor's note: It appears that many of the 1908 Reviews of the Day were just encapsulations or excerpts from the articles of Mr. Rockefeller's that ran in World's Work before publication of the book.
Selected Quotes from "Random Reminiscences"​
"Every right-minded man has a philosophy of life, whether he knows it or not. Hidden away in his mind are certain governing principles, whether he formulates them in words or not, which govern his life."
Miss Ida M. Tarbell's Thoughts and Perceptions about "Reminiscences"
The following was an amazing interview with Ida M. Tarbell about the book. I have included it here as it summarizes my thoughts too. I believe that of all people, Miss Tarbell saw most clearly into the psychology of Mr. John D. Rockefeller Sr.

​She does not pull any punches in this interview.

​She was in true "prize fighter" form.
"Rockefellerism is dead—Mr. Rockefeller writes its epitaph in this very book of his—for don't you see, he insists and insists on charity, philanthropy as cure-all—and what the voices of today and tomorrow are demanding is not charity, but justice.
"Rockefellerism is dead and Mr. Rockefeller himself writes its epitaph. … This book is Mr. Rockefeller's story of his life, with my chapters all left out. The points I tried to make about him. The—as it seemed to me—undesirable methods I tried to describe—the big, dominant, shuddering facts of his work. All these things he has carefully walked around.

"Therefore, since he didn't go into the mud—even to attempt cleaning it up—he has reached his journey's end spotlessly immaculate."
The Two Rockefellers
​"There are two Mr. Rockefellers--and both are constantly before the public.
"Would you like to see them—him—as I do? Listen.

"​There is the Mr. Rockefeller of his own autobiography, for whom I have a real, a great admiration. He is admirable—there is no other word—in his quietly wise discussions of the proper setting out of Japanese quinces and blue firs, of arrangement of geraniums and roses.

"He is admirable in much that he has to say on charity. His demands for efficiency in giving, system, avoidance of wasteful repetition, painstaking investigation—all this is excellent, granted that necessity of making a philanthropic scheme of ethics at all. But of that later.

"However, under the present conditions, his advice is wise and timely.

"And then—there is the other Mr. Rockefeller. There is the man who says to himself and to the world, 'I am the king; no man may call me fool—though some to call me villain.' Utterly and almost as impersonally ruthless as a whirlwind, or a torrent, a conquering Hun, regardless of all save winning for himself.

"No, he's not a Hun—the destructive force in him is too intelligent."
Like Bernard Shaw's Napoleon

"He is more like Bernard Shaw's Napoleon—great because for himself he suspended the ordinary laws of conventionality and morality, while keeping them in operation for other people. He is a mastodon of mental machinery. And would you ask a steam plow for charity? Would you look for scruples in an electric dynamo?

"​Yet, the benevolent Mr. Rockefeller is signing checks for carefully investigated cases with his left hand, while his right is crushing or absorbing some competitor. It is a case of unremitting Dr. Jekyll and Mr. Hyde perhaps. It is the inevitable and supreme irony of our civilization in either instance. That is why I do not really blame Mr. Rockefeller for anything, because he is a necessary product of our civilization at its present stage of development. He ought not to have all his money, but in his institutional giving he is probably transferring it back to the people in the wisest, or rather, most practical way.

"I do not take issue with some of his sermons on giving, as he has written them in his book. Investigation is all very well, but it is fortunate that some of us are willing to drop pennies in the hat without always waiting to see who is behind the hat. Otherwise the streets would be full of corpses who had quietly starved while they were being investigated."
This Author's Thoughts and Perceptions
This autobiography of John D. Rockefeller Sr., was published in series and then in book format in 1908-09. After reading Ida Tarbell's series of articles in McClure's Magazine on "The History of Standard Oil," I was looking forward to reading this book that was not published in response to, but in many ways driven by the public reaction to her articles.

Miss Tarbell is not mentioned.

I am sure that Mr. Rockefeller would not give two hoots about my opinion of him, but as I read this book I was reminded of many executives that I have worked around who operate exactly the way Ida Tarbell writes about Mr. Rockefeller in her series on Standard Oil: they compartmentalize their good works and sympathies. They can be different people in church and with family than they are around their employees, business associates and competitors.

With over 50 years of experience as an employee of business, I have little respect for such individuals as they put on one face for those they want to be loved by and another for those they feel they own or can control. Their standards of conduct are conditional with the relationship, which is probably a too-common trait in most of us that we should address and not condone or excuse.

I know this sounds harsh because Mr. Rockefeller was a true philanthropist with the money he earned—many times at the expense of others. His biography would suggest that he probably assumed these individuals were just not as competent as him in running a business—they should have started a business in another industry. As a basketball player might say today, "He smoked them." As I read this book, I wanted to believe that this chief executive was a good man but a quote written by Merryle Stanley Rukeyser of Tom Watson Sr. came to mind that I think Mr. Rockefeller should have taken to heart: "Watson knew that, unless he went out of his way to show that a big enterprise could be humane and considerate, it would become a psychological symbol of oppression and exploitation." [or read Harvey S. Firestone's philosophy of business and competition from Men and Rubber.]

John D. Rockefeller Sr. felt that he was vilified in the press of his day. Whether right or wrong he failed to understand that his big enterprise, which was one of the first in American history, failed to act humanely and considerately with its competitors and it did become a symbol of oppression and exploitation. If his reputation was important to him, he could have reached out from his corner office to communicate with his detractors—or seen competition as less of a winner-take-all game [such as having a code of conduct like the "Gary Policies" of Elbert H. Gary discussed in the review of his biography: The Life of Elbert H. Gary: The Story of Steel.]. Mr. Rockefeller chose his path of isolation for which he alone is fully accountable—not the press. This short book leaves too many of his actions unexplained to be a very fulfilling read: there are just too many questions left unanswered.

My favorite quote from the book and one that I agree with wholeheartedly is the following:

"A man of business may often most properly consider that he does his share in building up a property which gives steady work for few or many people; and his contribution consists in giving to his employees good working conditions, new opportunities, and a strong stimulus to good work. Just so long as he has the welfare of his employees in his mind and follows his convictions, no one can help honoring such a man.

"It would be the narrowest sort of view to take, and I think the meanest, to consider that good works consist chiefly in the outright giving of money."

Unfortunately, when it came to the four stakeholders in a corporation, Mr. Rockefeller did not see "society" or "community" as one of his investors. Maybe, this was because "society" as a whole was still in its infancy and unable to provide the infrastructures he needed to run his business?
Rockefellerism, as described by Ida Tarbell, reminds me of a few top-level executives I knew at IBM. The new term, though, would be Gerstnerism: chief executive officers driven—at all cost—​by the price of their corporation's stock.

Yet, as shown in the quote at the top of the page, even Rockefeller Sr. refused to be driven by the price of his stock!