A Review of "The Problems of Lasting Peace" 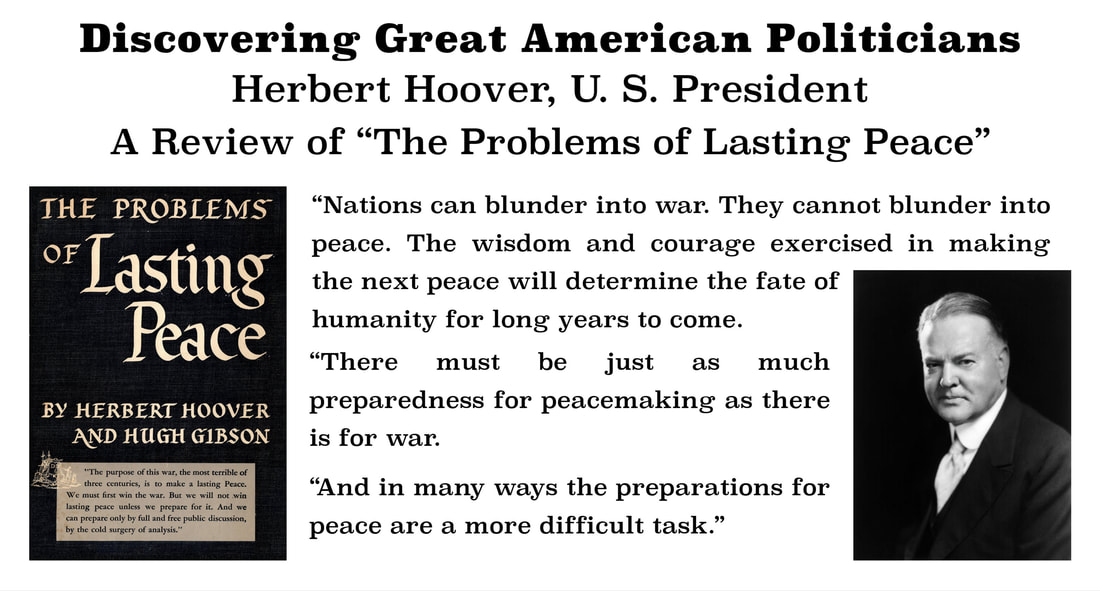 What were the credentials of Herbert Hoover and Hugh Gibson to write about the problems of a lasting peace?
"I have been with him [Herbert Hoover] during the years when a people who once honored and revered him for his achievements in engineering, in administration, in practical philanthropy, in diplomacy, in the feeding of the world, turned upon him with vilification and hatred. And I have seen him come out of the torture of the spirit a gentle, kindly man without malice, without hatred, without vengeance, a Quaker driven by a religious faith that knows no restraints to devote his remaining years to the ideal of peace. … He and Gibson began working together twenty-eight years ago.

"Gibson was in the diplomatic service of the United States during the whole of that period. … The beginning of the last war [World War I] found him in Belgium. … During 1918 and 1919 he was attached to Hoover’s relief work. … Hugh Gibson has been our ambassador to Belgium, Poland, Switzerland, and Brazil. …
​
"These two experienced men have joined their knowledge and wisdom to discuss the case of war and peace."
George E. Sokolsky, "These Days," 1942
​A Review of "The Problems of Lasting Peace" by Herbert Hoover and Hugh Gibson
Reviews of the Day: 1942
“There are many, even now, who wave aside as premature any present consideration of postwar problems. … That wait-and-see attitude has at least two serious flaws. … If the tragic errors of Versailles are not to be repeated, we must think and plan ahead what our course as victors shall be. … For those who would do so intelligently and in the light of long and practical experience, there is no more valuable aid than that contained in the just-published book, The Problems of Lasting Peace.”
​Ralph W. Trueblood, “How We Can Also Win the Peace,” 1942
“The competence of the two collaborators to discuss the matter [of peace] is manifest in their experience. … Two points that they make seem worthy of special note: First, their sober admonition that a policy of vengeance directed against whole peoples is utterly incompatible with real peace; second, their pertinent reminder that if the four freedoms—of speech and worship, from want and fear—are to be realized, a fifth must be added—economic freedom.”
​Editorial, “The Problems of Lasting Peace,” 1942
“Every once in a while, men with governmental experience and background give themselves unreservedly to the preparation of a book done objectively, fairly, and non-partisanly. They perform a service of transcendent value to their fellow-citizens. Such a book—it may prove the most valuable work of our times—has just been published. … It is called The Problems of Lasting Peace.”
​David Lawrence, “The Problems of Lasting Peace,” 1942
Selected Excerpts: Hoover and Gibson Speak
On Nationalism:
"Nationalism can be both a cause of war or a bulwark of peace and progress. The values of nationalism cannot be ignored because of its secondary evils.
"Nationalism can readily expand into dangerous forms—greed in exploitation of the resources and foreign trade of other peoples and in aggression which quickly turns into imperialism."
On Individual Leadership: Statesmanship
"We must not overlook the part which individuals may play. When great crises arise from these forces, they must be dealt with by statesmen. No student of history can ignore the part such men have played in the crises of war and peace.

"When these great pressures are met successfully, it means peace; when there is failure, it means war or the seeds of war. The leaders in times of crisis may be men of ability, character, courage, and vision. Or they may be men of ignorance, incompetence, consuming vanity, egotism, ambition, or corruption. They may be Utopian dreamers. They may be a mixture of these characteristics, good and bad. …
​
"We agree that they have an immense responsibility. But the character of men should not obscure the fact that the fundamental approach to the problems of peace and war lies in recognition of the [seven] great forces in motion."
Study of the Past Approached with Meekness, Suggests Solutions
"The definition of personal liberty varies from time to time and from race to race, for it is modified by the whole racial history of peoples. But there are two essential common denominators.

On Socialism and Communism
"​These systems [Socialism and Communism] were basically more materialistic than the systems of liberty, because their whole thesis was to make a god of economic equality and to lessen intellectual and spiritual liberty. Socialism and Communism guaranteed security without risk, and all human blessings without striving."
On the Theory of Balance of Power
"Its [the balance of power’s] essential base is to maintain a situation where nations modify their aggressiveness by fear of defeat. Fear of defeat always modifies aggressiveness even in the jungle. … Although the balance of power is described as a “just equilibrium,” governments are constantly seeking to secure not so much an even balance as preponderance for their own side [through alliances], and this leads to ultimate conflict. …

"The effect of these combinations is to make war on a much wider front by drawing in many nations not directly part of the controversy.
​
"This was essentially the case in 1914."
On America's Purpose in World War I
"If further proof were needed of our major idealistic purpose, our self-denying ordinances of no annexations of territory and no indemnities amply indicate that there was no imperialism or nationalism behind American purposes. With only a police army, we had no militaristic pressure. We were under no economic pressures of any kind. There was no inherent hate of Germany or Austria. Our declarations that we had no purpose of vengeance or punishment of the enemy peoples further emphasized this.

"In fact, before 1914 the general feeling throughout the nation was perhaps more friendly to Germany than to Britain. There was no fear of invasion of our continent or loss of our independence. We had no internal pressure of any kind for which politicians needed diversion of public mind to foreign affairs and war.
​
"The will to peace ran high among us. So, when we did go to war, it was the most gigantic crusade of all history."
"Huge, specialized factories and millions more of mechanics were required to support the larger [and more complex] armies. …
Other Topics of Consideration
The book also does a deep dive into:

There is so much more “meat” than it is possible to capture here. Unfortunately, the “meat” applies today when examining the world situation in 2021–22.
This Author's Thoughts and Perceptions

Ensuring lasting peace requires an understanding of these seven forces, their interactions and ensuring that the negative forces of each are controlled and the positive forces reinforced.
I read this book for two reasons:
​Starting the book, I was intrigued with discovering why Watson recommended it.

As I read, I wondered if he saw a new path to a peace. Did he see how doomed his 1937–39 peace efforts were because no matter how hard he worked to plant, water, and fertilize the will for peace in so many nations [In 1937 and 1938, he spent 1 out of every 2 days in Europe; in 1937, he visited 13 nations to talk world peace through world trade to these countries’ political and economic leaders as the new President of the International Chamber of Commerce] and no matter how hard he fought for a fair balance of trade between small and large countries, there were five other distinct elements working against him? Would he have done anything differently if this book had been published in 1936 rather than 1942–43? After reading the book, one wonders if any one individual could have done anything differently to achieve a different outcome.
This is an amazing book, but its true power was revealed as I read the 1942–43 reviews and wrote up this personal review. The depth of knowledge and insight overpowers a single read. A college curriculum could be built around its core assumptions and analyses.
When I went back to reread my highlighted passages, I kept shaking my head at the applicability to today’s world:


Currently, more than any time in history, we are going to need statesmen on par with those who led the reconstruction of Europe after World War II.
The Problems of Lasting Peace
​May we find such elevated-in-spirit statesmen again, before we blunder into new wars.
I can now recommend a good book for them to read!