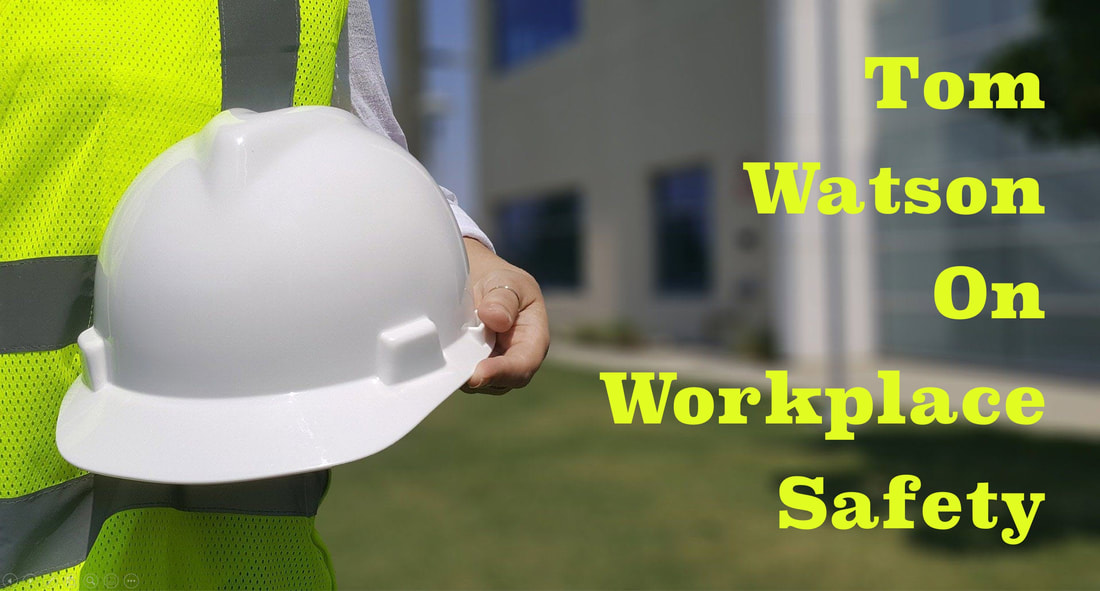 In the 1930's, the safety records of most United States businesses were abysmal. Men, women and children were dying in factories, canneries and mines. Women in New York were working in sweatshops in unsafe conditions. Thomas J. Watson Sr. stated with rigor and conviction, as he always did on topics near to his heart, that the workplace should be safe, but why should a business spend precious money on safety during a major economic depression?

​There were two main reasons: (1) economic for those who needed a business justification and (2) ethical for those who made decisions on a higher plane.

Watson Sr. appeals in this speech to both the pragmatic and the idealistic businessman.​
"The World's Greatest Salesman" Speaking on Workplace Safety
Tom Watson on Workplace Safety
Peter E. Greulich's Perspective
Tom Watson Sr. concluded that to be effective, the executive must centralize direction, focus, and urgency in the corner office. But to be efficient, the executive must decentralize record keeping, responsibility and watchfulness to the foreman and individual worker. This book explores how Tom Watson Sr. balanced the financially tangible and intangible, the roles of pragmatist and idealist, the centralization and decentralization of authority.

Prior to 1837, the common-law relation between employer and employee was no more than the legal relation between strangers. Following that year, however, a vast mass of special legislation developed governing the relations of employer and employee. The adverse character of these laws from the employee’s standpoint is indicated by the doctrines of practices of:
With the application of these harsh rules, various statutes were enacted for the protection of employees. The good effects of this legislation were soon counteracted, however, by the development of the privilege of the employer to request his employees to contract away their rights under the law, thus relieving the employer of all liability for injury.
-     Little Financial Redress

Under this system, it naturally followed that little financial redress was obtainable for injured employees. The fault was in the system of law that forced upon the employee the burden of proof and made compensation possible to only a very small proportion of injured employees. This system led to excessive delays, due to the slow operation of court trials, and proved exceedingly wasteful in time and attorneys’ fees to employer and employee.
​
In view of these shortcomings, the public demanded a more definite and rational system of law with respect to employers’ liability for industrial accidents. This was accomplished through the passage of the Workmen’s Compensation Laws, and within the decade 1910 to 1920, practically every industrial state in the Union enacted such legislation.
​Accident Death Rate Increasing
The efficiency of the worker in factories, on farms, in mines and on railways has increased one-third in the past decade. How do we account for this progress? Much has been due to the systematic study of problems of production and efficiency. These problems have had the benefit of organized and continuous study by management. Systematic efforts have been made to economize on materials and labor and to solve factory problems in general. But in the reduction of accidents we have not made the progress that we should have made. The factor of safety as compared to production is not commensurate. Sufficient stress has not been laid on the fact that greater progress in accident prevention will be brought about mainly through executive consideration, as is the case with the other major functions of management such as financing, engineering, production and marketing.
​Management Policy Needed
Through executive consideration, there should be formulated a specific company policy and plan of organization indicating definite activities and responsibilities for each department in its relation to accident prevention. It should recognize that safety operation has a bearing on good will, sales, production volume and general results. Safety—prevention of accidents and health of employees—should be very definitely a part of every corporation’s business policy. The factors that make for greater safety should be definitely recognized, defined and expressed in a business. Executive policy should indicate likewise the specific channels of responsibility of all concerned and provide for such reports as will give to management a simple means of measuring results and instituting the proper measures of control. Such a program parallels the recognized management approach to problems of finance, production and marketing, and recognizes that accident prevention is, in its final analysis, an integral part of operating procedure.
​The passage of the Workmen’s Compensation Acts, beginning with 1911, introduced a new element of expense into the financial summary. This, in turn, necessitated an extra charge to manufacturing costs. As executives, we are intensely interested in controlling our costs. A great number of corporate accounts have been analyzed and drastically reduced, but inadequate attention has been paid to the possible reduction of compensation insurance costs.
Putting a Safety Program in Place Is Critical
Once the executive’s interest in the economic and social aspects of safety is stimulated, he will be ready to consider organization plans. Safety, however, does not differ from any other executive policy. But unless it receives the sincere and wholehearted cooperation of management and labor, it will not progress. For that reason, the foundation of the safety program should be laid with the utmost care. Responsibility for the safety organization should be centered in the executive province, but the same supervision should be exercised in the execution of its regulations as in the case of the production schedule. A general committee type of organization should be favored so that equal representation might be had for executive, manager and employee.
​
With this all-embracing plan of organization, the employee’s interest automatically becomes the interest of his employers.
Decentralize: Foreman Familiar with Needs
That, however, is not the fault of our fact-finding institutions; it is due entirely to the lack of united and uniform assumption of responsibility on the part of industrial executives. When a rough estimate, based upon studies of the National Industrial Conference Board, discloses that there are between ten million and eleven million injuries in the manufacturing industries annually, the necessity for executive action in accident prevention is apparent. Every executive in the United States, whether he directs a large or small establishment, should see to it that accuracy and promptness govern the compilation of accident and inspection reports. Then, with these records as an index to the productive efficiency and accident control in the plant, he can easily compare the position of his company with that of other organizations with reference to safety progress.
​Only by a full realization of this responsibility on the part of each individual will safety be instituted and maintained as a specific executive policy, which will contribute immeasurably to a broader and sounder industrial program and add to the happiness—and improve the welfare of—the worker.
Return to The World's Greatest Salesman Information Home Page