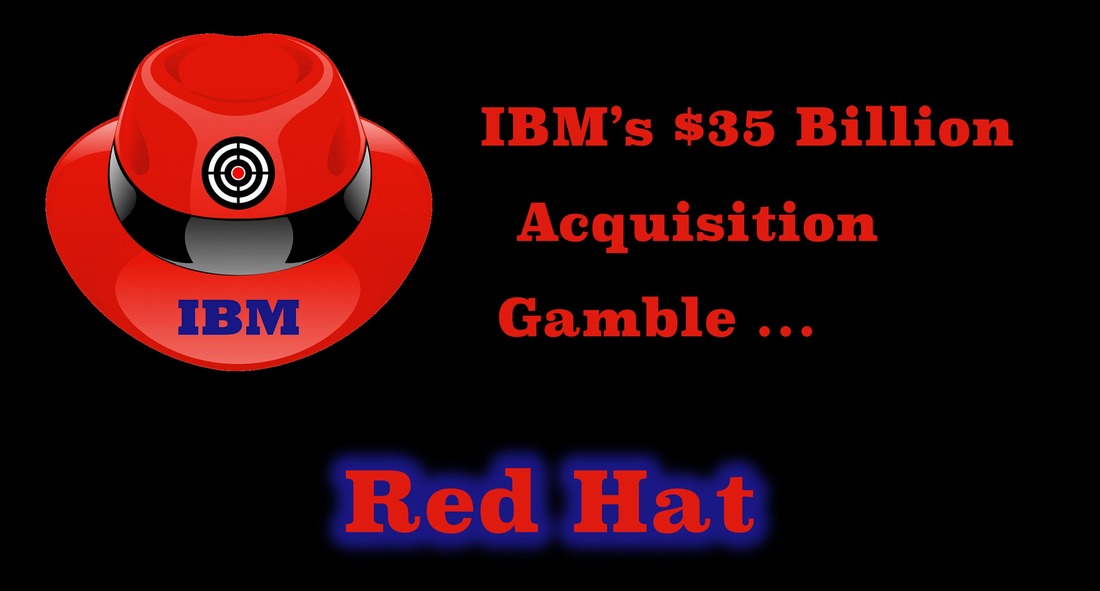 ​Numbers that are in the billions and trillions seem all too unreal to the human mind. So, let’s add some business perspective to IBM’s $35.1 billion acquisition by breaking it down into digestible numbers and historical risks.​
Some Business Thoughts on IBM's Red Hat Acquisition
This Acquisition’s Biggest Business Risk Is IBM’s Greatest Weakness
The following statements from Red Hat’s pre-acquisition 2018 Annual Report expose this acquisition’s human-risk factors:
​ IBM last published its employee satisfaction numbers in its 2010 Corporate Responsibility Summary. In 2011, IBM asked their employees if they would recommend IBM as a place to work. The industry average was a positive 7 out of 10 with the industry's best reaching 9 out of 10—89%. IBM’s worldwide response was below average with only 58% offering to recommend the company. Within IBM North America it was a miserable 50%—only 1 out of 2 would recommend the company as a place to work.

​It is understandable why IBM’s Human Relations organization no longer publishes its employee satisfaction numbers. Instead, it publishes what it does for its employees, not if what it is doing is actually effective. This is the equivalent of appraising an employee on hard work rather than effectiveness: kudos, but it misses the point.
​
Despite the nice picture that IBM’s Chief Human Resource Officer paints of her tenure for Forbes, the corporation’s human relation practices have been a two-decade-long drag on sales and profit productivity and – as a result – earnings per share.

Here is IBM's twenty-first-century sales productivity as an example:

IBM’s Achilles’ heel is its human relations. If Gallup did an in-depth study of the corporation, it would find that its employees are not engaged; Deloitte would quickly discover that they aren’t passionate; and Tom Watson Sr., if he were alive today, would make it a priority—as he did in 1914—to improve employee enthusiasm. Why is this important?
​
Red Hat’s employee sales productivity at the end of 2017 was 20% higher than IBM’s, and its profit productivity was 34% higher (IBM’s profit productivity has been dropping significantly since 2013 and hit 21st Century lows in both 2017 and 2020). Red Hat’s employees, it would appear, were engaged, passionate and enthusiastic before the acquisition. Are they still?

The answer is noted in the chart above:


It seems that Big Blue is already impacting Big Red's productivity numbers. This should be an embarrassment since IBM paid approximately $3,000,000 per person ($35.1 billion for 11,870 employees as of February 28, 2018). This is an important number to remember as each Red Hat employee leaves, is resourced, or is picked off by the competition because Red Hat’s value to IBM is its people and their "innovation, creativity and collaboration."
​
The value of this acquisition deteriorates with each employee lost, not to mention the merger's loss of Red Hat's dynamic Chief Executive Officer: James Whitehurst.
IBM’s Acquisition and Divestiture Strategy Is about Wall Street-First
Were they afraid no one would buy into the offering? [See Footnote]

Even decisions that are measured in billions should be subject to an economic justification. If this acquisition doesn’t meet expectations, it is reasonable to expect IBM’s Chief Executive Officer to spin off the company, its products, and its customers like the company has other acquisitions and whole divisions whose products were of strategic value to the corporation's customers but not necessarily to IBM's corner office.

IBM’s decades of acquisitions and divestitures demonstrate that the chief executives have prioritized their earnings-per-share strategy over their own customers’ strategic investments in the company’s products. It has never been a good, long-term business strategy to alienate customers.
​
These are bad, short-term, stock-price manipulations that have been going on for too long.

One does get the feeling that this acquisition was a Hail Mary acquisition.
IBM Has Little Proven Expertise with Acquisitions of this Visibility
This begs the question as to who at IBM has the experience to successfully integrate the talents of such a visible acquisition. James Whitehurst would have been a logical choice, but he is out of the picture. IBM, as a corporation of 400,000 (reduced to 300,000 in 2021) with all its arcane polices and human resource problems, can easily overwhelm a corporation of 12,000 causing drops in sales and profit productivity. If growth numbers disappoint, or if the company attempts to obfuscate these numbers (as it has its strategic imperative numbers), we should hope that the "free" press and "competent" analysts will call its bluff on an acquisition of this size. This could force a goodwill impairment of significant magnitude.

With the wrong executive leadership, this acquisition could easily become IBM’s equivalent of HP’s Autonomy or Microsoft’s Nokia, as IBM's financial organization doesn't understand the difference between talking about a vision and providing the necessary funds to train people and improve processes to deliver profitable, competitive products to market.
​
This twenty-first-century corporation is led by jettison-now management, not managed by turn-around leadership. It will be interesting to see if Arvind Krishna—without James Whitehurst—can or has the will to rein in the financial organization.
Red Hat and the Continuing Rise of Not-So-Good Goodwill at IBM
IBM is carrying on its books 71% of all its acquisition dollars since 2001 as an intangible asset called goodwill. Its acquisitions have not been in tangible assets such as manufacturing facilities or office buildings but in that “intangible” gray matter located between its acquired assets’ two ears. This human asset can lose his or her value slowly as productivity melts away in disillusionment, or it can be lost quickly to a competitor if the new work environment proves too toxic to bear. With bad management, investors should remember that human – intangible – assets are subject to the saying, "Here today, gone tomorrow"—physically, mentally or emotionally.​

The charts below have been updated with information from IBM's 2020 and 2021 Annual Reports:

IBM justifies this goodwill every year – as it has since 2006 – with its normal cut-and-paste into its annual report: “The primary drivers that generate goodwill are the value of synergies between … the company and the acquired assembled workforce.” Unfortunately, the synergies of its previous 184 workforce acquisitions (207 acquisitions as of the end of 2021) have failed to materialize, as IBM’s sales and profit productivity continues to fall. Total shareholder equity less goodwill reflects the overriding importance of these acquired human assets—the human synergies upon which this goodwill is based.
​
This Red Hat acquisition might finally cause a few of the larger, more powerful shareholders to start asking questions as shareholder equity less goodwill has fallen significantly further into the red, and shareholder equity less all intangibles reached scary amounts and a significant percentage of total assets.

Shareholders may soon awaken to the realization that the only way to maximize shareholder value is to maximize stakeholder value through an equitable distribution of profits between shareholders, customers, employees and society—the corporation's four investors. As the three charts above show, IBM's human assets - synergies of acquired workforces - have reached half of total assets.

Just as a piece of machinery needs maintenance or it breaks down, the human being needs investments to maximize its efficiency in the workplace.
This Author's Thoughts and Perceptions
​After some study, it is apparent why Red Hat’s shareholders approved this acquisition. They cashed out. It is hard, though, to see how this acquisition is proving to be of any benefit to IBM’s long-term shareholders other than in short-term marketing hype. It is not the type of acquisition that will shake the corporation out of its two-decade-long, shareholder-return slump. This is more of the same: a two-decade-long, wrong-headed, dual strategy of investing in paper and acquisitions instead of making the corporation's people more productive, its processes more effective, and producing products of higher value through long-term, customer-focused, internal research investments.

IBM needs to invest in game-changing, bet-the-business initiatives within its industry or march in place, marshal its resources and put its top distinguished engineers to work calculating where to make profitable micro-investments until the next market shift happens – and then lead. Historically, IBM has used such strategies to take market share from its competitors during down economies. (see IBM’s Crises, Recoveries and Lessons Learned)

With this acquisition, IBM is following the herd into a territory in which it has little expertise: low-priced, highly-commoditized, and extremely competitive markets. It has rarely been successful in being the short-term, low-price, producer of anything. Its success has always been in selling the highest-priced but long-term, lowest-cost, solution that sticks—such as the System/360 (mainframe) or AS/400. This acquisition doesn’t fit the later model and any transformation that takes IBM in the direction of the former, is a mistake of the greatest magnitude.

As always, a humble opinion – derived from on-going research – that is expressed with great passion and concern for the corporation, its people and my friends who depend on the company for their pensions, dividends and paychecks.

Cheers,
​
- Peter E.
Footnote: Watson Jr. wrote in his book Father, Son and Company about the increased competition as he was making the shift from tabulating machines to computers in the early '60s. It appears the market saw this competition too. He would write in his book that in the autumn of 1965, after announcing the System/360 in April of 1964, everything looked "black, black, black" as the company clung to "its production schedule" but "morale was going down." The company came within weeks of needing to borrow money to meet its payroll obligations. He "surprised" the market with a new stock offering to cover the costs of building the new hardware platform. The shareholders kept their faith in his leadership and the company's ability to deliver. The new stock offering was fully subscribed.
Return to IBM's 21st Century Corporate Practices Home Page