A Review of "Famous Leaders of Industry: Second Series" 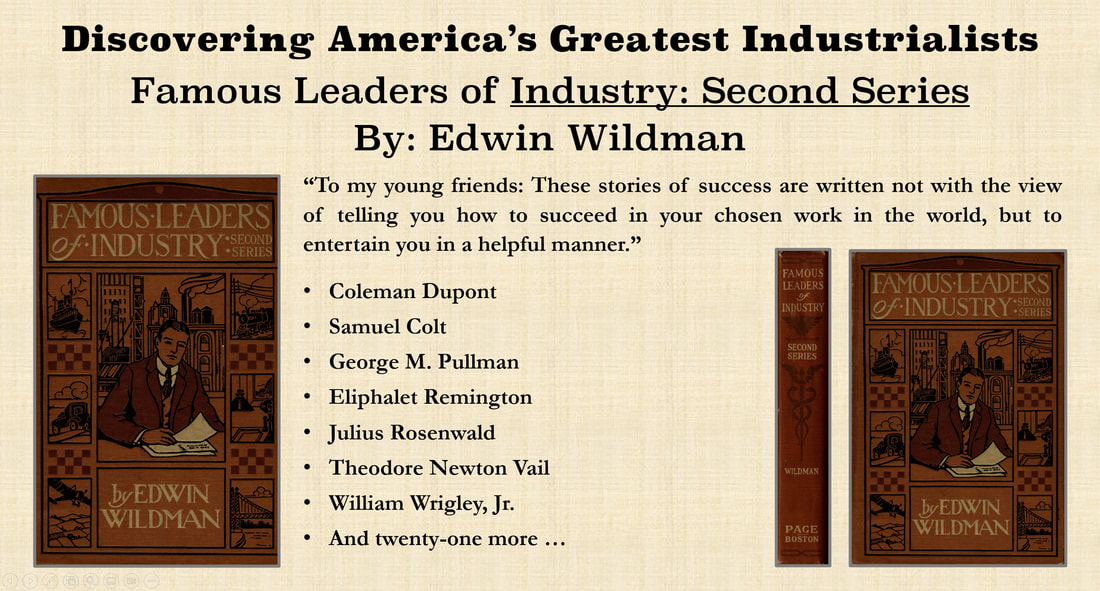 A Review of "Famous Leaders of Industry: Second Series"
Reviews of the Day: 1921–22

“Famous Leaders of Industry is the kind of book that should be in every school library. Through short and interesting biographies of industrial leaders it tells the story of modern industrial progress. In no more attractive way could this history, which has been sadly neglected in our schools, be studied.”

“This book … is intended for boy readers. … Some might hold that they were too unequivocal, that some of the heroes might be disqualified by nice distinctions. … If some of them are monopolists, then they are greater heroes. This justifies more than anything the choice of men for these studies.”

The Columbia, South Carolina State, “Books of the Day,” February 2, 1922
Edwin Wildman on "Famous Leaders of Industry: Second Series"
On Julius Rosenwald, Sears, Roebuck & Company
“A few years ago when Julius Rosenwald celebrated his fiftieth birthday, he distributed about three-quarters of a million dollars, for he thought it ‘a crime for a man to pile up money after he has enough for himself and family.’
​
“The money went to universities, institutes and rural schools for Negroes, Jewish charities, Y. M. C. A’s, and the like.”
On Theodore N. Vail, American Telephone and Telegraph (AT&T)
“One secret to my [Vail’s] success was to ‘never being unwilling—when young, to do another man’s work, and then—when older, never doing anything somebody else could do better for me.’ ”
On Bartlett Arkell, Beech-Nut Company
“I [Bartlett Arkell] have often wondered if a man could make a million dollars honestly. ...

​"If I can't—I don't want to make it.”
This Author’s Thoughts on "Famous Leaders of Industry: Second Series"
There were times when I discovered quotes or insights that I had not seen anywhere else. Such as that which is highlighted above about Andrew Carnegie training and employing women in the railroad industry. Of course, no details, no footnotes, and no references are provided to guide a researcher for more information to expand on the topic.
Another example is Edwin Wildman’s coverage of George Washington Goethals. He writes: “No matter what was given him to do, his superiors could always bank upon its being done—and done right. So, as he was faithful in little things, he was entrusted with big things.” The author offers little to support this statement. It must be taken on faith by the reader—the target reader being an adolescent. The author fails to lay out the specifics, build a case, and then summarize with an observation.

It would be inappropriate to use any of these materials in any research effort unless the information is collaborated elsewhere. Most of the material appears to have been drawn from previously written articles by other authors and not from new interviews or original research. For the most part, the information needs verification and elaboration.

Using this information would be similar to using Wikipedia to establish a base to work from, but, as with Wikipedia, a researcher shouldn’t accept the information as credible without further research. On the other side, there is information in here that would be hard to find consolidated in one place such as the number of these individuals who lost their fathers in early life and supported their families in their place. So, enjoy the brief insights provided in this book.

If more detailed information on individual industrialists is available on this website, I have provided links in the following list of leaders covered in this book.