DISCERNING READERS
"The Golden Rule was a vitalizing part of his make-up . . . profits for the customers, good pay for his workers, and reasonable returns for stockholders." 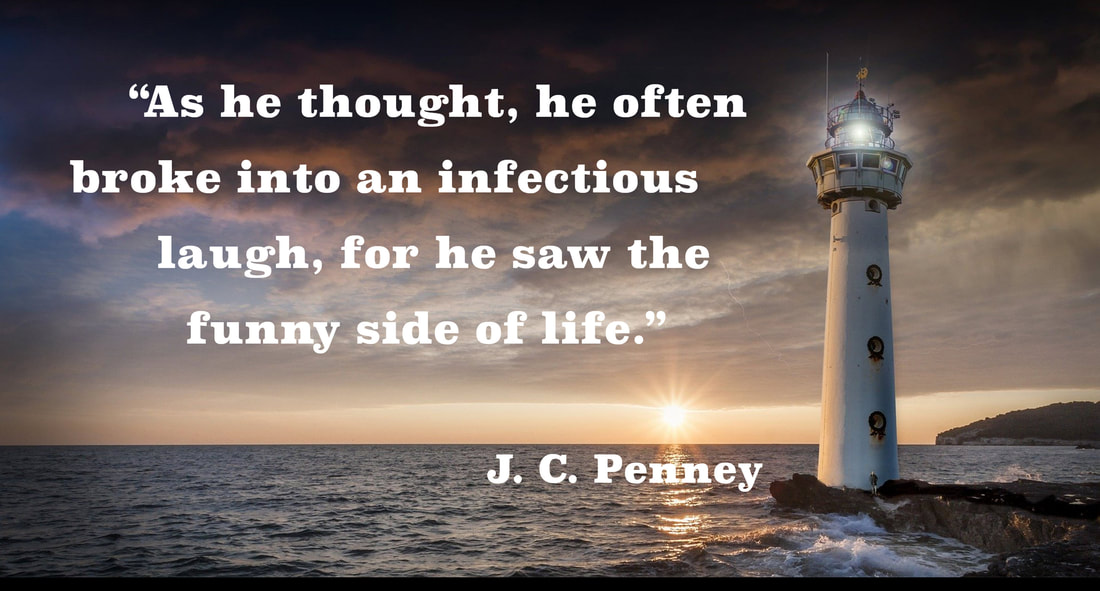 Thomas J. Watson Sr. died in June of 1956. In June of 1957, the Thomas Watson Memorial Homestead was dedicated. The principal speaker was Attorney General Herbert Brownell Jr. The dedication speech was delivered by Mr. James Cash Penney, probably better known today as J. C. Penney—founder of J. C. Penney.
In front of more than 2,000 people, the Attorney General praised the Watson Memorial Homestead project, financed by IBM's late president and chairman of the board, as an instrument for instilling tolerance and discipline in the youth of today. He further explained that the young who attended the Homestead learned a vital lesson: That the right to believe, the right to worship, the right to voice one's own opinion are integral and indispensable parts of our free life. Governor Averell Harriman, not present, wrote that the Homestead project was "a great boon to the young people of all races and creeds."

​Mr. J. C. Penney delivered the following dedication speech in Coopers Plains, New York, June 30, 1957. This is his speech in its entirety. Paragraph headings were added by Peter E. Greulich and are his sole responsibility.
J. C Penney's Tom Watson Memorial Homestead Eulogy
Editor's Note: This is the address given by Mr. J. C. Penney on the occasion of the dedication of the Thomas Watson Memorial Foundation in Coopers Plains, New York, June 30, 1957.
Tom Watson's Business Reached Way Beyond his Corporation
I therefore consider it a high privilege to share in the practical fulfillment of one of his dreams in the dedication of this memorial building. He was my friend, a man whose aims were in accord with my own. We were in complete agreement on the Christian principles which under-girded our business ideals. Our association in the laymen’s movement bound us together in common aims. He proved in his work what I have always claimed: That the application of the Golden Rule in all areas of life is good sound business.

Here was a man who began working for six dollars a week. That he worked hard, efficiently and faithfully is shown by his rapid rise to an executive position. When he became president of the IBM Company, there were less than four hundred employees. Today there are 59,000 people working for the company. An investment of three thousand dollars in the company in the year he became its leader could now be valued at over two million dollars!

No one will dispute the fact that Thomas Watson’s efforts and initiative were some of the main factors in this phenomenal growth. IBM holds a leading place in the world of industry and business because of this man’s dedicated integrity and courageous thinking.
Tom Watson Thought Beyond Stocks, Statistics and Machines
However, his original mind ranged far beyond stocks and statistics. His interests spread beyond machines to music, beyond calculating instruments to culture, beyond International Business Machines to international peace and brotherhood.

The Golden Rule was a vitalizing part of his make-up, and he naturally considered his business in the light of profits for the customers, good pay for his workers, and reasonable returns for stockholders. To Tom Watson, men were the most important factor. His initiative brought into being an outstanding group of engineers and research men which has probably fashioned more unbelievably clever machines than have been produced in any other organization.

Yet he never became like the thing he made, for he constantly stressed thinking as the mainspring of effectiveness. He realized that only the thoughtless could fail to recognize divine purpose, direction and planning for man. He saw that man’s inventive genius was merely the result of using innate abilities to discover the wisdom of the creator.
Tom Watson Was a Man of Balance and Laughter
Yet I must quickly explain that though Tom Watson was a serious thinker he was no long-faced intellectual. As he thought, he often broke into an infectious laugh, for he saw the funny side of life. Many here today will not feel sorrow as they think of him but, on the contrary, they will recall with a smile the times when his jokes relieved tension, or made a gloomy face relax with a happy laugh.

The world at large will class him as a mighty business man tied up with ticker tape in a framework of business machines. I knew him as quite a different man; a deeply sympathetic friend of all men, who knew the importance of what I would call “the spiritual strata of life.” It has been said that “each person’s thought pattern builds the strength or weakness of his own selection. The soul builds what he truly thinks.”

The man whose memory we honor today was one whose thinking built up a sturdy Christian character with an integrity which all remember. The vigor of his lucid mind encouraged his associates and inspired the genius of his assistants.

Tom Watson once said: ‘‘The cornerstone of all values is the man himself whatever his job.” He always urged the importance of what he called “investment in human assets.” This was never a matter of a patronizing approach from the top brass to the rank and file. Any benefits the company gave to employees he asserted, were investments, but they were earned by the workers.

I believe I know why his mind worked that way. He recognized the hidden qualities in every man. No one was ever, in his estimation, just an impersonal, insignificant cog in a machine.
Tom Watson Considered Every Man his Brother
Have you ever been able to resist becoming a “sidewalk superintendent” when a group of men is at work in the street, particularly in a large hole?

A young fellow taking a breather during his lunch hour joined a crowd by the barriers surrounding a deep excavation. He leaned over and watched with lazy interest the workers below who were digging frantically in one corner. The conversation around him soon made it clear that there had been a cave-in, and a worker was trapped beneath the fall of earth. Suddenly, one of the diggers looked up, recognized the young man, and shouted: “Say, Bob! It’s your brother Bill we’re digging out!”

As you can imagine, Bob was immediately transformed from a nonchalant watcher to an eager volunteer digger. It was his brother in mortal danger and that made all the difference!
​
Do you see why my friend Tom Watson thought and acted as he did? He recognized in all men, his brothers.

That simple, yet profound, thought governed his life and work. This was the foundation for his fair dealing with customers, employees and associates. It was the reason for his never failing to remember “the folks back home.” Hence it is fitting that this memorial foundation should be in a place so closely associated with him.

Quite naturally he was a member of the Laymen’s Movement for a Christian World. For him this was a normal pattern of living. It stood the test. It was one of the priorities. If he ever marked his Bible I can almost guarantee that alongside one verse would be the notation: “tried, and proved.” The verse is: “Seek first the kingdom of God and all these things shall be added unto you.”
Tom Watson Served God and Neighbor
Tom Watson considered anything worthwhile which served his God and his neighbor. Never did he doubt the answer to the old question: “Who is my neighbor?” He instinctively saw him, not just as the man next door, but as “every man,” those “back home,” business associates, employees in office and factory, customers, stockholders, the nation’s and the world’s leaders - in fact, every man he touched in one way or another

Everything he did and said proved that his devotion to God was not just a veneer. It was no mere formality which made him an earnest church member, and induced him to accept multiple responsibilities in important national committees of the church. He was sincerely and consistently accepting the principle of loving God, and serving him in practical living.

His alabaster box of precious ointment, offered to his master, was his determination to THINK, not of himself, but of others. In this he served God. The great extension of his business, the approbation of his associates, the praise of the world, and the distinctions he was awarded, were all by-product rewards.

Today we do our best to honor a truly great man. Let me humbly say of him, as Jesus said concerning another who offered a token of devotion, “This that he has done shall be spoken of for a memorial of him.”
J. C. (James Cash) Penney
Return to the Thomas J. Watson Sr. History Home Page
If you have information, letters, communications, or personal experiences to share about Tom Watson Sr. contact us.