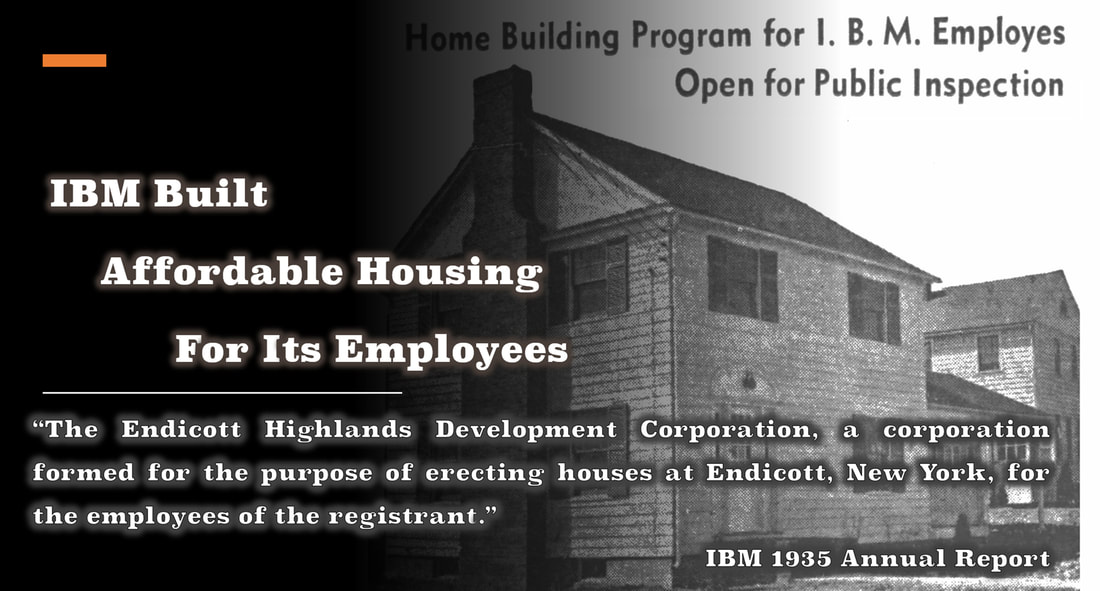 Have American Corporations built homes for their employees?
​
Yes. One example among many was IBM—International Business Machines—which, under the direction of Thomas J. Watson Sr., built homes for its employees through the Endicott Highlands Development Corporation from 1935–36 through 1947–49. The corporation was especially active after World War II in providing homes—at cost—for the corporation’s World War II veterans in the Endicott area. [See Footnote: There were other 20th Century home-building corporations]

Were the homes that IBM built affordable?

Yes. In 1937, the average yearly pay for an hourly (non-salaried) IBM Endicott Employee was $1,913 or $160 a month to pay a $33 monthly installment on a $3,600 mortgage. Putting this into 2021 dollars, this would be a yearly salary of $38,000 or $3200 per month to pay a $650 monthly installment on a $71,000 mortgage (2021 figures are using the U.S. government’s CPI inflation calculator).
IBM Built Affordable Housing for its Employees
George F. Johnson Issues a Challenge to Tom Watson
In May 1934, George F. Johnson, chief executive of Endicott Johnson Company, issued a challenge to an exceptionally good friend and a fellow tri-cities’ chief executive: Thomas J. Watson, the president and traditional founder of IBM. George F. challenged his friend, Tom, to start “building homes” in the community for IBM employees.

The setting was a First Methodist Episcopal Church membership drive. The Oxford Class of the Endicott-Johnson “Blues” challenged the Oxford Class of IBM “Reds” to increase membership with the highlight of each drive being an attendance contest at the final keynote address by the respective leader of each business organization—George F. Johnson speaking on behalf of the “Blues,” and Thomas J. Watson Sr. speaking on behalf of the “Reds.”

On April 29, 1934, Tom Watson gave his keynote address at the First Methodist Episcopal Church. He looked into the future and stated that “We stand on the threshold of shorter hours and higher wages for everybody and I don’t know of any industrialist who has been progressive in the past who is not looking forward to those conditions.” An impressive start with a positive message; but the following week, George F. Johnson in his keynote stated:

“My thought this morning is to see what we can do for our little town; first of all, let us build homes. … I wish he [Tom Watson] would build a couple hundred homes here. We need at least 500. … In this community we need many things to keep going. The most important is homes. … We want homes, Frank … homes! [Mr. Johnson was addressing the IBM Endicott Resident Manager, Mr. Frank Venner.] The Endicott Johnson Company is going to continue to build homes.”

George F. had thrown down the gauntlet, …

… and Tom Watson accepted his friend’s challenge.
The Formation of IBM’s Endicott-Highland Corporation
Watson arrived in Endicott a few days later to discuss the project and see the land.
The Binghamton Press described the homes as a Colonial style, frame construction with full basements, attached garages, and six-rooms—kitchen, living, and dining rooms on the first floor, three bedrooms and a bathroom on the second floor. These were to be sold at cost by the corporation to its employees. Six of the ten homes had already been sold, and there was a queue of 134 applications.
If the chief executives saw this as a “competition,” it was a friendly competition supporting a wonderful cause—home ownership.

As can be seen in the 1937 picture below, IBM’s Endicott Highlands Community was taking shape.

A view down Green Street of IBM’s Endicott-Highlands Community in October 1937.
Affordable Housing Construction Timeline Highlights
[See also Detailed Construction Timeline]
IBM’s resident manager summed up the twelve-year, home-building effort by elaborating on the 226 homes built in the area: 151 homes were built by IBM through its subsidiary corporation, the Endicott Highlands Corporation. These occupied about half the tracts of land. In addition, 75 homes were built privately by individuals who bought lots directly from the development corporation.
This Author’s Thoughts and Perceptions​​​
​George F. just needed to get Tom Watson’s attention …

… and the contest was on.

Tom loved a challenge.
Footnote: Although IBM and Endicott Johnson Company are premier examples of two corporations that cared about better housing for their employees, they are not unique in the history of the United States of America. Several early twentieth-century corporations preceded them and some even outperformed them: Many a great, early 20th Century American industrialist invested in the homelife of their employees. ​There are others.
Return to the Thomas J. Watson Sr. History Home Page