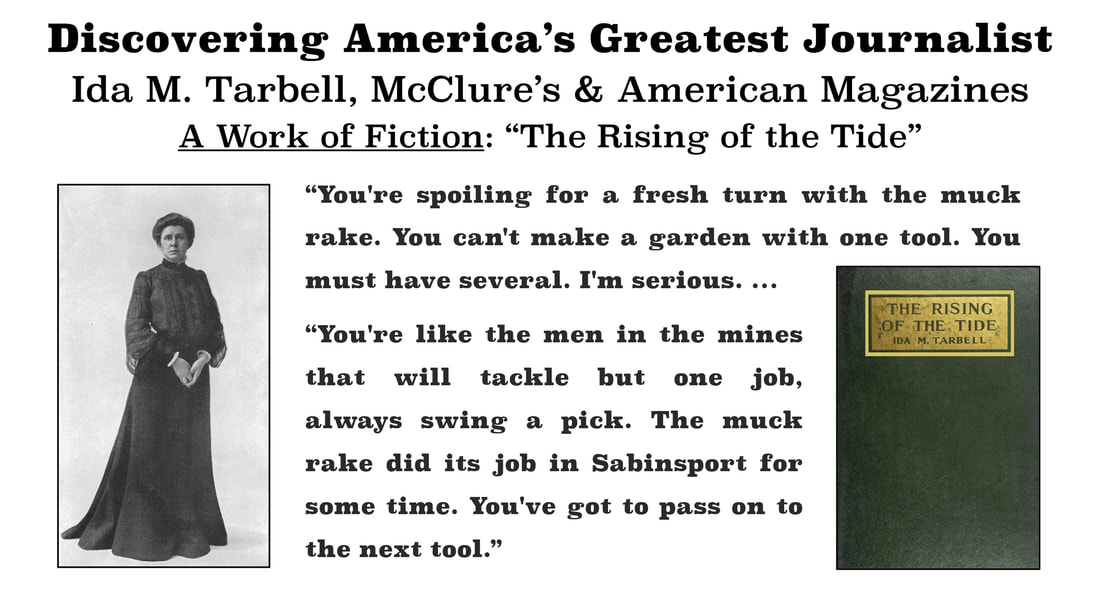 ​Ida Tarbell is best known for her works of non-fiction and deep research which even today reveals the character and drive behind some great individuals of American and French history. It is an eclectic list ranging from a President of the United States to his Secretary of War, from industrialists both hated and praised, to American and French figures of power and control: Abraham Lincoln and Charles A. Dana, John D. Rockefeller Sr. and Elbert H. Gary and Owen D. Young, and Napoleon and Madame Roland. She also wrote articles on American business practices in general and great women of early American history.

It seems to be little known, though, that she also tried her hand at fiction: a story of the town of Sabinsport and the effect of World War I on its citizens and culture.

It is a wonderful story.
The Rising of the Tide: The Story of Sabinsport
In the opening pages of this book, Dick is telling his friend Ralph, publisher of The Argus, [the local Sabinsport newspaper] how he has to change his approach in his editorials if he expects change to take place in the town of Sabinsport.

"You're spoiling for a fresh turn with the muck rake. You can't make a garden with one tool. You must have several. I'm serious. You're like the men in the mines that will tackle but one job, always swing a pick. The muck rake did its job in Sabinsport for some time. You've got to pass on to the next tool."
​
This was absolutely Ida M. Tarbell's consistent message to her journalist friends from 1919 (the time of the writing of this book) until the end of her life: they needed more than one tool, the muck rake - the tool of shame - if they were going to bring positive change to America.

In The Rising of the Tide, Ida M. Tarbell tries her hand with her new tool: a fiction novel about the changes that occur as Dick, Ralph and their town of Sabinsport come to grips with the necessity of sacrifice to defend freedom and democracy with the United States' entrance into World War I.
Humanity Needs Friendships and Time to Accept Change
The moment of truth for Ralph comes when he asks his best friend, Dick, to truly tell him what is wrong with him. Why he feels so utterly impotent to make the world change.

​As she writes, "Dick did not spare him."
​
"Egotism is the matter with you, Ralph. ... You've wanted Germany to be right because she had been right in certain things you had at heart. ... It has been your opinion, your propaganda, your desires, that you clung to at a time when the very core of things just and decent in the world was attacked. ... How, in heaven's name, can you suppose your conclusions are the final and supreme ones? ...

"You took the easy, intellectual way of the pacifist - war is wrong, therefore I won't try to understand this war. ... When you did your levelest to stir the wire mill to strike two years ago, what was that but war - gaining a point by force? What but war are those campaigns of yours in the Argus? There's many a man would prefer to face a machine gun to facing you when you've loaded the Argus [the Sabinsport newspaper] against them. ...

"So far you have been unwilling to admit that any other form of evil existed [other than in the struggle of labor against capital] on earth and the only way you were willing to fight this, was your own way. You had selected your enemy, you had laid out your weapons. You would not consent to see other enemies or other weapons."

Ida evolves Ralph as he starts to understand his view of Germany might be wrong. She describes him achieving what she calls the "most difficult of human tasks" -- laying aside of human emotion to see the facts before him.
​
"He had achieved one of the most difficult of human tasks - a completely impersonal, non-partisan attitude toward events which thrilled with human emotion and which involved all of the deepest of human wants and human dreams. He meant to see the thing right, and whatever labor or pain was necessary to see it right - he was giving.

​Gradually it unrolled itself before his mind - the most terrific of human dramas."
As the Individual Goes, so Goes the Community
Ida also writes of Sabinsport as if it were a living breathing human being. She takes the town with all its ethnically diverse cultures and evolves the town until it arrives at this point - the point of being American.
​
"The Great War ... stretched her [Sabinsport's] mind to take in facts never before known to her, softening her heart to understand and sympathize where she had been ignorant and hard. It was time that Sabinsport grew together, for the day was close at hand when she was to be called upon to become more than a spectator in the great tragedy.

"She watched with somber face but steady eye as day after day the proofs piled up that she could no longer do business with Germany. ... Sabinsport needed to feel that out of this sacrifice there should come some new conception of life, some greater guarantee of more joy and freedom to more people, some pledge that in future times there was hope of less sorrow, less hunger, less pain everywhere on the earth. ...

​"This, she finally saw, was what it was all about; and in groping toward this realization there came to Sabinsport something that was akin to a new faith, and with this she was for the first time fully and unalterably reconciled to the Great War. ... It was no longer grim determination, no longer hatred of an enemy that she despised, that held her to the undertaking.

​"It was a large and luminous faith that out of it all a long step had been taken toward realizing that new world to which, since the beginning of time, men have lifted their eyes."
The Irony of the Men and Women in Sabinsport
​This book was written at the height of the suffragette movement. Ida Tarbell was constantly defending her views when it involved the suffragettes. She believed in their goals, but not their means. She believed that the leadership of the suffragette movement turned what should have been a forward movement for the combined male-and-female democratic masses into a divisive war of the sexes: it may have been tactically smart, but it was strategically wrong headed [Ida M. Tarbell Overview].

Within the novel we find Dick, who wants to fight in the war but cannot because of a physical ailment, and Ralph who can fight but does not believe in war of any kind. They are placed in contrast to their eventual soulmates. In the women, we find strong individuals who disregard their own safety and actively commit to alleviate the suffering in Serbia, Belgium and at home. Needless to say, the supposedly stronger sex - two men who either aren't strong enough or committed enough - learn a few things from the women they love.

It was fun reading a work with such forward thoughts on the relationship of man to woman more than a hundred years ago.

Maybe things aren't so different today?
​And Yes, Multiple Love Stories
And for those that would not expect it from Ida Tarbell - Miss Non-Fiction - there are multiple love stories in this novel. They should bring tears to your eyes. The book ends on a hopeful and uplifting note even after all the sacrifices the men and women of Sabinsport make in the singular hope that this will be "the war to end all wars."