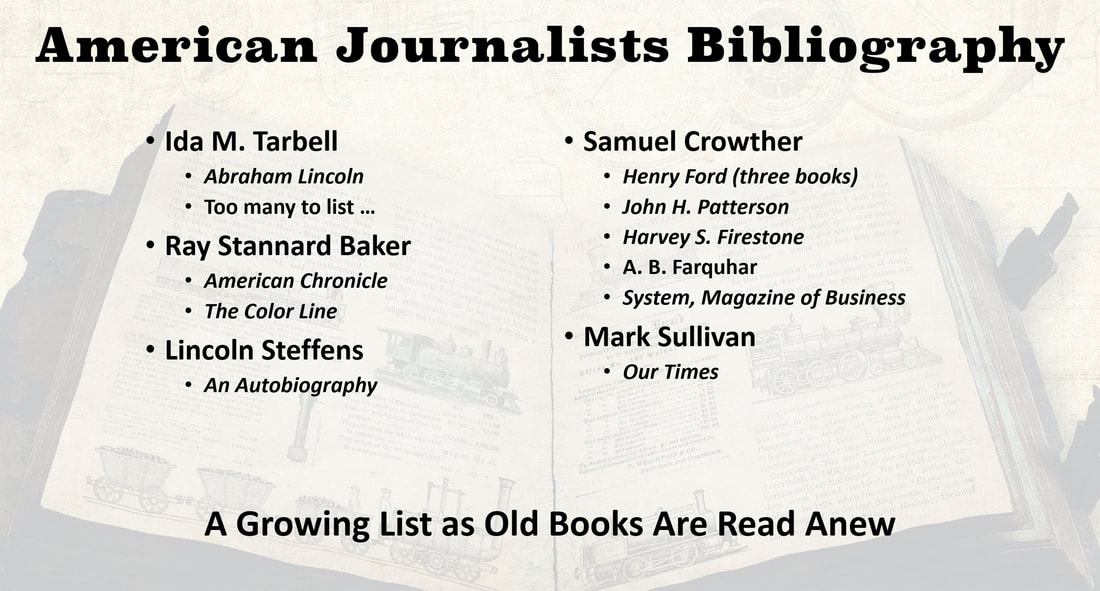 ​These writers, researchers and journalists would never work for Yahoo News—regurgitators of the research of others. Their integrity and work ethic demanded originality of thought and the complete dissection of facts down to fundamental truths. These writers believed that their work should be held to a standard to which the “wise and honest” can always return—without compromise. [Footnote #1]

This is not to say they were perfect, but they put their heart and soul into their work and their intellect shows in their results.

​Theirs was an exceptional style of journalism.

​This is why I highlight them here.
Peter E. Greulich, Updated: July 1, 2022
Journalist / Muckraker Bibliography
The McClure's Magazine Muckrakers / Authors
Although, Ida Tarbell did not care for the title of "muckraker" that is how most American's know her. These three were peers, fellow employees of McClure’s Magazine, and joint owners in The American. They have all written autobiographies as well as numerous books and articles—many of which are reviewed on this site.
I believe I have read and now reviewed all her works. An amazing woman who, although she didn’t stand alone, stood higher, straighter, and stronger in her convictions than most anyone.
Stannard wrote a collection of works on race relations, business, and monopolies, and served as Woodrow Wilson’s press interface in Paris during the negotiations leading up to the Treaty of Versailles. He closed out his life with what is considered a premier work on the life of Woodrow Wilson.
Although I did not agree with his overall conclusions in his work, and his ego seemed to get in the way of his writing, he went into some of the darkest places of our early American cities and states, reported what he saw, and, amazingly, emerged alive to tell the story.
Reporters on Industrialists, Politicians and American Culture
Journalists work in many fields and follow different disciplines in their writing. I haven't found any record that these two knew each other, but they were premier in their respective fields. I believe I will find their mutual admiration documented somewhere ... someday.
A reporter, writer, biographer, and editor to many of the country’s greatest industrialists. His work at System, The Magazine of Business gave him access to the top corporate and political leaders of the time. He is probably one of the most unsung commentators on the leadership of the early 20th Century Industrial America.​
John Gunther’s chief ambition was to go abroad. He appealed to the Chicago Daily News for work in the foreign field, but seniority rules prevented the paper from sending him overseas.  . . . He resigned and caught a boat to England, where he went to work for the Chicago Daily News’ London office. … He was discovered, and asked to resign—he did, but then the paper, after a few months, rehired him based on the quality of his work at the United Press.
​A reporter who turned his years of access to presidents, businessmen, politicians, and celebrities into a hallmark analysis of the changes in the United States of America from 1900 through 1925. His goal: to follow an average American through this quarter century of our country’s history, to re-create the flow of the days as the average American saw them, to picture events in terms of their influence on him, his daily life and ultimate destiny.
[Footnote #1] The Christian Science Monitor writes, “According to some historians, this ringing statement [of George Washington during framing of the Constitution of the United States] caused the framers of our Constitution to be more radical and to avoid compromising statements.”
Return to Bibliography Overview Home Page