A Review of Bernard Baruch's "My Own Story" 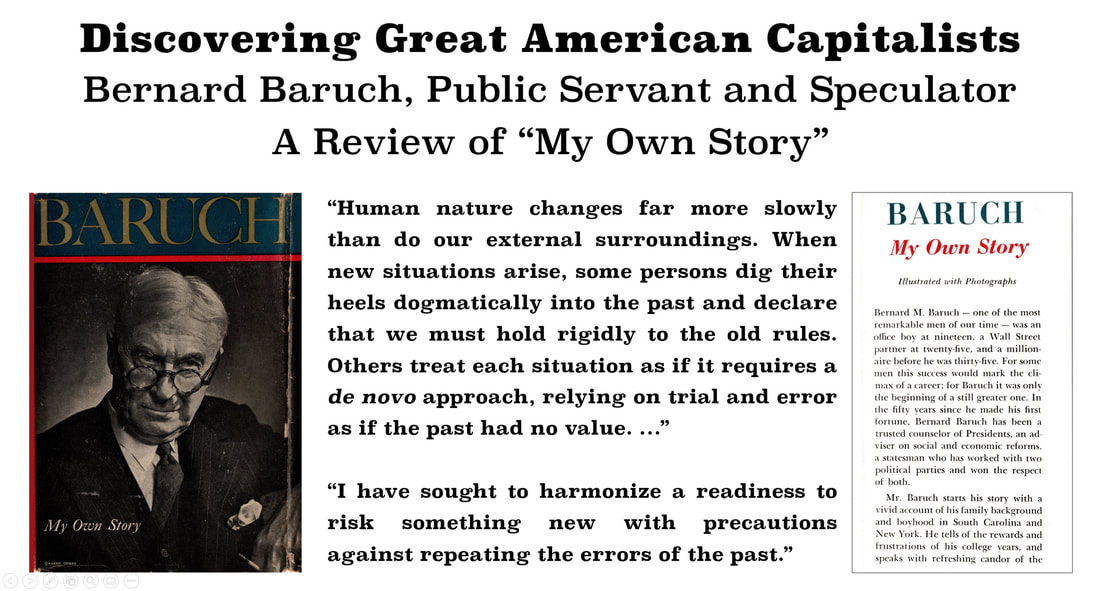 “After I achieved some prominence, in fact, I became a favored target for professional anti-Semites. … These attacks never hurt me as much as did the discrimination my children suffered … It was not easy to explain to my children why they were suffering such senseless discrimination. Instead of allowing these things to embitter and frustrate them, I told them to take discrimination as a spur to more strenuous achievement. …

“Above all, I have told my children not to be blinded to the greatness of America by the pettiness of some of the people in it. The men who wrote the Declaration of Independence were wise in this regard. When they came to define what they conceived as man’s unalienable rights, they chose their words carefully—life, liberty and the pursuit of happiness. Not “happiness” but “the pursuit of happiness.”

“They made no promises of Utopia. They promised only the opportunity to better one’s living. It would be wonderful if laws could be passed which would wipe out bigotry and prejudice. But human nature is not changed so easily.
​
“The key to progress in racial and religious understanding lies in the recognition that the individual gains for his or her own attainments.”

Bernard M. Baruch, My Own Story, 1957
​A Review of "My Own Story" by Bernard Baruch
Reviews of the Day: 1957
"​My Own Story is excellent in almost every respect.

​"The account of Baruch’s boyhood may be a trifle too long … but what of it? When a man has lived 87 wonderful years, he must be allowed some digression in his reminiscences."
​The Salt Lake Tribune, 1957
Checking Baruch's Credentials

By another figure, the job was to bring the whole industrial structure of the United States into one organism, similar to the human body, with materials flowing along the arteries, veins, and capillaries in quantities and at a speed regulated and adjusted by a single intelligence. The “single intelligence” was Baruch, except that Baruch, in the exercise of the many-sided wisdom he possessed, realized that no one intelligence could possibly be enough, and to put away from himself and from the job all notion of autocracy, in fact or in spirit.
​
The men with whom Baruch surrounded himself were an elite of industry. Not that he merely turned to a blue book of business and drafted a list of men who had already come to the top—that would have brought him, for the present purpose, not a few stuffed shirts. Rather he carefully selected men who at once had experience in their fields, together with flexibility of mind, imagination, force, and the qualities of temperament that commended them for a unique, enormous, and intricate job.

​Another point that Mark Sullivan makes is the following in describing Mr. Baruch’s relationship with and calming effect on President Woodrow Wilson:

Bernard M. Baruch, extraordinarily endowed with energy and decisiveness coupled with intuition and considerateness—upon … entering the room, the barometer of Wilson’s spirit, if previously disturbed, would subside a degree or so toward serenity.

Selected Quotes and Insights from Bernard Baruch
As usual in our reviews, Bernard M. Baruch should speak for himself. He was definitely a man ever ready with a quip. Although it is for certain he wasn’t the originator of all these witticisms, the fact that he appealed to them at times showed his line of thinking, and he did add his personal touch!
​
These quotes are not necessarily from the book. They are from a cursory look into some of Bernard M. Baruch’s thoughts covering twenty-five years of his lifetime. This material was readily available in newspaper archives. Peter E. found Mr. Baruch a fascinating study and dug a little deeper into his 80+ year history of speaking his mind on topics that are still of interest today.
These are a few insights from a speculator, financier, statesman, and commentator on the public affairs of men.
​Under socialism you don’t distribute wealth—you distribute poverty.
​The La Crosse Tribune 1950
​Political leaders must keep looking over their shoulders all the time to see if the boys are still there. If the boys are not there, they are no longer political leaders.
​St. Louis Post Dispatch, 1951
​Character and hard work are as important as ability.
​Corsicana Daily, 1957
We didn’t all come over on the same ship, but we’re all in the same boat now.
​The North Hollywood Valley Times, 1957
​The greatest freedom man has is the freedom of disciplining himself.
​The Ida County Pioneer Record, 1957
​​Whatever you undertake, do it with all your heart and soul. Always be courteous, never be discouraged. … Do not blame anybody for your mistakes and failures. Do not look for approval—except the consciousness of doing your best.
​​The Holland Evening Sentinel, 1965
America has never forgotten … and will never forget … the nobler things that brought her into being and that light her path.
​The Long Branch Daily Record, 1967
​Two things are bad for the heart—running up stairs and running down people.
​​Pennsylvania Standard-Speaker, 1972
​It is easier to tell people what they want to hear, rather than what they ought to hear.
​The Montana Standard, 1974
​Old age is always 15 years older than I am.
​The Scranton Times-Tribune, 1975
This Author's Thoughts and Perceptions

​Accommodation to mutual needs remains the best basis for all agreements between nations. Although this may seem like an obvious truth, the record since the end of World War II shows that we have not yet learned how to apply this truth in our dealings with our allies.

We have relied too heavily on the formal wording of treaties and have neglected to do what needs to be done to strengthen the structure of mutual interests which alone can support an enduring alliance. One cannot buy the friendship of other nations. “Friends” acquired in such a way are quick to take offense over anything. Where there is a true basis of mutual interest, however, nations will make excuses for one another's failings and overlook one another's shortcomings. Along with common interest, scrupulous fairness should be observed in dealing with allies.
​
The Golden Rule could be paraphrased and applied to alliances—ask nothing of others that you are not prepared to do yourself.

​​Thomas J. Watson Sr. would have been in total agreement with these words. His own application of the Golden Rule was expressed in a network broadcast entitled “For This We Fight” on June 25, 1943:

​Too many have tried to make this man's world instead of God's world and it just will not work. The Golden Rule is a rule of justice between men and between nations.

​This book was a fascinating read and learning more about "Bernie" Baruch was educational, informative and enlightening.