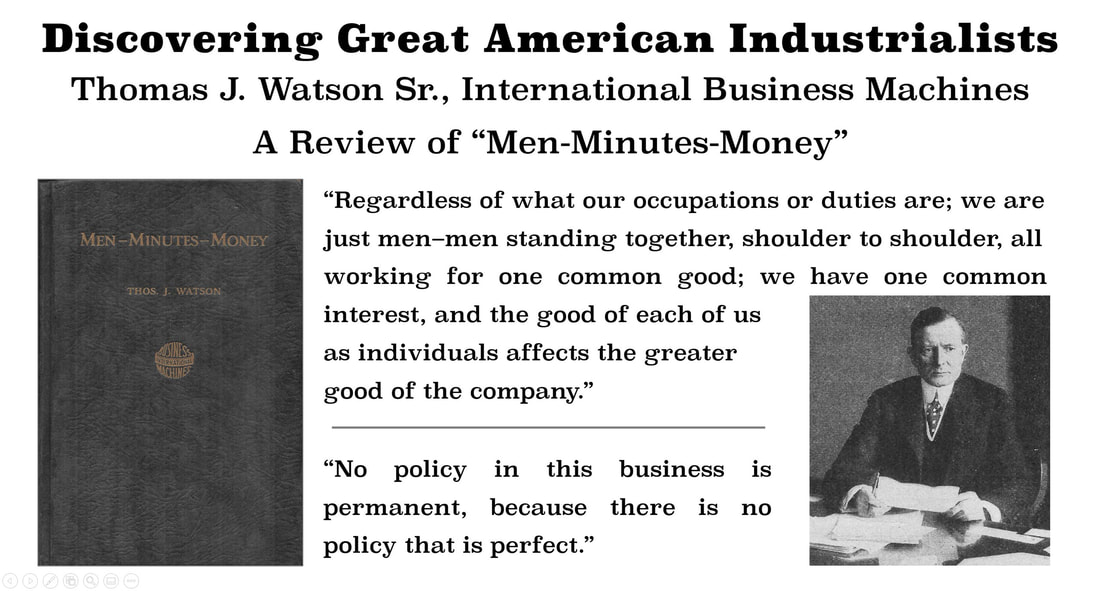 "In these times, when independent thought and action should be the order of the day, employees resent an attitude of paternalism. It is a well known fact, however, that an employee's efficiency suffers if his mind is ill at ease, and that worry over financial troubles is one of the most powerful sources for the destruction of mental peace."
Thomas J. Watson Sr., Luncheon of New York Savings Banks in Hotel Astor, New York, N. Y., 1933
​A Review of "Men-Minutes-Money" by Thomas J. Watson Sr.
Reviews of the Day: 1927, 1930 and 1934
It is fascinating, though, that because of this book it is possible to know exactly what was discussed in the picture below as the speech, Men-Minutes-Money is on page 32 of the 1934 release of the book showing the date of this speech: January 17-21, 1916. Tom Watson started off his speech with these words that he uses many times with his "International" salesmen.

He probably scrolled the three words on the easel as his spoke them.

It seems to me that in this business of ours we have three important things to bear in mind, and regarding them I should like to make brief mention. They are Men, Minutes and Money. 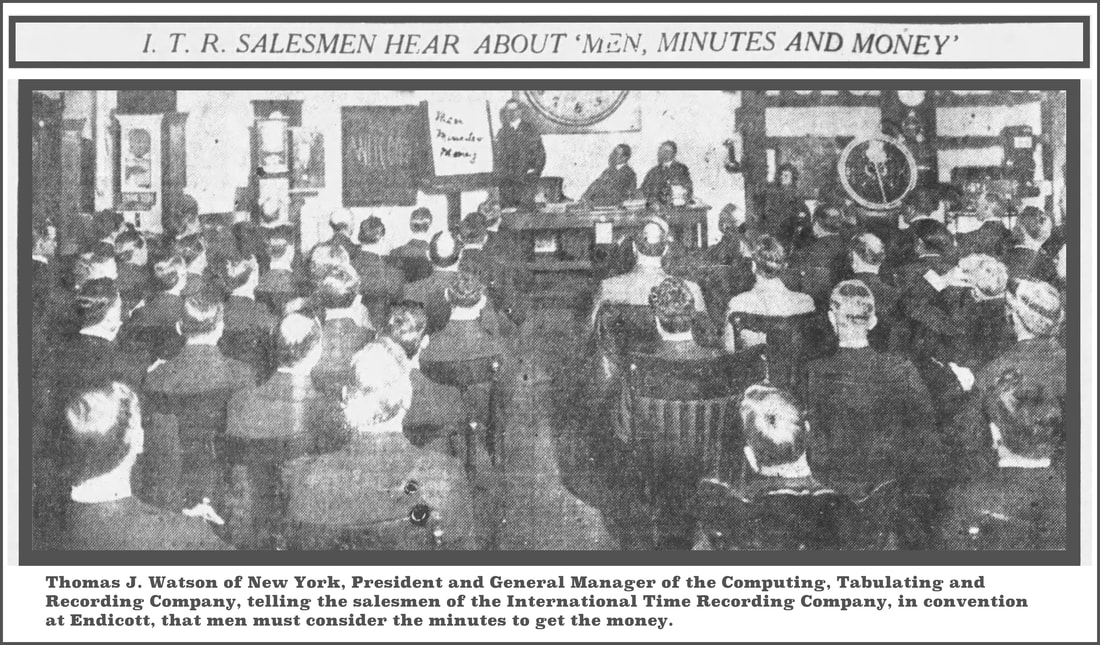 Selected Quotes from "Men-Minutes-Money"
"The success of every major executive depends on the men under him. Their success in turn depends on the men under them. Really successful men are pushed up, not pulled up. Whether he be president or foreman, manager or chief clerk, that man who gets ahead in this or any other business is the one who has learned that next to himself he is absolutely dependent for the progress he makes on the men he controls."
Thomas J. Watson Sr., "To Make a Business Grow--Begin Growing Men," August 1926
"​They say a man is known by the company he keeps. We say in our business that a company is known by the men it keeps."
Thomas J. Watson Sr., Quarter Century Club Meeting, Atlantic City, 1926
This Author's Thoughts and Perceptions
It is rare for any business leader to document their thoughts as thoroughly as Tom Watson Sr. did at the turn of the 20th Century. This book can get repetitious as Watson Sr. spoke many times on the same subject matter. The one-liners and maxims, though, are worth the read and anyone that truly wants to understand the founder of IBM has to read this book. It is his thoughts and words.

This was the source of my 2011 book studying Watson Sr. and the Great Depression, The World's Greatest Salesman.

If this book interests you, I would also recommend reading my review of Human Relations, published in 1949.