How Much Is a Great CEO Worth? 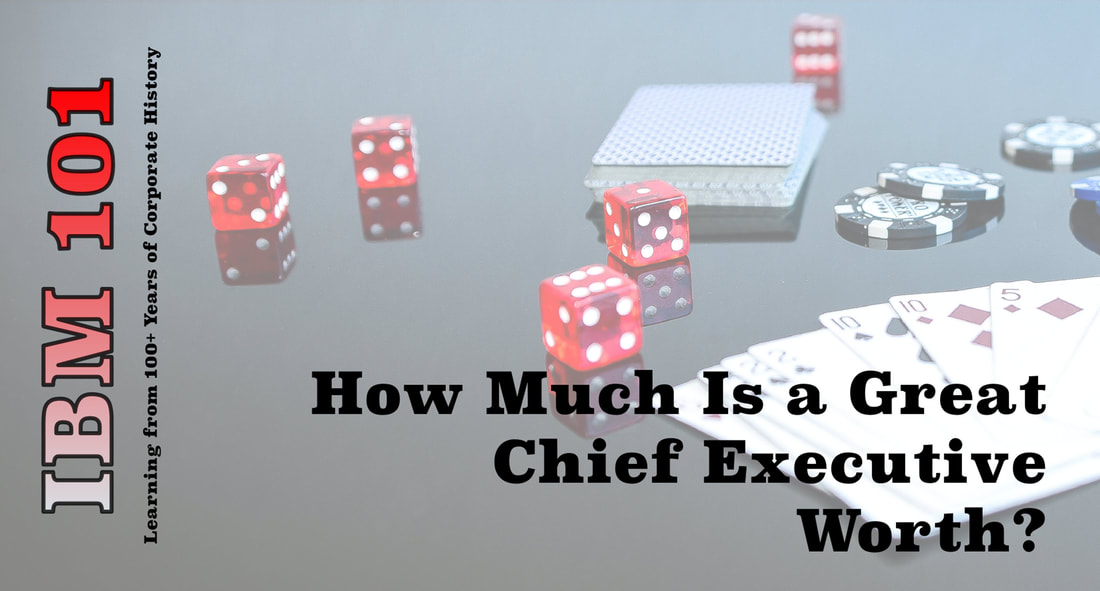 How Much Is a Great CEO Worth?
Politicians Pass A Law to Make Executive Pay Transparent but Fail
The highest paid individual could also be very fluid as the Treasury updated the report as corporations closed out their fiscal years. A business-section headline of the New York Post on May 6, 1936, read, “Watson’s Pay of $303,813 Tops ’35 List.” Less than thirty days later, a business-section headline of the same paper read, “Sloan Highest Paid Executive with $374,505.” By the end of the year, Watson Sr. ended up rather far down the list as the final winner was William Randolph Hearst at $500,000 and Mae West, “the throaty-voiced siren of the screen” running a close second at $450,833 topping such men of fame as Charlie Chaplin, Will Rogers and Fred Astaire.

The report also had its flaws. Not included were incomes from dividends, proprietorships, partnerships, rents or royalties; neither did the act consolidate salaries received from multiple corporations. Many Hollywood stars formed corporations to produce their movies and then received their earnings as dividends. The report also did not measure wealth, as incomes from the capital investments of the nation’s richest families—the Du Ponts, Rockefellers, Fords or Morgans—escaped scrutiny.
Not fair? Surely, but factual. Only a few good newspapers, reporters and editorialists acknowledged these shortcomings or examined the minimal difference between corporate executives’ high salaries in after-tax dollars—tax payments ranged over seventy percent on these high earners.

For more than a decade, most papers just repeated the sensational headlines without context.
Headlines Embarrass Two Great Chief Executives
In 1934, Thomas J. Watson Sr. earned $365,358 in salary, commissions and director’s fees. It was an unfortunate number because it was a natural headline maker. He became “The $1,000-A-Day Man.”

To wrap a modern context around what a worker might have felt when reading this headline, an early 1930’s information technology worker—a tabulating machine operator—earned from $1,000 to $1,500 a year. IBM’s Chief Executive matched their yearly earnings in a day. If Watson were alive today and earned in a day what an average IT operator earned last year, he would be making $85,000 a day or $31 million a year. It is understandable why this sound-bite made headlines: During the Great Depression it was newsworthy, and it sold papers.

Of the thousands of articles published, though, not a single article covered the history of Watson Sr.’s long-term compensation package. His overall earnings were significant, but his pay was directly linked to the corporation’s performance. In 1914, he started at a salary of $25,000 a year and, with profit sharing, averaged $80,000 a year through the end of the decade. After the corporation survived the Recession of 1920-21, his salary increased to $60,000 a year and his commissions were broadened in scope—presumably reaching the level of 5% on all corporate profits after paying $6.00 in annual dividends. As the Great Depression bottomed out in the years of 1933-34, his salary peaked at $100,000 per year, but because of IBM’s performance, commissions were the lion’s share of his total pay—in 1934, $264,432 of the $365,358. He was always, as Charles R. Flint put it when he hired him, getting a “part of the ice he cut.”

The hallmark characteristic of Tom Watson’s time as IBM’s chief executive was the equitable distribution of corporate profits between all his stakeholders; and his open communication of the value of these investments in employee benefits, shareholder dividends and customer products, that created a like-minded, sustainable stakeholder community. If anyone thinks that these stakeholders were overly concerned with Watson Sr.’s pay as their chief executive officer, their response to the federal act’s salary disclosures settles this question.

It was less than a year after the trough of the Great Depression, that the press started publishing the salaries of the chief executives in the United States. It was dark economic times for the country. The front-page headlines embarrassed many of the better executives. George F. Johnson, Chairman of the Board of the Endicott-Johnson Corporation, wrote in his factories’ hometown newspaper in Binghamton, New York:

"Some people would feel honored to see their names in a list of American citizens reported as having ‘a million dollars a year income.’ The effect of such a publication, to me, is disgusting. I am ashamed and mortified. … Any man who dies rich, dies disgraced especially in times like the present, when so many men, women and children are suffering for the common necessities of life."

He goes on to explain how he has been investing in the business during the depression and shared the profits from the corporation with his employees, shareholders and the local tri-cities community: “in the neighborhood of twenty-six to twenty-eight million dollars in cash and stock.”​
The Stakeholders Define Executive Greatness
Tom Watson explained his salary and commission structure while standing in front of his annual shareholder meetings. He also explained to shareholders the value of continuing to invest in the corporation’s human assets—its employees. Then he explained to employees why the shareholders—the owners of the corporation—were due a fair return on their investments. In essence, he was explaining how all of them were sharing equitably in the ice "they all cut."
​
In 1934, at his twentieth annual meeting with shareholders—with more than seventy-seven percent of the stock represented in the audience, and at that time, the second largest percentage of stock representation in the history of the company—the shareholders passed the following resolution:

"The stockholders here present at the annual meeting of the International Business Machines Corporation do hereby express their appreciation to Thomas J. Watson, their president, for his matchless achievements as their president during a long term of years, and for his honesty, integrity and worth as its executive officer. The manner in which he carried our corporation through the depression has been masterful. We express our supreme confidence in him."
Especially, when the country needs new turn-around corporate leadership not jettison-now management—just like during the Depression.​
So, How Much Is a Great Chief Executive Worth?
"​When one serves for the sake of service—for the satisfaction of doing that which one believes to be right—then money abundantly takes care of itself. Money comes naturally as the result of service."
Henry Ford, My Life and Work
A study of IBM’s history of successes and failures substantiates Henry Ford’s perspective that a chief executive’s overall performance is directly associated with their personal priorities: (1) if an executive’s primary motivation is a self-serving, short-term monetary gain, stakeholders should expect a lackluster, long-term performance—usually coming at the expense of one – or all – of the members within their community; (2) if an executive’s primary motivation is to grow long-term corporate wealth by building a sustainable, supportive stakeholder community, then strong, long-term, balanced returns can be anticipated.
IBM’s Greatest Chief Executive Officers placed more value on loyalty, and the money came to them naturally as a result of their service.
Return to Corporate 101 Articles Home Page