A Review of Burton J. Hendrick's "The Age of Big Business" 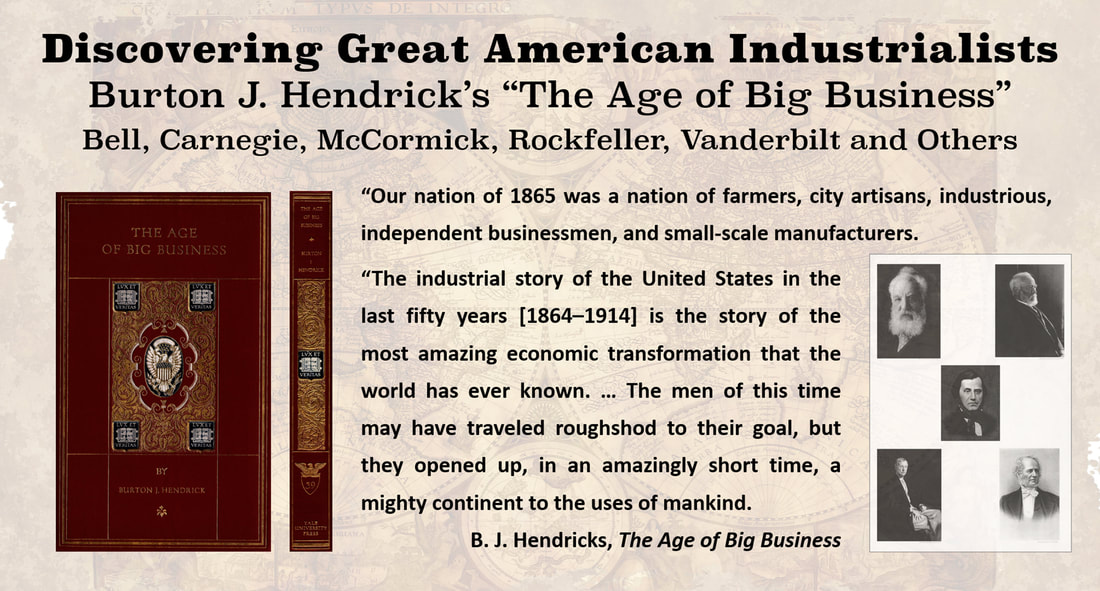 A Review of The Age of Big Business by Burton J. Hendrick
Reviews of the Day: 1919
“To our perhaps uncultured mind, the best book of these Yale histories so far—the most needed, the most interesting—is Burton J. Hendrick’s ‘The Age of Big Business.’ These fragments [about American industrialists] give the nature of the book but not wholly its fascination, part of which is due to a personal portrait here and there and part to the lucidity and honesty of the author.”
“The Age of Big Business,” The New York Herald Sun, March 30, 1919
Observations of B. J. Hendrick on American Industrialists and Capitalism
“Ford has spurned all solicitations to join combinations. Far from asking tariff favors, he has entered European markets and undersold English, French, and German makers on their own ground. Instead of taking advantage of a great public demand [for his automobiles] to increase his prices, Ford has continuously lowered them. Though his idealism may have led him into an occasional personal absurdity, as a business man he may be taken as the full flower of American manufacturing genius.
​
“Possibly America, as a consequence of universal war [World War I], is advancing to a higher state of industrial organization; but an economic system is not entirely evil that produces such an industry as that which has made the automobile the servant to millions of Americans.”
This Author’s Thoughts on The Age of Big Business
This is my favorite passage from the book. By using the history of Cornelius Vanderbilt as an example, B. J. Hendrick paints a wonderful, dark-and-light portrait of the questionably-dark, business tactics but also the blindingly-light business accomplishments of one of the post-Civil War’s better-known industrialists/capitalists:
“In this operation Vanderbilt typified the era that was dawning—an era of ruthlessness, of personal selfishness, of corruption, of disregard of private rights, of contempt for law and legislatures, and yet of vast and beneficial achievements. The men of this time may have traveled roughshod to their goal, but after all, they opened up, in an amazingly short time, a mighty continent to the uses of mankind.”
B. J. Hendrick does a wonderful job painting in-depth, black-and-white documentaries of our post-Civil War’s greatest industrialists and capitalists. He leaves it up to the reader to decide: If we could go back and change these practices, would we? If we changed things, would we make the country—overall—a better or worse place for its citizens?
​
In so many ways we live in a greyscale world and Burton Hendrick writes of both the white and black—leaving the greyscale judgements to us—and history. I appreciate this approach: Give the reader the details, both good and bad, and let them think for themselves.
​
I am sure it would make for one lively discussion!

Isn’t that the purpose of most prose?