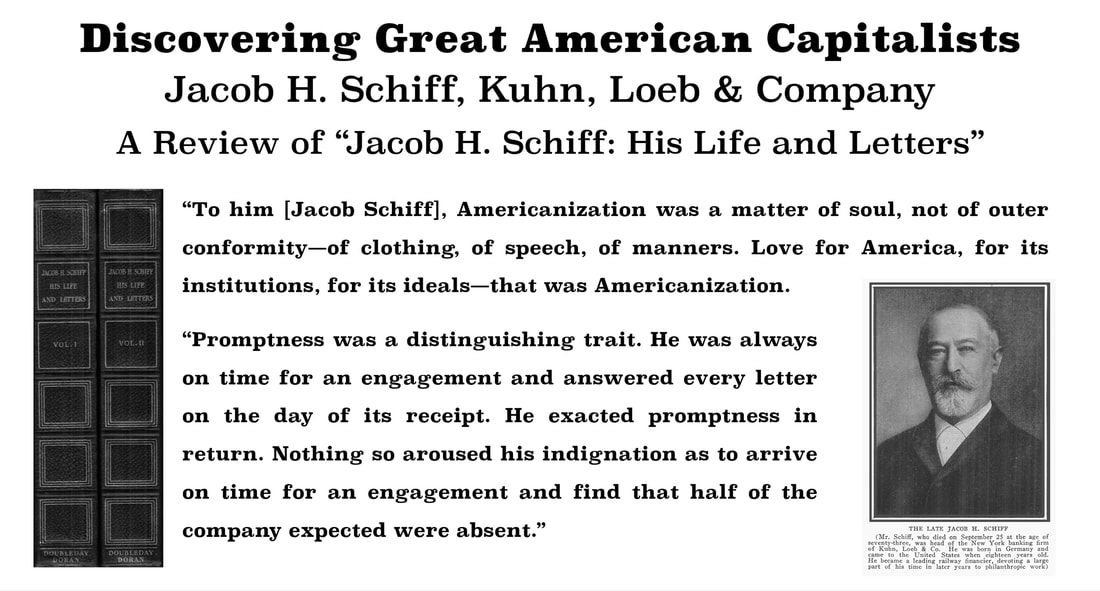 Lillian D. Wald, Henry Street Settlement wrote at the time of Jacob Schiff's death:
​“His [Schiff’s] sense of justice – offended repeatedly – brought forth a gallant fighter for the oppressed. … He cherished intensely the preservation of the high principles upon which our America has been built, and particularly the right of asylum for the oppressed. …

"Loving sorrow for the friend who has gone, dims the eye and floods the heart, but the outlines of a truly great citizen are clear. … He loved his fellow men, and his keen mind was never obscured by his emotions. He gave both heart and intellect to what, I am sure, were the greater interests of his life.
​
“The history of measures and movements for social betterment in America will be found in the record of Mr. Schiff's life.”
​A Review of "Jacob Schiff: His Life and Letters" by Cyrus Adler
​​“Dr. Adler’s record of Mr. Schiff feels like autobiography, but it is not. It is better than that. … One’s first general reaction to this study is that of pure amazement at one man’s power to achieve in so wide a range of public concerns and to respond to so great a variety of personal demands. … a survey of modern business history.”
​Ida Gilbert Myers, The Washington D. C. Sunday Star, December 30, 1928​
“The picture is not without its faults, and critics of the book will have much to say about it. … there is no critical appraisal of the man. … While there is plenty of sunshine there is little shading in that picture. … On all questions his is the only testimony taken. … but these shortcomings … do not affect our interest in the subject … of this book. … Jacob H. Schiff was really an extraordinary man—extraordinary for his great gifts of heart and mind, extraordinary for the unbound, almost romantic love of his people, extraordinary for his heroic and fearless espousal of the cause of his people. … Mankind is enriched by the story of such a man.”
​
​Rabbi Jacob S. Minkin, Jewish World, The Edmonton Journal, February 23, 1929​
​“A millionaire is able to engage the most skillful dentist or doctor or portrait painter. Why cannot he, or his heirs … also secure the services of the most skillful biographer? What we have here is a C-3 life of an evidently A-1 man. It is a great pity, for Mr. Schiff’s character and career offered a real opportunity to a competent writer.”​
​Books of the Day, The Manchester Guardian, April 15, 1929
Selected Insights from "Jacob Schiff: His Life and Letters​"​​
“Promptness was a distinguishing trait. He was always on time for an engagement and answered every letter on the day of its receipt. He exacted promptness in return. Nothing so aroused his indignation as to arrive on time for an engagement and find that half of the company expected were absent.”

“He was a hero-worshipper, although in a restricted and unusual sense.

“He had high respect for position. The ruler of a state, or a great official, an ecclesiastical dignitary, or the head of a university, a great painter or sculptor, were all people to whom he looked up and with whom he was glad to be in association. But it was rather respect for ability in a given direction than success as such which attracted him. …
​
“He was willing to sit at the feet of other people, and to learn from them. … He would learn from anybody, and in this attitude he was greatly helped by his love of mankind and his interest in people as such.”

His house has raised capital for scores of transportation and industrial enterprises, and it is a Wall Street saying—one of Wall Street's rather few true ones—that Kuhn, Loeb & Company have issued more good investments and fewer bad ones than any other banking concern in America. …

His fetish is not, as popularly supposed, Judaism, but citizenship. It is his creed that a man must first, last, and always be a good, loyal citizen, intensely zealous in discharging all the responsibilities of citizenship. With him citizenship ranks above sect. He holds that unless a man is a worthy citizen he cannot be either a worthy Jew or a worthy Gentile. …
​
I do know that he is among the best friends the Jews of America have ever had. … he has, without blowing of trumpets, helped many a poor Jew and Gentile, black as well as white, … I do know, in short, that Jacob Schiff is a man whom any race might well be proud to call its own.

​I do need to be careful of my thoughts on this book that they don’t come across as criticism. If this were a book about Thomas J. Watson Sr. I would absolutely be singing its praises. A similar compilation of letters for this author on the founder of IBM would be priceless. But for an individual just trying to get a sense of the man, his background and his beliefs—without a lot of deep research—this was not the book. The eight pages in B. C. Forbes’ book mentioned above provided more high-level and quick insights into the man, although, this book and his letters confirm quite firmly what Forbes wrote in 1917.
​
I found Chapter 18 in Volume 2 was the chapter I enjoyed the most. It provided this physical description of Mr. Schiff and contained much of why I purchased this biography:

Schiff was short of stature, of medium build and erect carriage. He had blue eyes capable of expressing compassion or indignation. He wore a beard which in later years grew white, and he was always carefully dressed for every occasion. A flower usually graced his buttonhole.

This having been said, I found great enjoyment in reading many of the full, unedited letters. Reading them is like reading a primer of Dale Carnegie on “How to Win Friends and Influence People.” They are amazing pieces of work that show the heart of the man. If I were working on a book about Jacob H. Schiff, I would start here and move forward.

For my purposes, it served the purpose set out in the foreword and preface, so I truly enjoyed reading it. It was just a lot of work for minimal gain … c'est la vie! I am actually used to that in my research. As always there is usually one chapter that provides some insights I can use. This was Chapter 18 previously referred to in this article.
​
Perspectives from this chapter, I thoroughly enjoyed as it, I believes, also offers some insights into the character of Thomas J. Watson Sr., and many men of this age:

But in spite of the quality of exceptional gentleness and kindness of which I have spoken, Mr. Schiff could on occasions be not only severe, but uncompromisingly severe. I think that it is not hard to find the explanation of this quality in a man ordinarily so gentle. His conscience  set very high standards for his own conduct and he held himself to a rigid adherence to those standards.

He was uncompromising in applying his moral standards to his own conduct and that made him uncompromising in applying to others the standards he so rigidly applied to himself. I think that this analysis explains the not infrequent judgments of Mr. Schiff upon the conduct of others which at the time seemed harsh.
​
They were not harsh from his point of view, because he was simply requiring of others adherence to the same moral standards that he imposed upon himself.

He sounds in many ways like my father, who was of similar German heritage and weathered the Great Depression in the Civilian Conservation Corps camps of Wisconsin.