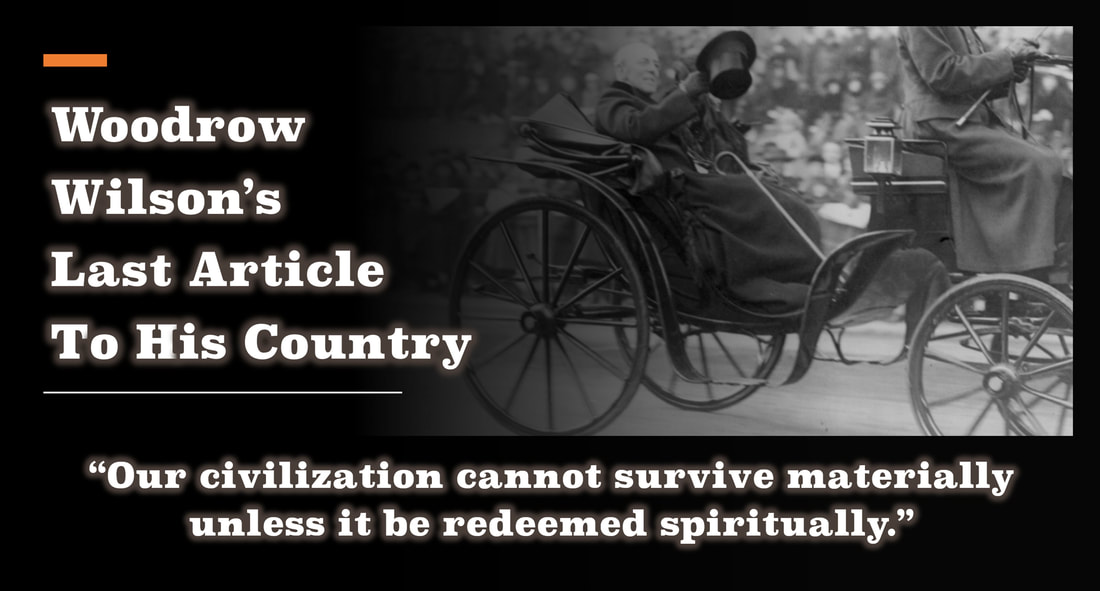 ​"It must include sympathy and helpfulness and a willingness to forgo self-interest in order to promote the welfare, happiness, and contentment of others and of the community as a whole. This is what our age is blindly feeling after in its reaction against what it deems the too great selfishness of the capitalistic system."
Woodrow Wilson, "The Road Away from Revolution"
The Last Article Ever Written by Woodrow Wilson
This last essay by Woodrow Wilson, slowly and painfully dictated to his wife during the spring of 1923 in their Washington house at 2340 S Street, N.W., was published in 1923 in The Atlantic Monthly.

This article was bequeathed by Mrs. Wilson to the National Trust for Historic Preservation [Copy Number 241].

This is Woodrow Wilson's article "The Road Away from Revolution" in its entirety.
Woodrow Wilson: "The Road Away from Revolution"
What gave rise to the Russian Revolution? The answer can only be that it was the product of a whole social system. It was not in fact a sudden thing. It had been gathering head for several generations. It was due to the systematic denial to the great body of Russians of the rights and privileges which all normal men desire and must have if they are to be contented and within reach of happiness. The lives of the great mass of the Russian people contained no opportunities but were hemmed in by barriers against which they were constantly flinging their spirits, only to fall back bruised and dispirited. Only the powerful were suffered to secure their rights or even to gain access to the means of material success.

It is to be noted as a leading fact of our time that it was against “capitalism” that the Russian leaders directed their attack. It was capitalism that made them see red; and it is against capitalism under one name or another that the discontented classes everywhere draw their indictment.
​
There are thoughtful and well-informed men all over the world who believe, with much apparently sound reason, that the abstract thing, the system, which we call capitalism, is indispensable to the industrial support and development of modern civilization. And yes, everyone who has an intelligent knowledge of social forces must know that great and widespread reactions like that which is now unquestionably manifesting itself against capitalism do not occur without cause or provocation; and before we commit ourselves irreconcilably to an attitude of hostility to this movement of the time, we ought frankly to put to ourselves the question, “Is the capitalistic system unimpeachable?” Which is another way of asking, “Have capitalists generally used their power for the benefit of the countries in which their capital is employed and for the benefit of their fellow men?”

Is it not, on the contrary, too true that capitalists have often seemed to regard the men whom they used as mere instruments of profit, whose physical and mental powers it was legitimate to exploit with as slight cost to themselves as possible, either of money or of sympathy? Have not many fine men who were actuated by the highest principles in every other relationship of life seemed to hold that generosity and humane feeling were not among the imperative mandates of conscience in the conduct of a banking business, or in the development of an industrial or commercial enterprise?

And if these offenses against high morality and true citizenship have been frequently observable, are we to say that the blame for the present discontent and turbulence is wholly on the side of those who are in revolt against them?

Ought we not, rather, to seek a way to remove such offenses and make life itself clean for those who will share honorably and cleanly in it?

The world has been made safe for democracy. There need now be no fear that any such mad design as that entertained by the insolent and ignorant Hohenzollerns and their counselors may prevail against it. But democracy has not yet made the world safe against irrational revolution. That supreme task, which is nothing less than the salvation of civilization, now faces democracy, insistent, imperative. There is no escaping it, unless everything we have built up is presently to fall in ruin about us; and the United States, as the greatest of democracies, must undertake it.

The road that leads away from revolution is clearly marked, for it is defined by the nature of men and of organized society. It therefore behooves us to study very carefully and very candidly the exact nature of the task and the means of its successful accomplishment.

The nature of men and of organized society dictates the maintenance, in every field of action, of the highest and purest standards of justice and of right dealing; and it is essential to efficacious thinking in this critical matter that we should not entertain a narrow or technical conception of justice. By justice the lawyer generally means the prompt, fair, and open application of impartial rules; but we call ours a Christian civilization, and a Christian conception of justice must be much higher. It must include sympathy and helpfulness and a willingness to forgo self-interest in order to promote the welfare, happiness, and contentment of others and of the community as a whole. This is what our age is blindly feeling after in its reaction against what it deems the too great selfishness of the capitalistic system.
This Author's Opinion
Return to Spiritual articles Home Page