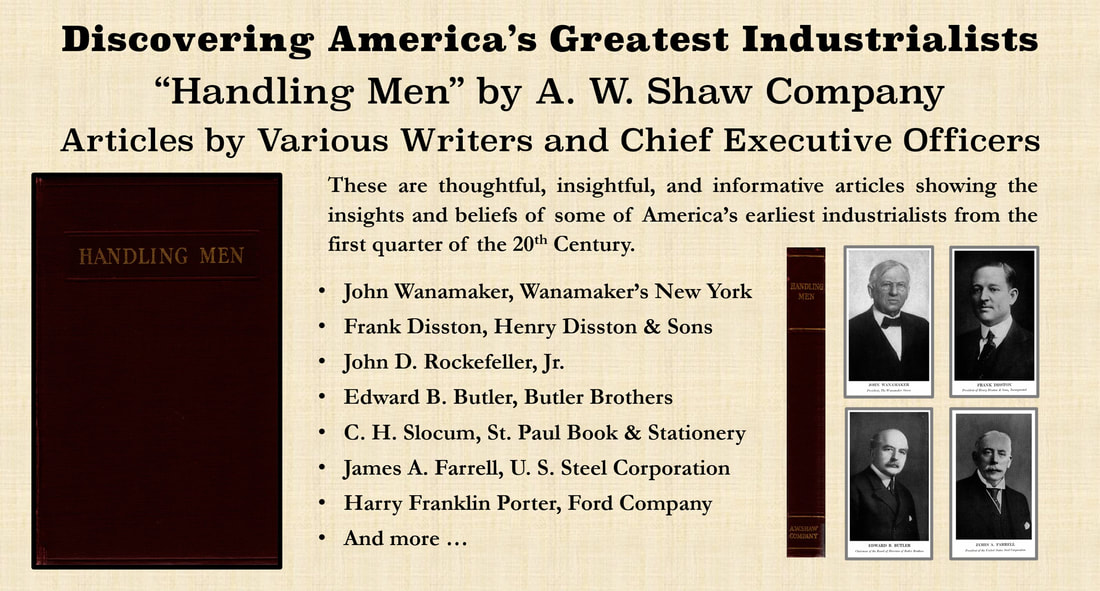 “Handling Men” was published in 1917 and is a collection of articles written by American Industrialists on a variety of issues categorized in the following manner with each section introduced by an individual of distinction of the day.
​
The abbreviated, single-page introductions to these four sections are included in this review.
[Editor’s note: In some places “men” has been replaced with the word “employee” or “workers.” This change was made so that the core value—the main idea of each chapter, would not be lost to a reader today. This author believes that many of these executives used the term “men” in a generic sense for all of “mankind,” including women.
​
As proof of this, read the included sidebar with John Wanamaker’s article—the first introduction provided in this section. He writes adamantly about women’s place in the retail work environment and how they were achieving higher status in the business world.]
Peter E. Greulich
A Review of A. W. Shaw's "Handling Men"
Reviews of the Day: 1917
​There were no reviews found for this book in the timeframe of its publication.
Some Observations of Early 20th Century Industrialists
​"My theories are not at all original. They were first stated in the Golden Rule. I restate them because so many employers have confused effectiveness with what might be called non-humanity.
​
"Each human machine requires its own peculiar oil."
Henry L. Willard, President, Brooklyn Traffic Club, 1917
​"A machine is a unit of a “plant investment” with very restricted limitations. It performs today what it did yesterday, provided it is well taken care of, protected from harm and abuse, oiled, fed with power, and given periods for rest and repair. A worker is a human being, the highest expression of cosmic creative power, a person of peculiar inherent abilities, capable of great development, with thoughts and feelings responsive to human interest and justice."
William Armstrong Fairburn, President, Diamond Match Company, 1917
Four Executive Introductions in "Handling Men"
"​We put our chief trust in men; they know it and make good."
Handling Men: How to Hold Your Men
Frank Disston, 1917
​"He overlooks the fact that back of—and under—every great success, there are years of right thinking and right doing—cemented columns of honest effort and honest dealing—which, like massive piers of concrete, will sustain that business from generation to generation ."
Handling Men: Breaking in and Developing Men
Edward B. Butler, 1917
"Handling Men: Putting More than Money in Pay Envelopes"
​James A Farrell, 1917
This Author's Thoughts on this Collection by A. W. Shaw
This is another amazing collection of articles from the A. W. Shaw Company. Every page has “quotables” which come from a wide collection of business men from around the country and across a variety of industries. The companies’ chief executives wrote some of the articles, and some articles were the work of writers based on extensive investigations, interviews, and formal inquiries.

As always, something new was revealed about Tom Watson Sr. In studying his life, it was initially thought that it was an original policy of his to pay his employees a salary while they were in the service of their country during World War II and also guaranty them their jobs upon their return. In my research. I discovered that George Eastman of Eastman Kodak Company and a good friend of Tom Watson’s continued the full pay for those employees who attended the Plattsburg camp in preparation for World War I less only “an amount equal to the sum received by them for military services.”

​Now in this series of articles I discovered the following written by Frank Disston, President, Henry Disston & Sons, Incorporated:

When the Civil War came on, Henry Disston [founder of the company] told the men that he would give volunteers a bonus of half the  army pay and hold their jobs open. A company was formed and went to war; the survivors came back to the shops. The force was a sort of family, and a family it has always remained.
Its history repeated itself in 1915, when the same arrangement was carried out with the forty employees who answered the call of the militia and served on the border.

​There is no doubt, though, that the extensiveness and completeness of what Tom Watson provided for IBM servicemen exceeded any benefits paid in earlier times. It was not a difference in kind or intent but in completeness of coverage: both the quality and the quantity of coverage.
Return to A. W. Shaw's Bibliography Home Page