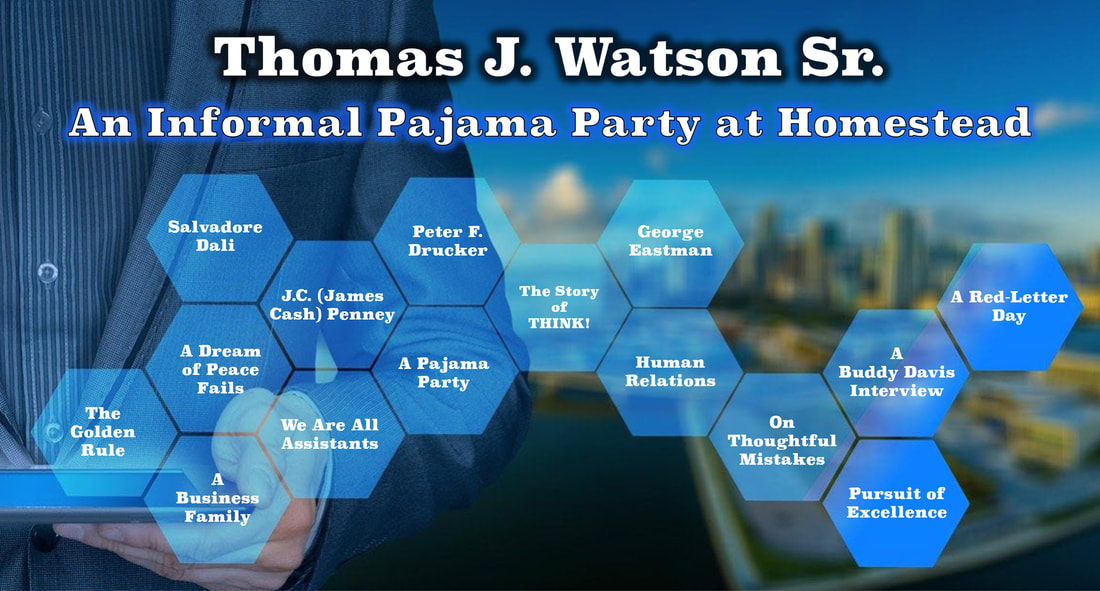 An Informal Pajama Party
​The following is a wonderful and heart warming story of her leadership during World War II when it was women who kept IBM running. Without her and the women of the Systems Service Organization, IBM would not have been the company it is today. The title of this short section in her book is: "Prize Students and Pajama Parties." I know it says that they "confiscated" all the pictures, but I am sure someone kept one somewhere. If you have it or other pictures to share from your time as a member of IBM's Systems Service Organization, contact us. I think the picture would be recognizable: it would be a picture of a distinguished-looking 68 year old man surrounded by a 100 of the top women graduates of the colleges of their day dressed in Dr. Dentons. I would love to publish them in my next book.

​Now that we know the whole story behind the pictures, I think it would be okay. Don't you?
We had an exceptional class that summer [1942] of one hundred women graduates from some ninety colleges and universities. Most of the students had served as either president or vice president of their class or entire student body or had received straight A's all through their college careers. As an introduction to their training in Endicott, I told the group, ''I want to compliment each and every one of you on the outstanding records you achieved in your college years. Today, you embark on a different course of study, both intensive and extensive. You all finished at the top of your respective classes for the last four years, but don't worry if you fail to achieve that status in this school. You've never before faced the level of competition that awaits you here.

''We've told you that as a systems service woman your job includes handling some of our customers' accounts. Their needs must be satisfied, for a disgruntled customer can mean a loss of several thousand dollars if he chooses to return our equipment. It also can mean the loss of a valued customer and his future business. So, we will train you to protect the revenue of this business. You will be our unsung heroines.''

Some of these prize students did have difficulty accepting that they no longer sat at the top of their class. I spent one night walking the golf course into the wee hours with a distraught student who even contemplated suicide. Another wanted to leave Endicott because she had received a ''B'' on a test. On the whole, though, they were an outstanding group who enjoyed fun and frolic after study hours.

Tent City [recommended my Ms. Leach over the objections of Watson Sr.] worked beautifully until the end of August when the nights grew cooler. One of the girls from the South complained bitterly of the cold to Mr. Watson on one of his visits to Endicott. He then, of course, complained to me. I remembered at our camp in the Sierras we put newspapers under the mattresses to make the beds warmer, and we did that immediately. I also bought electric heaters for each tent.

We coaxed my roommate Jane Parrish, a bugler, to rouse us happily in the early mornings with reveille, followed by snappy tunes, and then to end the day with Taps. Poor Jane had to sleep with her trumpet under her covers to keep it warm so it could perform properly on cold mornings.

I also instigated what I called ''latrine parties," with each group taking a turn as ''hostesses'' near but not too near a numbered latrine at 9 p.m. on certain nights. They served hot chocolate, coffee, sodas, and cookies, or whatever they wanted. I tried desperately to make them all comfortable.
When I met him the next morning, standing beside a black lace nightie at the entrance to the department, I asked, ''Arch, have you ever been in a ladies' lingerie department before?'' I thought not, judging from the color of his face and the nervous twitch he always developed when faced with anxious moments of any kind.
​
''Heavens, no, Ruth, I'll just let you go ahead and do the honors, if that's all right with you."

''But Arch, look at these ecstatic sales girls. They just know I'm your cutie, and you plan to buy me some expensive slinky number. When we ask to see some Dr. Dentons, they won't believe us. You don't want to miss their expressions then, do you?'' Arch needed prodding to have a little fun, but in the end we had a great time hamming it up.

We found what we wanted, the cotton flannel one-piece pajamas with footies and a buttoned ''back door." and handed the salesgirl an order for some two hundred pajamas in various sizes. As she busily wrote down the details, she suddenly asked, ''Are you two running some kind of camp?''

In a quiet but steady voice I answered, ''No, it's a business.'' I'm sure we left her in a complete quandary, wondering what sort of monkey business we might be up to.

The next evening in Endicott the weather turned quite cold. In gratitude for their new nighties, the entire systems service class donned their new pajamas over their own clothing and paraded slowly in single file around the circular driveway in front of the Homestead entrance, each girl holding a lighted candle and singing a ''Thank you, Mr. Watson'' song they had composed themselves with Jane Parrish's help.

Mr. Watson watched from the door and felt so touched he invited the entire group into the dining room, pajamas and all, for hot chocolate and cookies to warm them up. Somehow, photographers appeared from nowhere, and bulbs flashed at our leader surrounded by a sea of Dr. Dentons.

We all sang old songs, and everyone had a merry time except me. I suddenly felt very nervous about such a scene appearing on the front page of any newspaper, particularly IBM's. Mr. Watson would look ridiculous, and no one would believe the girls were fully clad in sweaters and wool slacks underneath their pajamas. So I forced myself to whisper in Mr. Watson's ear that we really should confiscate the films right then, for obvious reasons. For once he agreed with me, and I told Arch to take care of the photographers and their film. After a few more songs, the party ended.
Ruth Leach Amonette, Among Equals
Return to the Thomas J. Watson Sr. History Home Page