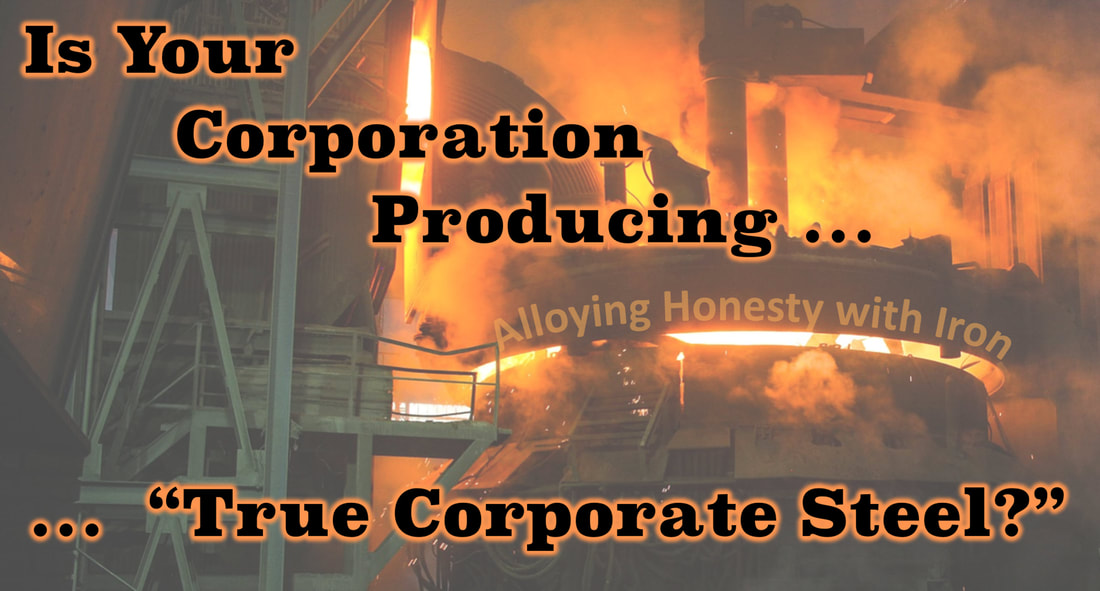 20th Century Definition of True Corporate Steel: Organizations where employee engagement, passion and enthusiasm provide the necessary tensile strength to withstand competition, recession, and depression.
Producing True Corporate Steel in the 21st Century
​Introduction
So, she initially resisted writing the biography of Judge Gary [read review here]. She accepted the task only after he gave her full access to any information and any individuals needed to write a factual accounting. Judge Gary’s openness won her over, but she was roundly criticized.
"His [George M. Verity’s] chief pride lay in the fact that, in more than forty years, misunderstanding between management and men had not cost his company one ounce of lost production nor his men one cent of lost wages. … He achieved the distinction of having made steel without strife. It is a rare distinction. … That it has been done in—of all places—the steel industry, which has furnished all too many dark and sordid chapters in industrial history, seems to indicate that there may be many additional possibilities … to produce true steel by alloying honesty with iron [emphasis added]."

Of any industry, the steel industry and its associated businesses experienced open warfare between labor and capital. Yet, B. C. Forbes presented the “Humanizer of Industry” award to George M. Verity for his leadership of the American Rolling Mill Company (Armco).

B. C. Forbes in his day enjoyed breaking molds too.
In a meeting after the award ceremony, B. C. Forbes told a group gathered at Mr. Verity’s home:

"I don’t think I need to remind anyone here that the steel industry has had a particularly unsavory reputation for having been headed by tough babies. I’ve known most of the heads of this industry personally. Seeing you workmen in this [George Verity’s] home, I’ve been thinking how utterly unlikely such a gathering would have been in the homes of some of the autocrats I’ve known.
" ​If only fifty-one per cent of the nation’s industrialists could learn the value of the Verity formula, and apply it, we should not have to fear for the future of America."
​
American Rolling Mill Company was a part of the despised steel industry, but according to Mr. Forbes and Christy Borth, George M. Verity, his executives and the men they worked with rose above it all.
​
But are our 21st Century chief executives rising “above it all?”​
The Author's Opinion
​The performance of IBM’s 21st Century chief executives suggests not, or as George M. Verity describes in the sidebar above" the corporation hasn't had the proper corner office "management" to ensure that "the investor's cigar is properly lit."

Here are a few examples at IBM:​ In the words of Mr. Forbes, not a single one of these twenty-first century chiefs has treated their employees as “folks should be treated.” ​This author wonders what an Ida M. Tarbell would write of these three individuals? If she studied our country’s chief executives, what percentage would she discover alloying honesty and openness with an employee’s iron-like loyalty to produce true corporate steel: organizations where employee engagement, passion and enthusiasm provide the necessary tensile strength to withstand competition, recession and depression?

Will we wait for the next economic downturn to find out?

That seems so … nineteenth century, doesn’t it?
​
And so foolhardy.
​[Footnote #1] On May 15, 1911, The U.S. Supreme Court ordered Standard Oil Company dissolved within six months. On July 31, the company made public its plan for dissolution to take effect on December 1.

[Footnote #2] B. C. Forbes wrote, “I can still see Tom Watson surrounded, at the lunch hour, by a crowd of his workers. It began by one employee, who spotted him, shaking hands with him, on the sidewalk in front of one of IBM’s factories. Soon others assembled. There was a continuous hand shaking, talking, fraternizing.”
Return to business articles Home Page