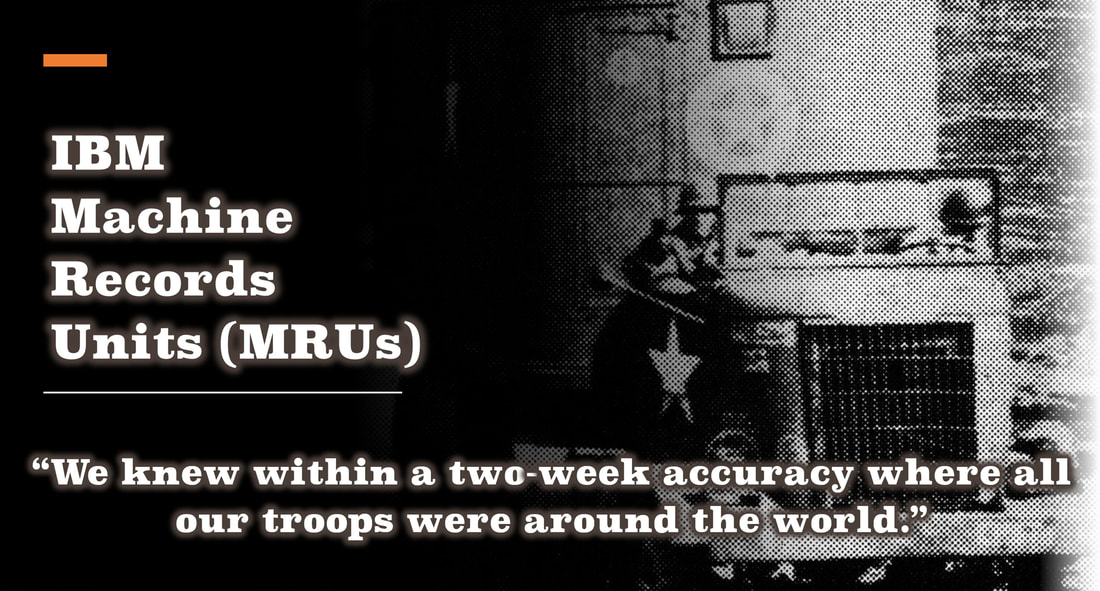 Russ, passed away in 2018. I enjoyed watching his postings on Facebook, and our occasional communications. There is one less World War II Veteran, one less IBMer and one less good man walking this earth. He will be missed. Russ was the individual who called my attention to the importance of this IBM development to support the World War II effort.
Peter E. Greulich
We Are Losing Our World War II Veterans
The First-Hand Story of Machine Records Units (MRUs)
​When I asked the 95 year old on the phone—my elder by 35 years—what his job was during World War II, he simply commented, “I went ashore at Normandy on D-Day+3. My job was to follow General Patton with a string of wire.”
Machine Records Units (MRUs)
Mobile Machine Records Units (MRUs) were the invention of Lieutenant Arthur K. (Dick) Watson, son of Thomas J. Watson Sr. He proposed housing punch-card machines in army trucks for mobile use in combat zones. It was a unique application of IBM Electronic Accounting Machines (EAM) with their installation in deployable units, which followed the troops—sometimes under fire—gathering, evaluating and forwarding intelligence.

These units would keep track of bombing results, casualties, prisoners, displaced persons, and supplies. Russ commented that, “We knew within a two-week accuracy where all our troops were around the world.” This was, at the time, a wartime advantage. The same type of machine was used to break the Japanese code before the Battle of Midway, help hunt down and sink German U-boats, and architect the atomic bomb that finally ended World War II.
The 20th Century IBM supported its veterans
"We, too, are proud of our service man, and glad too that he was employed by a company whose understanding and policies make it possible for him to do his duty with no worries about those at home. We came to IBM 10 years ago after being on government relief. Today we owe no bills. We have built and paid for our home, and my husband is free to do the work he feels will mean most to our country, knowing that I have a job with the company, and can keep things going at home. . . . This is what our opportunity to work at IBM means to us."
A letter published in IBM Business Machines, January 27, 1944

IBM limited its wartime profits on ordnance production to one and one-half percent—and two-thirds of IBM’s factory capacity was dedicated to that ordnance work. IBM, in addition to manufacturing computers, produced machine guns for fighter planes, infantry carbines, bombsights, gas masks, and more than thirty other war items. IBM set up a nine-panel display in its headquarters listing all of its employees in the service [seen above].
May we never forget or neglect.