To Grow a Business: Think, Act, and Let Go! 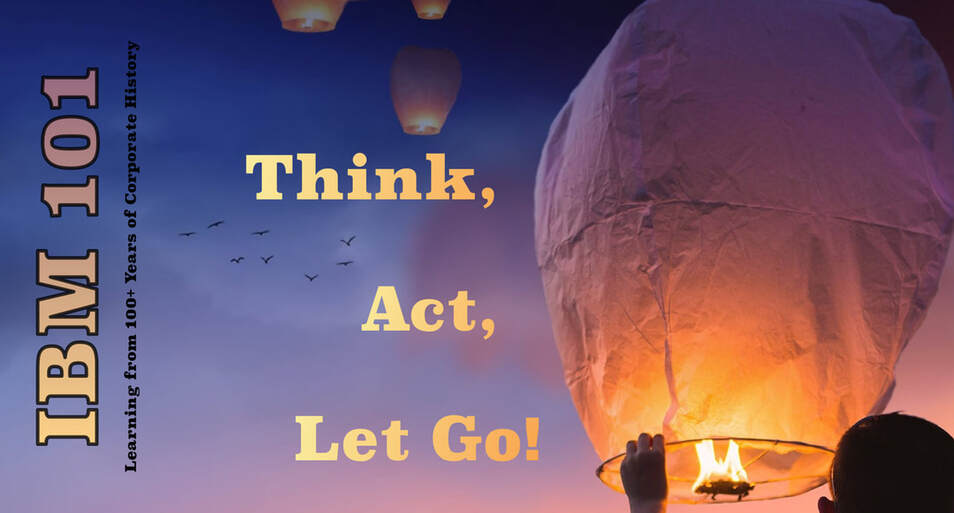 ​Watson Sr., the traditional founder of IBM, is well known for his corporation’s century-old, one-word imperative. Desk placards, wall posters and overhead signs instructed employees to THINK. THINK was imprinted on custom leather notepads, notebooks and briefcases. The external corporate magazine that the world associated with IBM for decades carried the brand THINK, and on the cover of its first issue was The Thinker by Rodin.

This one-word message was translated into every language conceivable, and eventually, analysts, customers and cartoonists considered it synonymous with IBM. Although Tom Watson Sr. encouraged his employees to Think and Act, it would be his son that would kick in the afterburners on the corporation.

Think, Act, Let Go!
To Grow a Business: Think, Act, and Let Go
The Path of the Entrepreneurial Father: THINK and Act!
"THINK! Directly opposite was the luminous and inspiring phrase: We Forgive Thoughtful Mistakes! After reading the lines of these two laconic declarations no man of the IBM pay roll can come to any conclusion other than that Tom Watson wishes to instill, namely: Put your mind on the job, express your convictions; make errors occasionally; hit a rock and remember where it was located in your path. And the next trip sail onward to your anchorage."

This was Watson Sr.’s formula for success: THINK, ACT and don’t make the same mistake twice.

During the Great Depression, Watson Sr. did not have the capital to invest in his culture. Instead, he invested his time; he maintained a constant focus; and he delivered a consistent, memorable and superlative message. But IBM would eventually reach a point beyond which it could not grow with the “old man” at the helm. As the traditional founder of IBM, he found it impossible—like so many entrepreneurs—to completely let go. All major decisions of thought and action still flowed through his corner office.
​
When Watson Sr. died in 1956, Watson Jr. faced a decision. His father was one of the world’s most recognized corporate, philanthropic and humanitarian figures. His father counseled presidents, walked with kings and queens, and every employee knew what this lone figure had accomplished for their company, their country and their fellow man.

​One route would have been to continue along his father’s well-proven path.
The Path of the Constitutionalist Son: Let Go!
The son, though, was in one respect unlike his father.

​Although—like his father—he loved the company, he did not wish to live for it.
To encourage independent thought, embolden individual action and enable decentralized decisions, he founded a guiding corporate constitution on three words: Respect for the Individual, Service to the Customer, and the Pursuit of Excellence.
Thomas J. Watson Jr. took his father's path as far as it would take him and then extended it. He fully unleashed a power source that his father only partially tapped: human potential empowered by a decentralized company.
Return to Corporate 101 Articles Home Page