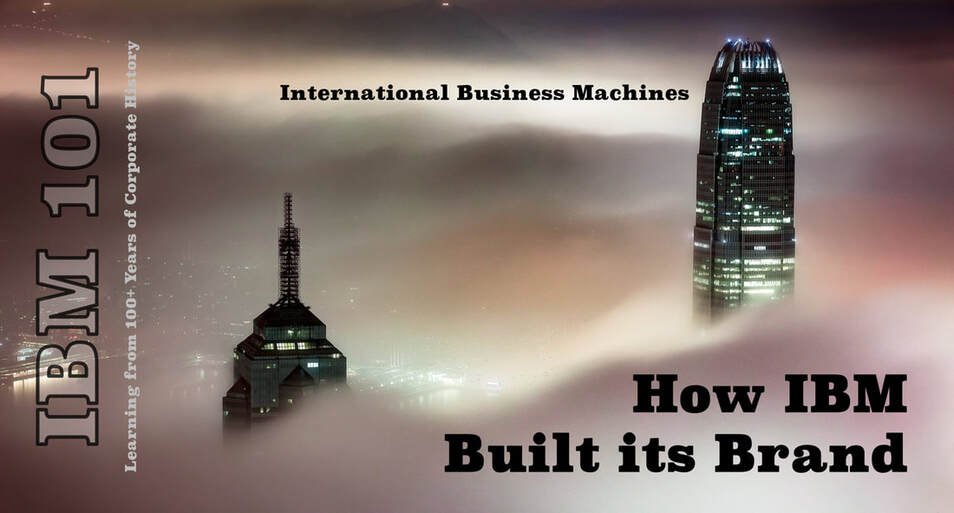 ​The country needs more engaged chief executive officers driven by the qualities highlighted below: wisdom, character, courage and who are habitually courteous and always thinking.
How IBM Built its 20th Century Brand
An External Corporate Brand Built on Internal Employee Character
Without historical precedent, Chief Executives often led by the seats of their pants. They relied on their instincts and adapted their actions through trial and error.
​For the long-term success of his corporation, he was not focused on the externals of a person but the internals.
Internal Qualities Not Blue Suits Built IBM’s External Brand​​​
In a day when salesmen were seen more as ruffians than businessmen, IBM had to fight for corporate legitimacy. History records well the corporation’s earliest fascination with blue suits, white shirts with stiff collars, ties and wing-tip shoes. Personal appearance was important. Tom Watson told his employees that first impressions were important but that, although appearances were important, no successful businessman came in a pre-determined package of physical characteristics.
​
In 1932, he described to the Freshman Convocation Class of the NYU School of Commerce his expectations of the external wrappings of a businessperson.

He [a businessperson] may be tall or short, corpulent or slight of build, old or young, handsome or homely. In short, they may be almost anything so far as externals are concerned. … to ascertain what constitutes a successful businessman, we must take him apart and find out what makes him tick.

Although external appearances were important, the chief executive focused on what made a person “tick” because after the first impression wore off, it was the individual’s internal qualities that solidified the customer’s initial perception. A blue suit and white shirt may have opened the door, but a positive customer relationship was the substrate of a long-term, highly profitable relationship, and such a relationship opened doors to other customers.
​
Most historians have gotten Watson’s focus on attire wrong since it seems all too true that descriptive, drama-filled narratives interest readers more than an individual’s lifetime pursuit of balance. At Watson Sr.’s funeral the minister eulogized the chief executive’s lifetime outlook on appearance:​
​The truth came to him simply—he believed clothes don’t make the man, but they assist the gentleman.
​​Rev. Dr. Paul Austin Wolfe, Brick Presbyterian Church minister
IBM’s 20th Century priorities were always on an individual’s internal qualities. These qualities just happen to show up on the customer’s doorstep packaged in a distinctive blue suit. Over the course of the Great Depression, in speeches and writings, Watson Sr. defined the hallmarks of those who built his corporate brand. He focused on internals to achieve an external result.
​
These are a few of his thoughts on what he considered important qualities:
Character should never be confused with reputation. It is not a matter of externals. It is a thing of moral fiber—of moral strength or weakness. It is what you are. … Closely allied to character we find courage. I do not refer to physical courage, but to that finer quality—moral courage. This attribute, without which a man cannot get very far in life, impels him to do the right thing, when it should be done … no matter … how much his physical being shrinks from the task.
​Thomas J. Watson, “The Earmarks of a Businessman,” 1932
​You men never had a successful experience in your life with a workman who did not have good manners. The fellow that is always rough and doesn't show you the consideration and the courtesy to which, as foreman, you are entitled, is not the kind of man you want in your department. You need the kind of men who are gentlemanly and courteous …
​
… Of course, we must always set the right kind of example ourselves as to character and good manners.
​Thomas J. Watson Sr., One Hundred Percent Club speech to factory foreman, 1933
Expecting courtesy almost seems like a yesteryear’s quaint quality. Yet five decades after Watson Sr. told his foremen to consider courtesy on par with character, Peter F. Drucker wrote quite eloquently in his seminal book Management:

Bright people—especially bright young people—often do not understand that good manners are the “lubricating oil” of an organization. … It is a law of nature that two moving bodies in contact with each other create friction. Two human beings in contact with each other therefore always creates friction. … manners are the ‘lubricating oil’ of an organization.
​
​As Watson Sr.’s organization grew, he knew that courtesy got a thing done. Watson Jr. embedded this concept into one of his basic beliefs—respect for the individual. If an organization of a few hundred, a few thousand, or a few hundred thousand is to move forward it takes respect and courtesy to control the passions flamed by personal ideas and precious ideals.
Without wisdom, knowledge is useless. Wisdom is the power that enables us to make practical use of our knowledge.
​Thomas J. Watson Sr., IBM Sales School, 1932
​​Watson believed that knowledge that wasn’t applied was useless. He wanted his employees to strive for wisdom—that understanding derived from applying knowledge and experiencing the results. He encouraged and emboldened the individual’s pursuit of wisdom by forgiving thoughtful mistakes. He told his employee-owners that the only person that does not make mistakes is the person that does not try anything.
No man ever attained greatness who did not think for himself.
​Thomas J. Watson Sr., Freshman Convocation at NYU, 1932
Inspire Employee Character to Build a Brand
Such executives can set the example in this new century for their employees who will follow suit to build the 21st Century’s new brands.
​In the 20th Century, IBMers were the internal character of their corporation, and they found their external reflection in their customer’s eyes. When a corporation’s customers have on-going, long-term, consistently positive experiences with a corporation’s internal character—its moral fiber, then the corner office has built a lasting brand.

Watson Sr. may have started the journey but, as he hoped, his employees finished it.