A Review of the "Autobiography of Andrew Carnegie" 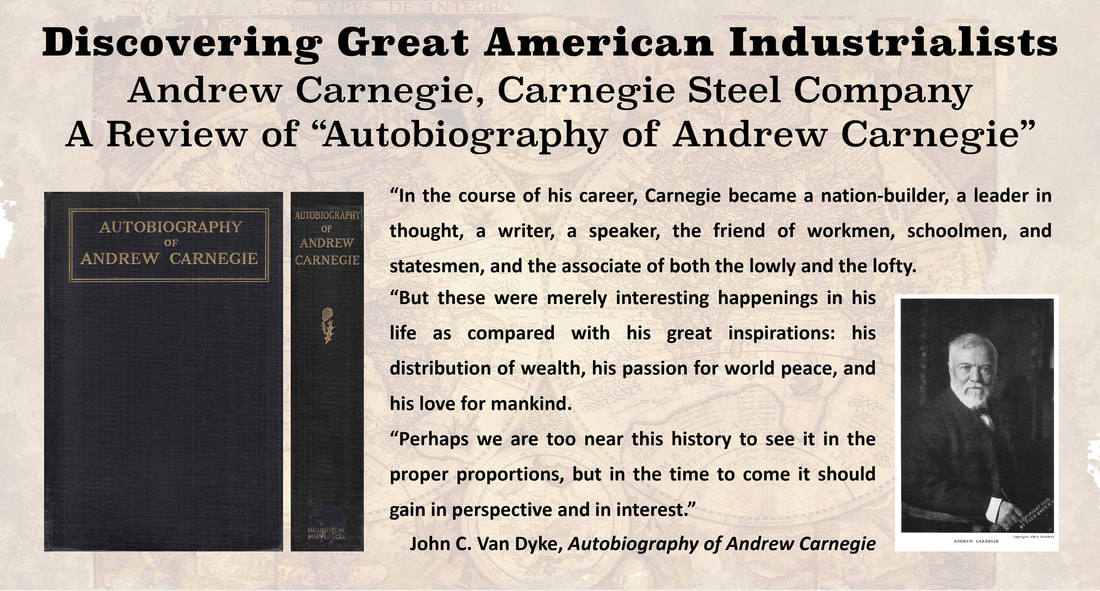 “Andrew Carnegie established a gospel of wealth that can be neither ignored nor forgotten and set a pace in distribution [of that wealth] that succeeding millionaires have followed as a precedent. In the course of his career, he became a nation-builder, a leader in thought, a writer, a speaker, the friend of workmen, schoolmen and statesmen, the associate of both the lowly and the lofty. But these were merely interesting happenings in his life as compared with his great inspirations – his distribution of wealth, his passion for world peace, and his love for mankind.
​
“Perhaps we are too near this history to see it in proper proportions, but … [Maybe] the generations hereafter may realize the wonder of it more fully than we of today.”
John C. Van Dyke, Editor’s Note, Autobiography of Andrew Carnegie
A Review of "Autobiography of Andrew Carnegie" edited by John C. Van Dyke
Reviews of the Day: 1920–21
“Andrew Carnegie will always live as the founder of the libraries for the people which bear his honored name. His first desire was for the diffusion of knowledge, and the betterment of democracy. And just as the future seemed brightening all around him, the war [World War I] came, and broke his heart. …

“The war shattered his hopes. It made him an old man at a blow [He was almost 80 at the time]. He saw hatred where he had looked for love, universal destruction where he had dreamed of the harvest of peace. For him it was the end of all things.
​
“But his work lives after him, and an example such as will never fail to inspire the hearts of men.”
W. L. Courtney, “Books of the Day,” The Daily Telegraph, January 21, 1921
“In every way ‘The Autobiography of Andrew Carnegie’ deserves a place among the great human documents of American literature, while its inspiration and wide range of appeal will make it of profound interest to readers who do not ordinarily enjoy autobiographies.”
“Forty-Three New Books,” The Santa Ana Daily Register, December 23, 1920
Observations of Andrew Carnegie from Autobiography of Andrew Carnegie​​
​This Author’s Thoughts on Autobiography of Andrew Carnegie
Autobiography of Andrew Carnegie is a wonderful self-written biography—full of life, hope and introspection. As Mr. John C. Van Dyke writes in his editor’s note, the editor has done little more “than arrange the material chronologically and sequentially” so that the narrative might run on unbrokenly to the end. Mr. Carnegie produced several books on his own and was extensively published in newspapers and magazines. He was a premier writer in his own right.

This is Andrew Carnegie writing about what is important to him and should be read in conjunction with Burton J. Hendrick’s The Life of Andrew Carnegie. The three chapters in the autobiography that stand out are, “The Homestead Strike,” “Problems of Labor,” and “The ‘Gospel of Wealth.’ ”
​He implemented a sliding scale so that his employees would share in the profits when times were good, but also provided for a “minimum wage” (Yes, he called it a “minimum wage.”) that sheltered his employees when times were bad for the industry as a whole.
​Carnegie wrote the following to highlight how the sliding scale worked:

“It was a sliding scale based on the price of the product. Such a scale really makes capital and labor partners, sharing prosperous and disastrous times together. Of course, it has a minimum so that the men are always sure of living wages.”

Wikipedia details are all too often shallow, weak and subjective. This is dangerous for a democracy that depends on an intelligent and informed populace. Wikipedia information should be used as a starting point for research—not an end-all resource for informed decision making. The information provided on Wikipedia for the Homestead Strike is a case in point.

​Read the chapters concerning this strike in these two books—this autobiography and B. J. Hendrick's biography, and then read Wikipedia – you will understand.   . . .