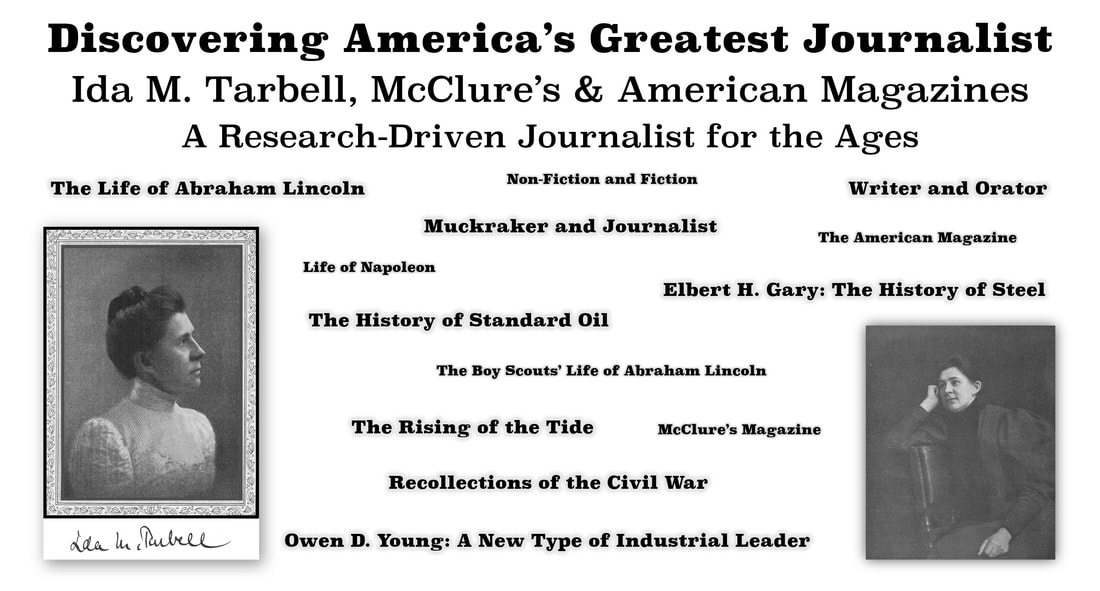 ​In my on-going research of Thomas J. Watson Sr., traditional founder of IBM, I found an exchange of letters between him and Miss Tarbell. She was inquiring about the percentage of women that were employed at IBM. Watson Sr. replied promptly with all the latest statistics that would make one think that the information was stored in an Excel spreadsheet awaiting her inquiry rather than a mechanical tabulating machine that would have required feeding punch cards to sort, consolidate and then print.

That led me to ask, "Who is Ida M. Tarbell?" Her name sure rang a bell. For several years now, I have gathered her books and become addicted to her writing style, her sense of justice, her wonderful desire to seek information at the source, and her outspoken stand for—not what others believed—but for what she believed. This article and the reviews of her books are the result of that reading.

Tom Watson invited her to the office in his reply with the information he provided. I wish I could have been present to hear that conversation. I am sure that Watson Sr. would have asked about her personal impressions of Elbert H. Gary, Owen D. Young, John D. Rockefeller Sr. and so many others that she interviewed and wrote about in her long journalistic career.

​An amazing woman. An amazing human being.
An Overview of Ida M. Tarbell and Her Works
A passage in Owen D. Young: A New Type of Industrial Leader expresses her frustration with being typecast in such a negative role. She closes the foreword with, “I have never been one who felt that the praise of him you believe to be a good man is a shame to a writer, any more than I have felt the condemnation of a man you believe evil is a particular virtue in a writer.” She called the concept of muckraking “stupid.” She felt that the profession eventually replaced a “passion for facts” with a “passion for subscriptions.”

​But as the passage of time has shown, when Miss Tarbell captured, evaluated and wrote down her facts, she searched—not just for the worst in humanity—but also for the best. She believed it was her job to do both, and (as shown in the footnote) McClure’s Magazine’s subscriptions were the better for it. [See Footnote #1]
​​Information spoke to her like few others of her day as she journeyed by train, canal barge, horse-drawn and horseless carriage to remote, small townships to decipher handwritten scribbles filled with misspellings.
Ida M. Tarbell wrote from the Paris Peace Conference held after World War I the following about those she observed from the press who did not meet her standards:

​One of the banes of the Paris Peace Conference was that there were so many men and women on the field under contract to write, to produce so many words every day or every week. There was no contract that these words should add something to the knowledge of the many things  about which it was so necessary for men and women to learn—no contract that they should contribute by ever so little to the great need of control on every side, that they should comfort, soften hates, stimulate common sense.
​
Writers covered up their ignorance of things by doing prophecies, by shrieks of despair, by poses of intimacy with the great, by elaborately spun-out theories. They built up superstitions. They created things—absolutely created superstitions that may never be dispelled from the minds of those who read them back home.

​Sound all too familiar? Hits too close to home, doesn't it? Do not despair; be forever hopeful; there is more to America than a superficial “passion for clicks” achieved through debasing and highlighting the vile.

Now for her autobiography: "All in the Day's Work."
A Review of "All in the Day's Work" the Autobiography by Ida M. Tarbell
​​A tremendous read for any woman or man interested in finding yourself in life and society. It comes with its turmoil. As for myself, may I write about human beings and its leadership as eloquently as Miss Tarbell. She is a tremendous example of respecting and growing one's talent.
Ida Tarbell added to the sum knowledge of mankind. She found balance in her articles. They stimulated discussion, thought, and common sense based on facts not hatred or superstitions; she, during her lifetime, wrote to enlighten her fellow mankind.

Fundamentally, she wrote to make the world a better place.

I hope you enjoy her works as much as I have.

They have made me a better person.
​
Cheers,

​- Pete
[Footnote #1] Ida M. Tarbell’s “Life of Napoleon” began in McClure’s Magazine in November 1894 and finished in April 1895 and was called by the magazine, “the most successful feature—by far. … Rarely, in all the course of magazine publication has there been a success equal to it.” It was surpassed a few months later by the “Early Life of Lincoln.” Ida Tarbell’s first article on Abraham Lincoln added more than 40,000 new subscribers within ten days of publication, and by the release of her third article, the series added a “clear increase” of 100,000.

​This raised McClure’s Magazine’s subscriber base from 150,000 to 250,000 in just three months. Her series the “Life of Lincoln” started in November 1895 with “Abraham Lincoln” and appears to have ended with “Lincoln’s Funeral” published in September 1899.
Return to the ida M. Tarbell Home Page