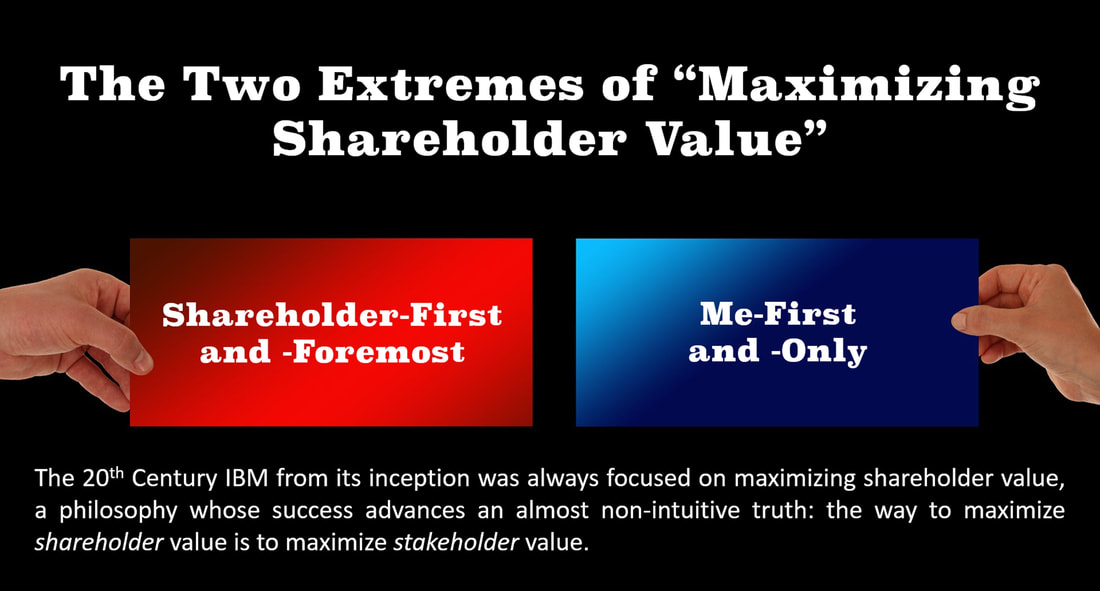 Who are a corporation's major stakeholders?

​The four major stakeholders in a corporation are customers, employees, shareholders, and their shared societies: (1) customers dedicate time, energy, and money to implement products; (2) employees exchange loyalty for rewarding careers; (3) shareholders invest for a return; and (4) society distributes the tax dollars of the first three to maintain legal systems, repair and improve infrastructures, and maintain social stability, which the business needs to optimize profits and operate in peace.

IBM’s history reinforces the fact that it isn’t necessarily the pursuit of maximizing shareholder value that is wrong, but that it is possible to take a wrong path in reaching for the goal.

​Two of the wrong paths so evident with the 21st Century IBM are shareholder-first and -foremost, and me-first and -only
Introduction to "The Rometty Edition" of THINK Again!
​Introduction to THINK Again!: The Rometty Edition
An Invitation to THINK Again
​​​Thomas J. Watson Sr., the traditional founder of IBM, is well-known for his corporation’s century-old, one-word imperative; desk placards, wall posters, and overhead signs instructed employees to THINK.
​Thoughtful individuals are questioning the concept of maximizing shareholder value and its impact on a corporation’s stakeholders: its customers, employees, shareholders, and the societies they cohabit.
​
​If Watson Sr. were alive today and asked to comment on IBM’s current executive strategy of maximizing shareholder value, he would look at the data, establish the facts, evaluate IBM’s current performance, extrapolate its possible futures, and say, “It is time to start thinking again.”
The Extremes of Maximizing Shareholder Value
In 1956, THINK Magazine clearly defined IBM’s stakeholders with the adage, “Business exists to provide a service to MAN—service to consumer man, to worker man, to investor man, and to the community of man.” To understand the extremes of shareholder value, it is necessary to walk in these men’s shoes. Doing so makes it easy to identify two extremes of shareholder myopia: a nearsighted focus on shareholder value to the exclusion of all else (better referred to as shareholder-first and -foremost) and the influence of individual greed under the guise of maximizing shareholder value (better called me-first and -only).

​While we must be watchful of opposing extremes that could discourage capital investment in an economy, it is also necessary to be concerned with these out-of-bounds philosophies because they are prevalent.
Resisting the Extremes
​Today’s shareholders would call his returns stellar, not attractive. In sixteen years, the number of shareholders grew by 2,000%.
​
Sometimes during periods of economic duress, social conflict, or natural disaster, the needs of the business—or one of the stakeholders—outweigh the needs of all others. There are examples in IBM’s history of employees sacrificing for the sake of their shareholders; shareholders providing money to rescue the corporation; customers giving a trusted vendor time to deliver the right technology; a chief executive officer reducing his commissions to provide employee benefits; and society defending the principles upon which the business and the country were both based. During such times, open communication between stakeholders ensured that individuals understood the necessity of any temporary imbalance, a discussion driven by IBM’s greatest chief executive officers.

These leaders understood that each stakeholder was invested in the corporation in their own way: customers dedicated time, energy, and money to implement products; employees exchanged loyalty for rewarding careers; shareholders invested for a return; and society distributed the tax dollars of all three to maintain legal systems, repair and improve infrastructures, and maintain social stability, which the business needed to optimize profits and operate in peace.

IBM’s history reinforces the fact that it isn’t necessarily the pursuit of maximizing shareholder value that is wrong, but that it is possible to take a wrong path in reaching for the goal.
Capitulating to the Extremes
Now another set of IBM CEOs has lost sight of the best path. They have followed two five-year roadmaps with the express vision of maximizing shareholder value. A decade and a half of data proves these roadmaps used the wrong guideposts. Since 1999, IBM’s measurements of productivity have been flat or in decline, and have fallen precipitously behind its competition. It is, once again, relying on financial engineering, and its habitual investment in paper is overriding the long-term necessity of a business to make people more productive, processes more effective, and products more valuable.
Greed, not Profit, Increases Risk
It is the obligation of capitalists who understand how tenuous the bond is between economic and social systems to stand in opposition to all destructive philosophies, and to stand especially strong when capitalism takes on self-destructive tendencies. They must support a system of checks and balances between their economic and social systems because greed will not only destroy a properly functioning economic system, it will betray its supportive social system.

​Greed, it could be argued, is the unifying thread in Winston Churchill’s statement comparing capitalism and socialism: “The inherent vice of capitalism is the unequal sharing of blessings. The inherent virtue of socialism is the equal sharing of miseries.”
Democracy is a rowdy social system for discussing such inequities. When its system of checks and balances is in operation, it isn’t always the most beautiful conversation to behold—especially when the combatants show little respect for each other. But until we discover a better way, the best combination of political and economic systems is democracy and capitalism because they both place responsibility for action on the individual.​
Return to THINK Again! Information Home Page