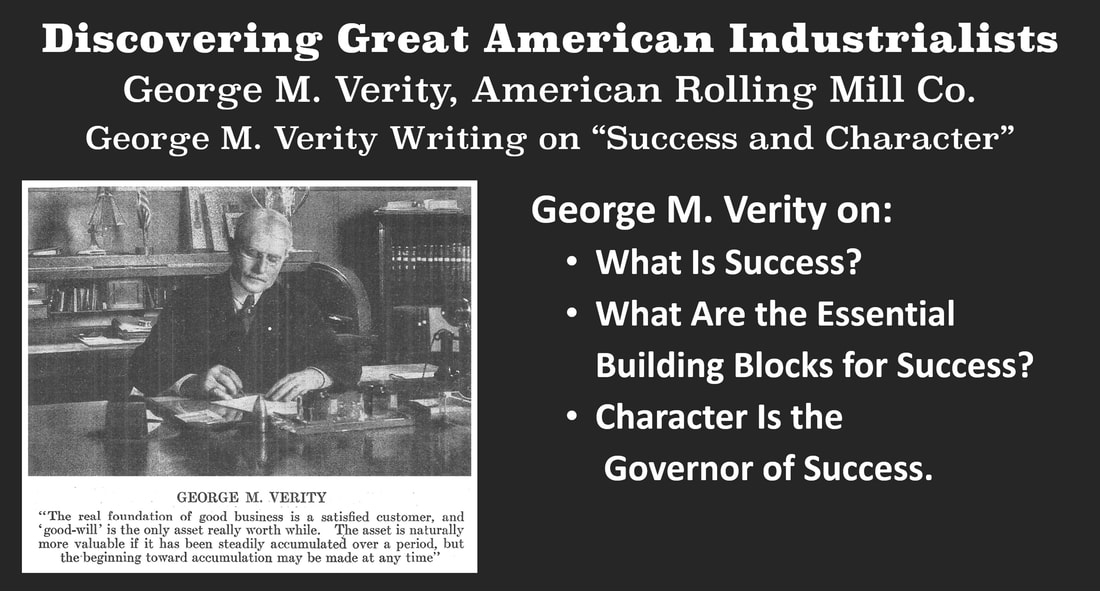 Success is the greatest test of character. Some can stand very little success, others a great deal, but the history of the lives and accomplishments of men give much evidence to prove that almost every man has a limit to the degree of success that he can attain without losing control of one or more of the factors or powers that have made him successful.
​
The world needs men who can stand success and who, when they have found it, will use it in the interest of mankind.
George M. Verity on Success and Character
[All heading and subheadings have been added by Peter E. Greulich. Some passages have been deleted for clarity or shortened for brevity. Care has been taken to maintain the author's original thought in these modifications.]
​George M. Verity on Success and Character
Success and Character
Character and success are so thoroughly interwoven, so essential to each other, that where you find one you are likely to find the other. There is, however, one great difference between them, and that is, that one may possess high character without having been fully successful …
What Is Success and What Are its Essential Building Blocks​
No man can hope to be rated as a success unless he has made good in all the relations of life that have come to him, and in the responsibilities of citizenship. This is a task that will keep a man busy every day of his life.

The duties and responsibilities of citizenship are today so complex, so varied, and so numerous, and the demands of modern business are so exacting that a young man just starting must take up the work of life thoroughly prepared, fortified, posted, and trained, if he is to hope to be rated as a success when his work is done.
​
- Work Is a Joyful Necessity
​"Work is not man’s punishment, it is his reward and his strength, his glory, and his pleasure."
​
However, work—hard, persistent, conscientious work—will not, of itself, bring success without intelligent and well-directed effort. To be effective and efficient, a man must have the motive power of ambition and determination, and the perfect working parts of a sound mind and body.

He must understand the art of diplomacy, and he must have the desire and the ability to be considerate of others when deserved. He must have the forcefulness and effectiveness, and the balance that comes with knowledge and training and the control of character. If one starts out in life with the determination to succeed in the fullest sense of the term, he must first of all be honest—honest with himself, honest with his employers and his associates, honest with his employees, honest in thought, word, and deed.

He must be courageous, ever ready to do not only the part assigned him, but to take advantage of every opportunity to serve his employers and his associates whether it is in the line of his regular duties or not. He must constantly add to the sum of his knowledge and experience in order that he may increase his power and efficiency.

Young men should understand the importance of making good in each period from boyhood on—at school, at college, or in whatever situation they find themselves. They should start out with the determination to make good in their first position … and be satisfied to let the next position take care of itself. It is a great handicap to be yearning for tomorrow’s work, or for next month’s, or next year’s work, to the detriment of the work of today.

Each place well filled is a rung in the ladder that must be climbed. Serving an apprenticeship faithfully and successfully is building a sub-foundation soundly. An ability to perform, to do things, is not only the best asset, but it is the only one that the ups and downs of the world cannot take away. It is that which gives real standing among men.

Other qualifications that make for success are hopefulness, optimism, loyalty, enthusiasm, fearlessness, sobriety, perseverance, and consistency.

- Hopefulness, Loyalty, Enthusiasm, Perseverance and Consistency
As to loyalty, there is something in the very sound of the word that rings true like a precious metal.  One of the greatest elements of success is loyalty to your friends, to your associates, and to the business with which you may be connected, loyalty to your principles, to your faith, and to your citizenship.
​
Undertakings or accomplishments, great or small, are seldom brought to a successful conclusion without great enthusiasm. It is sort of a wellspring of activity, a full-charged battery that keeps the nerves tingling. However, mere enthusiasm unsupported by consistent, hard, effective work is like a beautiful bubble and is of absolutely no value. Fearlessness to do the right as one sees it, can be as great a protection to the businessman of today as was the coat of mail to the knight—errant of yesterday. Both a lion and a coward will flinch before genuine courage. …

Perseverance is indispensable to success—that real bulldog determination, undismayed by obstacles or handicaps of any and every kind, by time or tide—is a necessary companion to that sort of work that wins. The race is not to the swift, neither is it to the strong, nor to the man who has the power of knowledge. It is rather to the consistent, persistent, determined man, who, fortified day by day with increased knowledge and experience, never gives up until he has reached his goal. No man who is at the top of the ladder ever reached it with one bound. He has worked and worked hard, has taken step by step carefully, sanely, and with confidence in his endurance.

Perseverance is described by a noted writer as energy and invincible determination: “The longer I live, the more certain I am that the great difference between men, the great and the insignificant, is energy, invincible determination—an honest purpose once fixed, and then victory. That quality will do anything that can be done in the world, and no circumstance, no opportunity, will make a two-legged creature a man without it.”

Inconsistency can spoil almost every other qualification; it undermines stability of character and reputation, and it gets you nowhere. If one would have the respect and confidence of his employer or his employee, of his customers or his friends, he must be consistent. He can neither act nor argue one way today, and another tomorrow, if either his word, his speech, or his influence is to be of value to him.

- Delayed Gratification: Time and Experience Are Synonymous
- Every Individual Has Success within Them

Every normal man has it within him to be a real force in the activities of the world if he will but use the God-given powers which he has. We must remember that failure exists only in the grave, that while there is life there is still a chance. That discouragement or inability to reach a fixed goal at any given time is not failure, it is simply experience, without which we can have no mature judgment, and that mature judgment is essential to success.
Character is the Governor of the Engine Called Success
These definitions make it clear that character is more a matter of our own building than it is of inheritance, because in a large majority of cases we have it in our power to choose our associations and to choose or create such environments as appeal to us. It is certain that our associations and our environment from childhood on, whether chosen or forced upon us, do have more to do with the development of character than any other factor or influence.

Character is the great balance wheel, the great leveling, controlling influence in life; it is to a man as is the governor to a great “Corliss” engine. Of what value would the engine be without its governor? With every part in place and in perfect working order, its power of accomplishment would, without the controlling influence of the governor, be turned into an instrument of destruction—it would be a menace to life and property the minute steam was allowed to enter its cylinders.

Character is to humanity as are the throttle and the air brake to a great locomotive. The air brake, the governor, and the throttle all make tremendous speed possible, because they provide control for an almost unlimited power, which, uncontrolled, would destroy human life and destroy property. Every power which man has acquired or with which he is endowed makes him a menace to other lives, and an instrument of destruction without the great controlling influence of character.
- Character Determines the Quality of One’s Individuality.

Individuality is the sum of those qualities and characteristics in a man or woman, of initiative, force, and ability that are peculiar to each of them.  A passive, lazy, “dough and putty” man has little individuality. Character is the quality of one’s individuality.

It is the controlling mechanism that makes one master of his powers—God-given or acquired.  Character is the sum of those qualities that are distinct from purely intellectual qualities. If you would succeed in the broadest sense of the term, you must acquire that thorough control of your mind, of your body, and of all your powers and faculties that only the possession of high character can give.

There is no lack of opportunity; on the contrary there is a scarcity of men who can do things, or who can fully make good in the various divisions of commerce, finance, and industry. I doubt if there is a business of any proportion in the country, that, at some time in the course of the year does not have a place to be tilled for which they have no one available fully equal to the need—a place where salary would not count if they could only get the right man. …

It is the constant problem of big business to find men fully equal to positions of responsibility, men who have education and training, who are masters of a particular business, or of some branch of it, and who have the many qualifications that the complex business of the times demands.
- Character Brings Recognition and Responsibility

When a young man has acquired a reputation for good character, for energy, for application, for courage, for initiative, and for the ability to do things, such a reputation cannot be hidden under a bushel, it is bound to spread. It will be known to his associates, to his friends, to his employers, and that young man will never lack for profitable employment.

Responsibility gravitates to those who are able to carry it. The carrying of responsibility commands its own reward. Business, politics, the professions, the arts, and sciences all need men who can do things, men who can make good.
- Character Is the Governor of Success

Last but not least, character, strong sturdy character, is needed to control success. The human mind, the human body, the human unit as a whole has shown itself to be strong—as is proven by the wonderful accomplishments of the ages.  But in some of the strongest of the strong, of the seemingly invincible, success has proved to be the vulnerable spot-like the heel of Achilles.

Success is the greatest test of character. Some can stand very little success, others a great deal, but the history of the lives and accomplishments of men give much evidence to prove that almost every man has a limit to the degree of success that he can attain without losing control of one or more of the factors or powers that have made him successful.
​
The world needs men who can stand success and who, when they have found it, will use it in the interest of mankind.
​George M. Verity on "Success and Character"
Return to the Industrialist Bibliography Home Page