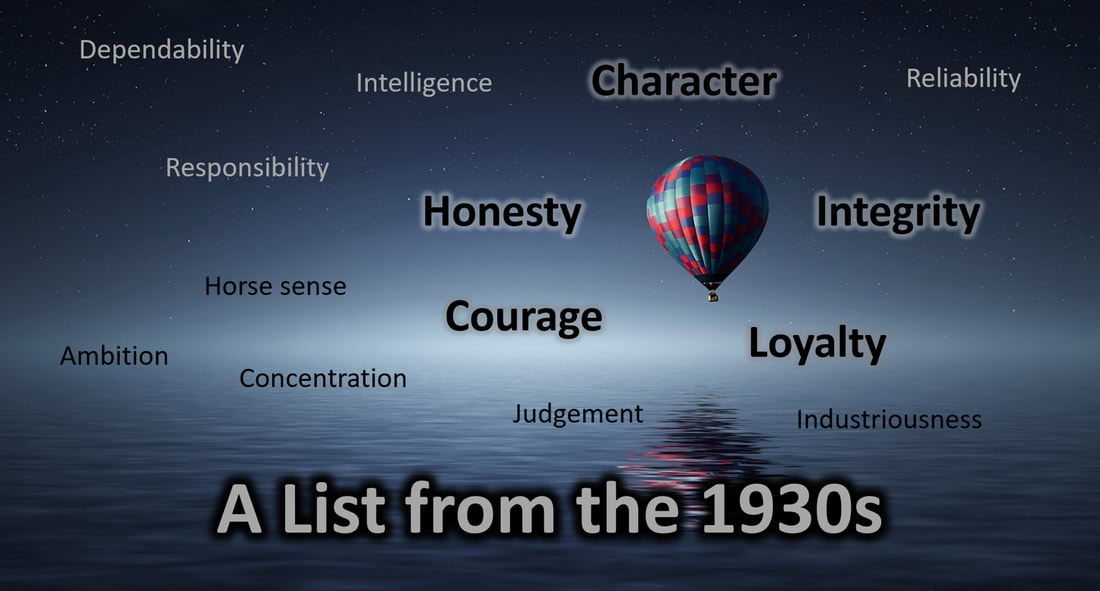 Some will say that times are different … and they are. The difference is that we don’t have a credible, recognized editor of a major business news magazine such as B. C. Forbes to ask the following question of the world’s top industrialists.

In September 1934, Forbes asked of industry’s top leaders. “If you were to name one quality which you regard as the most important, the most valuable, the most desirable of all in a person, which would you specify?”

​These were the top five.
Top Five Personal Qualities in an Employee
The Question Asked
In September 1934, B. C. Forbes asked of industry’s top leaders: "If you were to name one quality which you regard as the most important, the most valuable, the most desirable of all in a person, which would you specify?”
The Answer Given
​Those that responded were from a select group of the Who’s Who in Business. Some weren’t CEOs, but they were all recognized leaders of their day within their organizations. Today’s graduating MBAs, unfortunately, won’t recognize many of these individuals, but they should recognize the companies. Although some of these corporations have seen rough times, most survived a good piece into the 20th Century or are still around.

So, this is a list of executives who thought right.

Here are a few of the names:
These were the top five. "Character" was the clear leader.
This Author's Thoughts and Perceptions
Somehow I don't think times have changed that much in this respect, do you?

What is truly interesting is that a month later B. C. Forbes asked a follow-on question of a much larger section of the business community, “Which of the top businessmen would you like to have President Roosevelt [Franklin Delano Roosevelt - FDR] call into council now that he is turning to practical, experienced men for advice?”

One would think that these men would select a counselor for their president that exhibited the top traits from just a few weeks earlier: character, courage, loyalty, honesty and integrity. Tom Watson was included in that list of suggested counselors for the President of the United States. He eventually became a confidant for not only FDR but Eisenhower.

Tom Watson understood that employees also expected these traits, highlighted by B. C. Forbes, to be the supportive rungs for promotion up the corporate ladder. Words had to be supported by deeds of character whether it was an employee, a first-line manager, or a distant executive; but it was especially a requirement of the person inhabiting the corner office.

He said, quite clearly, that “sales morale depends first on the men [or women] at the top and is based on their knowledge of the business, their personality, their integrity and their moral character.” Character was top of his list of anyone that wanted to be a leader at IBM. That is why character was a condition of employment. Violate it and you lost your job.

No matter your title.​
Return to business articles Home Page