Let Your Guard Down 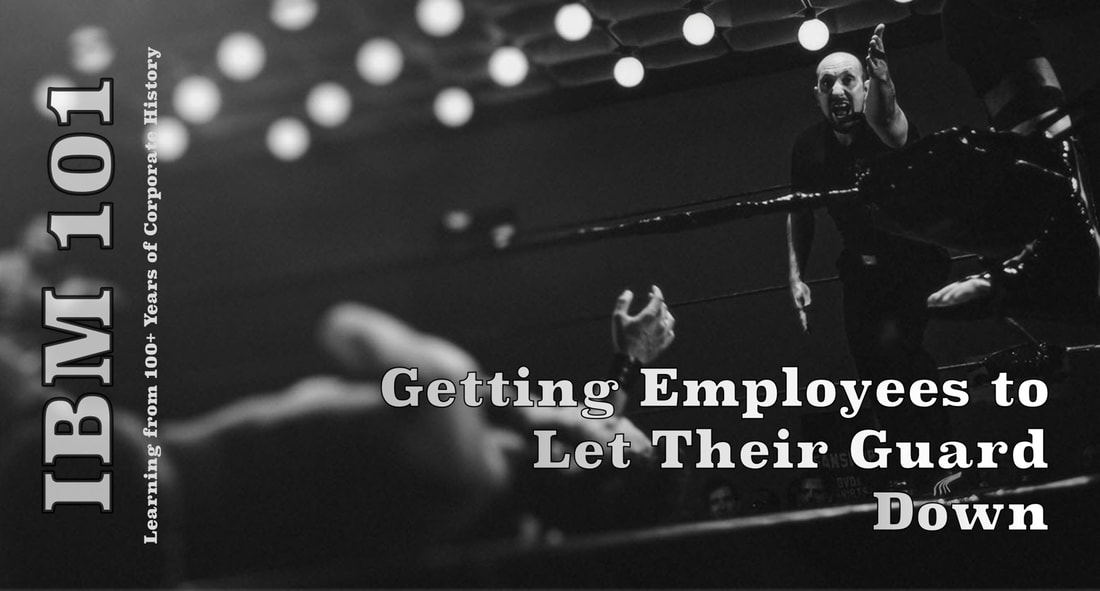 Getting a person to let their guard down is not easy. Just verbalizing the words raises a person’s defenses. It is as if the suggestion, alone, raises obstacles.

​First, a person has to consider the source. If a spectator advises a boxer—as he enters the ring—to let his guard down, the outsider probably doesn’t have the pugilist’s best interests at heart. The timing of the advice betrays a concern over a wager, not the boxer’s safety.

​Second, a person has to consider the setting. A young football player letting his guard down as he digs in to protect his quarterback is not good mental discipline; yet the same player must have the discipline—if he doesn’t want to repeat the same mistake on the next play—to hear the coach’s advice.

No matter the timing, an employee’s guard must come down to hear an executive. A true coach sets the right environment so that an employee will be most receptive to the message. To get a person to let down their guard, a consistent, predictable, and positive coaching action works best, not words.
Getting Employees to Let Their Guard Down
Coaching in Business is Tough Work
One Chief Executive Officer’s Method
​After he confirmed her thoughts, he summoned the editor and the entire THINK Magazine staff into his office—who were obviously now standing on “the other side” of his desk. He told them what needed to be done in the next issue. The editor, not realizing the side of the desk he was on, said, “But we can’t implement that idea now for the next issue. The presses are rolling at this very moment.” To which Mr. Watson responded, “Well then, stop the presses, now!”

So in November of 1943, THINK Magazine rolled out an issue more like Readers Digest with entirely self-contained articles that always continued on the next page until finished—the reader would never again be asked to flip ten or twenty pages to read the conclusion of an article. The following month, THINK Magazine carried an article by the same Ruth Leach Amonette entitled “Women in Industry.” It displayed her new title of Vice‑President, International Business Machines Corporation. She had become IBM’s first female senior executive. If any CEO ever wanted to send a clear message that providing good advice in the corner office would advance a career, Mr. Watson knew how to accomplish it.

​Setting the situation properly also ensures that diligent employees stand in their own defense. William Simmons in Inside IBM: The Watson Years writes a wonderful story about how he was (almost) fired by Mr. Watson but then promoted a few days later to Director of Product Planning.

He found himself on the wrong side of the Chief Executive Officer’s desk after a real estate agent claimed that he and another IBMer had lied about a real estate deal; when, in fact because of legal concerns, corporate had requested that the agent be kept at arm’s length. Watson Sr. looked at the two employees standing before him and said, “We have no room for such people in IBM—they are fired. Gentlemen, I’m sorry. I’m afraid you have lied to this man.”
​
While the IBMer next to Bill “appeared terrified,” Bill Simmons stood his ground. As Bill explained the circumstances, he saw the “storm front” slowly dissipate from Watson’s face. Then Tom Watson said with a small smile, “I believe you have been economical of the truth, but that is not lying.” A few days later the Chief Executive Officer promoted Mr. Simmons to his new position at IBM.​
The Chief Executive Officer Must Be a Shapeshifter
​​There are times when advice and counsel are sought; there are times when a sparring match is needed to reveal the weaknesses of an idea; and there are times when a decision has been made and it is time to move forward. If an executive hears discussion when she needs action or notices a deathly silence when he requires advice, they should ensure the employee knows which side of the desk they are on. An employee needs guidance to deliver consistent results—and consistent, predictable, positive, non-verbal prompts can set the right environment.
The Goal is to Build Trust and Confidence
​That trust is earned. It will not be given on demand.

Setting the right environment is important.

Respecting that environment is critical.
​
And great CEO’s get it.
Return to Corporate 101 Articles Home Page