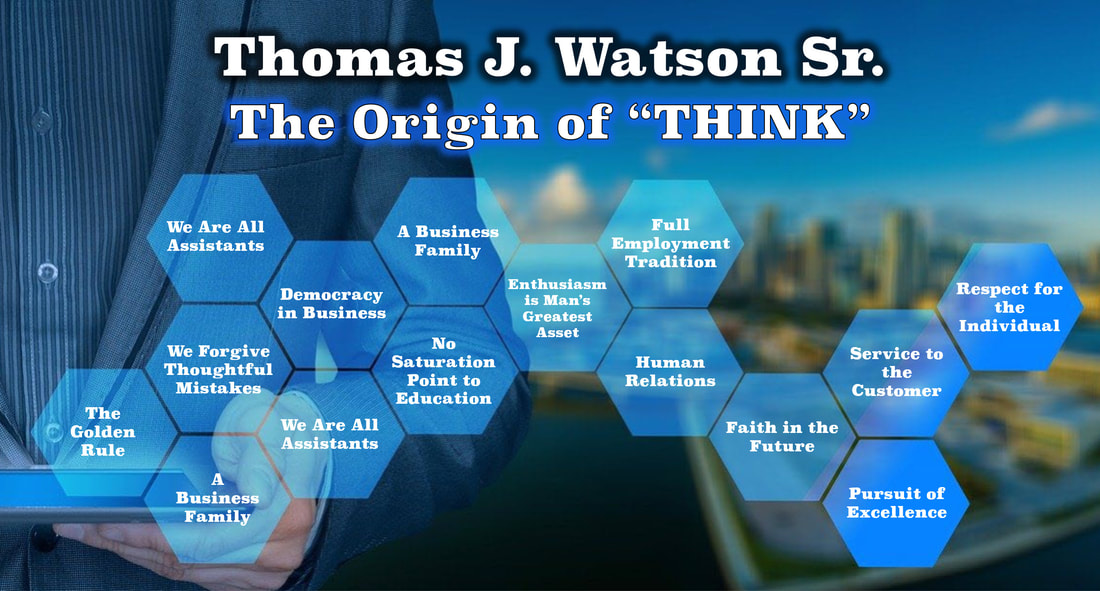 This is the origin of a story I had heard quite often at IBM. But I had never read the original story behind the legend as told by an individual who was present at the meeting when the motto "THINK" came into being.

Lee Olwell, the future publisher of the New York Evening Journal was present. He describes it as a cold, rainy morning and just "another normal weekday meeting" of National Cash Register's (NCR) sales and advertising executives. ​Maybe because of the chill in the air there was a dearth of ideas, when the new general manager [Tom Watson] took charge. It was the humble beginnings of what would become one of most recognized one-word slogans of any 20th Century Corporation.

Mr. Olwell, relates the story of T. J. Watson's "THINK."
The Story of Tom Watson's Motto: "THINK"
For four or five days in the early part of December, the weather had been vile - rainy, misty, cold, damp, foggy, gloomy. Every morning at eight o'clock the sales and advertising executives of the National Cash Register Company gathered for their daily meeting.

"Knowledge is the result of thought, and thought is the keynote of success in this business, or in any business.

"Any man on the selling force today could make two dollars where he now makes one, if he would but THINK along the right lines.

" 'I didn't think', has cost the world millions of dollars."

He went on for about ten minutes, lashing us - as well as himself. Sentences rippled like a prize-fighter's fist against a punching bag. He was standing beside one of the "blackboards" introduced and made famous in business by John H. Patterson, and without which no office or meeting room in the NCR plant was complete. He summed up his remarks something like this, "The trouble with us, the trouble with the agents, the trouble with everybody, is that we don't" - and then turning to the blackboard he wrote with blue crayon the word THINK."

There, staring at us from the platform, were those five big blue letters: T-H-I-N-K.
Another said, "I suggest that every man in this room put one in his office." From another came, "I suggest that we have an editorial written for the NCR Weekly, headed with the word, 'Think'." Some one else said, "I suggest we send 'Think' placards out to all the agents." Plenty of thinking then. All these suggestions and many more were carried out.
​
In almost no time there was in every office in the plant a framed placard with just the word "Think" printed on it. One of these occupied the most prominent place on the walls of Mr. Patterson's office. For all I know, they are still on the NCR office walls. I know they are to be found in the offices of many executives of other businesses throughout the world.

Maybe it was the rainy weather that had the rest of us "Thoughtless." I don't know. But our non-thinking must have moved T.J. himself to THINK that morning, and his thinking moved some one else to make a good suggestion.

For that suggestion many men in many situations in many places have to thank "T.J."
Return to the Thomas J. Watson Sr. History Home Page