There are two industry measurements of patent leadership: quantity and quality. The industry so far has been focused on the former. It is time the latter gained more attention. These are the two types of patent measurements:


Patent quantity, patent quality, and other patent information is available at IFI CLAIMS Patent Services: [here].
IBM's 21st Century Patent Leadership
Introduction to IBM's Patent History
There is no taking away IBM’s decades of patent leadership from those who are responsible for moving ideas into the realm of patentable, revenue-producing offerings. Patents have been important to IBM since its founding.
In comparison, in 2020 alone, IBM applied for 7,772 patents and was granted 9,138 patents.

It is a proud history, but change is on the horizon.
Three Decades of IBM Patent Leadership Is Being Challenged
In 1992, Japanese companies had owned the first-place patent position for a decade. IBM was in a distant sixth place, but the next year it jumped from sixth into first place. It has not relinquished this first-place position since. This leadership position has been maintained by the individuals who worked for four separate chief executive officers: Louis V. Gerstner, Samuel J. Palmisano, Virginia M. Rometty, and Arvind Krishna.

This is an amazing performance turned in by the corporation’s worldwide team of engineers, architects, and developers, but a change of leadership may be on the horizon; because . . . as can be seen in the chart below, since Arvind Krishna assumed the corner office, patent production has fallen by 6% in 2020, 18% in 2021, and almost 60% as of October 2022.

A New Patent Measurement Makes its Mark
​In 2018, a new measurement took front and center as a measurement for a corporation's patent performance: IFI Claims Patent Services “Ultimate Owner Ranking.” Although this is still not a perfect measurement for patents, it is more effective in measuring patent ownership, efficiency and effectiveness: quality.
​
By this new, updated measurement, Samsung had in 2020 more than double the patent families of IBM: 109%. 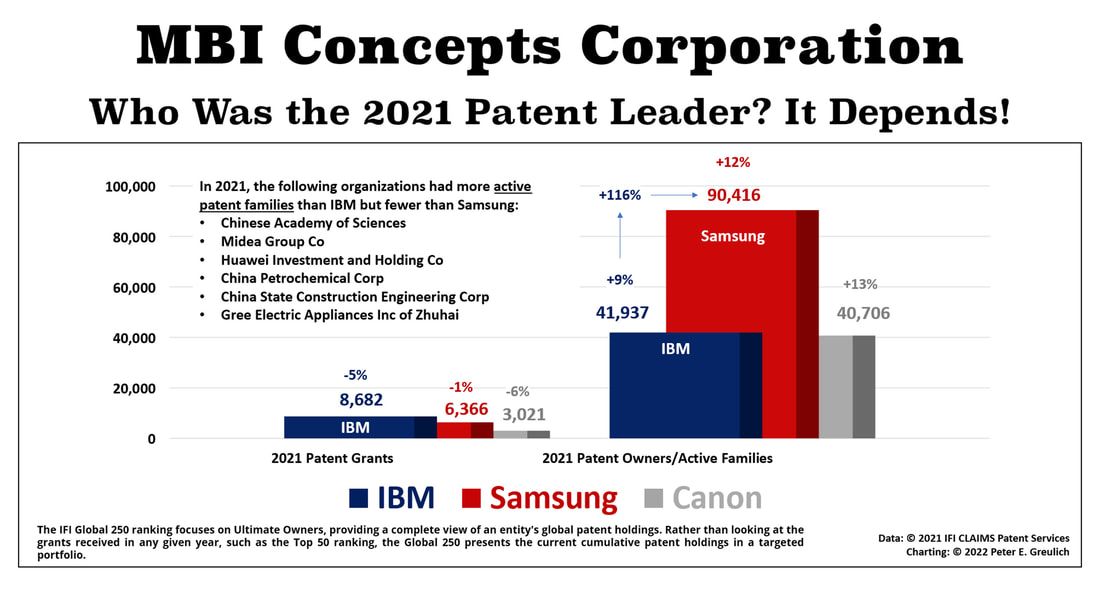 And as seen in this consolidated chart, Samsung has been efficiently growing its patent lead in the worldwide, quality measurement.

​As seen in the following 2020 and 2019 charts Samsung has been growing its lead over IBM. This is an amazing performance on the part of Samsung Corporation and its researchers and engineers.
According to this new measurement, there is a new patent leader: Samsung. Of course, it all depends on how an analyst looks at the data, or how the displaced patent leader chooses to react to it. A corporation can continue to live in the past with its old glories and churn out press releases about a less meaningful measurement, or it can analyze, adapt and change its internal processes in a pursuit of excellence.
​
This is the topic of the following articles evaluating IBM and Samsung’s patent performances.
IBM's Ultimate Owner Patent Performance
These three articles are similar. The only difference is the actual performance of the top three performers in each year: 2021, 2020, 2019, and 2018. The articles utilize the same baseball analogy to discuss the differences between two competitors, one of which has a philosophy of “putting runners on base” (IBM) and another which “drives runners across home plate" (Samsung).​
REturn to IBM's 21st Century Corporate Performance