A Review of "The Business Biography of John Wanamaker" 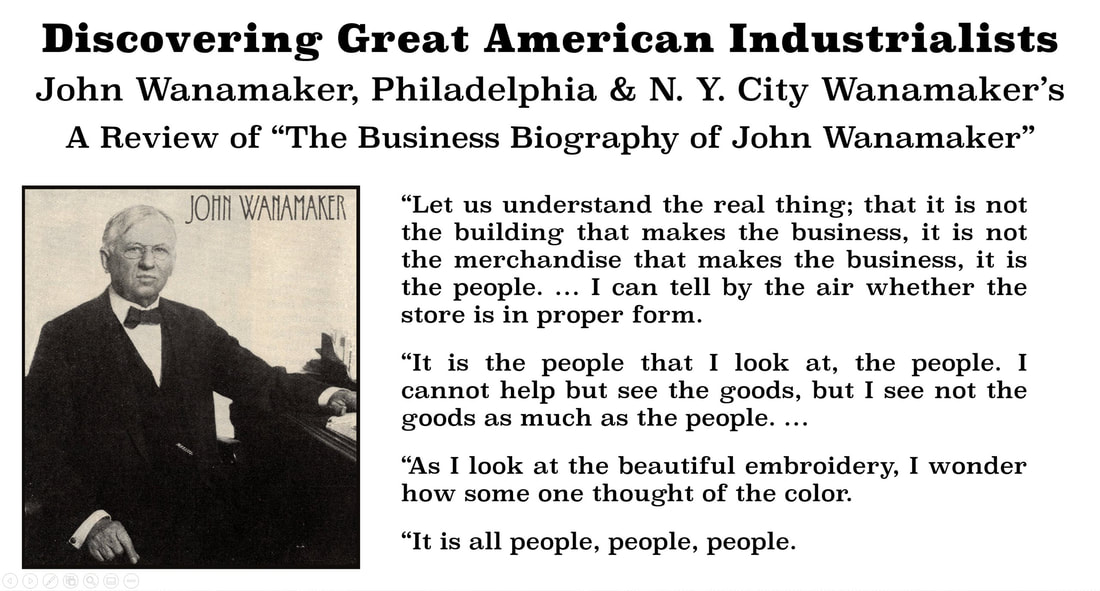 ​Before the founding of JCPenney, Montgomery Ward, or Sears and Roebuck; before Macy’s, Gimbels or Nordstrom became retailing powerhouses; and certainly before Walmart (the youngster but probably best known in this list) there was Wanamaker’s located in Philadelphia and New York City. ​Founded in 1861 by John Wanamaker many of the “firsts” claimed by the aforementioned companies were actually precedents set by John Wanamaker.
A Review of The Business Biography of John Wanamaker by Joseph H. Appel
Reviews of the Day: 1930
The Public Clamors for the Story of one of America’s Merchant Princes
​This biography about one of America’s most well-known, nineteenth-century merchants sold out in its first week. The publisher, MacMillan Company, announced a second printing and apologized for the lack of copies writing that “a second printing is now on the press.” More reviews followed the ones above:

​”Draws on the writings of Mr. Wanamaker … book is not only biographical, but also autobiographical.”
​The New York Times
Background on John Wanamaker: A Humble Merchant Prince
​​It was the Wanamaker’s Store, New York that became the center of worldwide attention as the Titanic sent out its tragic distress signal: “WE’VE STRUCK AN ICEBERG, SINKING FAST.” President Taft ordered all other radio stations off the air leaving a young man named David Sarnoff sitting in Wanamaker’s New York store broadcasting every detail about the unfolding tragedy.

​For 72 straight hours, until the last survivor was named, David Sarnoff,  future president and chairman of the board of Radio Corporation of America (RCA), future chairman of the board of National Broadcasting Co. (NBC), and eventually named the “Father of American Television”—and the New York Wanamaker’s store—were the center of the universe for the people of the world.
​A Gift for "Promotions,“ Firsts" and “Promotional Firsts.”
​​When it came to promotional firsts, Wanamaker’s was almost always out in front: wireless phone communication between the Philadelphia and New York stores, the first airplane sold by a retail merchant, guaranteeing money back on Ford automobiles during the early automobile patent fights, launching a balloon from the New York Wanamaker’s to Philadelphia’s Wanamaker’s, and displaying the fully assembled and functional “Viking of the North” on the main floor of both stores—the plane which Byrd and Bennett flew on their epic journey to the North Pole (shown below).

​When Wanamaker’s Philadelphia came to an end, its employees and those who had shopped within its walls took the opportunity to say, “Goodbye.” They knew that a good thing had come to an end. To them the store was always about family and they were losing it. Having worked for a corporation that, unlike Wanamaker’s, still exists in name but has also lost its sense of family … I understand.
​
It was a real pleasure to read a book about a man who did not shy away from his Christian heritage. Our forefathers came to our shores because of religious persecution … but did not shy away from their Christian heritage. As a country, we are accepting of other religions and mandate separation of church and state in a large part because of the Golden Rule.

​John Wanamaker ran his life and business according to this glistening guide that should help direct all of our human behavior.
Fact Checking The Business Biography of John Wanamaker
​"Philadelphia is representative. … All our municipal governments are more or less bad and all our people are optimists. Philadelphia is simply the most corrupt and the most contented. Minneapolis has cleaned up. Pittsburg has tried to, New York fights every other election, Chicago fights all the time. Even St. Louis has begun to stir and at the worst was only shameless. … Philadelphia is proud; good people there defend corruption and boast of their machine. … one man, who, driven to bay with his local pride, says: “At least you must admit that our machine is the best you have ever seen.  …

"Disgraceful? Other cities say so. But I say that if Philadelphia is a disgrace, it is a disgrace not to itself alone, nor to Pennsylvania, but to the United States and to American character."
​​So he stocked the Studebaker and the Rambler among gasoline cars, and, among steam cars, the Foster. But he was only partially sold on the idea. He wondered how he could keep his “guaranteed satisfaction” bond with customers—mechanically most of these cars still had a long way to go.
- The employees speak of their employer
"You have done more than merely supply human needs. You have gone into the homes of the people. You have looked into their minds, their hearts, into their relations with one another. You have raised their standard of living by supplying them with new comforts and conveniences, by bringing art and culture into their lives, giving them a new outlook, surrounding them with a new environment. And we change men by changing their environment."
​Spokesman for Wanamaker Store Employees, Golden Jubilee Celebration, 1911
- The employer speaks of his employee
"There is something else in business than the mere contract that binds us in each other’s service. … It has been the common practice for many years—and still is in many cities—simply to live by a bond that is written in black and white. Our bond is quite a different one: it is written in the whiteness of honor and in the redness of the fervent love in every one of our hearts. This is the tie that binds, and it is stronger than any other bond that could possibly be written."
​John Wanamaker to his employees, Golden Jubilee Celebration, 1911
- The philosophies of John Wanamaker
​
"No bargain is worth having unless it satisfies both ends of the bargain and leaves both with a profit."
​
​John Wanamaker
"Let us understand the real thing; that it is not the building that makes the business, it is not the merchandise that makes the business, it is the people. I astonished someone last week, as I said: “When I go downstairs and look around, I look very little at the merchandise. I can tell by the air whether the store is in proper form. It is the people that I look at, the people. I cannot help but see the goods, but I see not the goods as much as the people.”

"I wonder, as I look at the beautiful embroidery, I wonder how some one thought of the color.

"​It is all people, people, people."
​John Wanamaker
​It is on the thought in this last sentence,  that I will leave this book review.