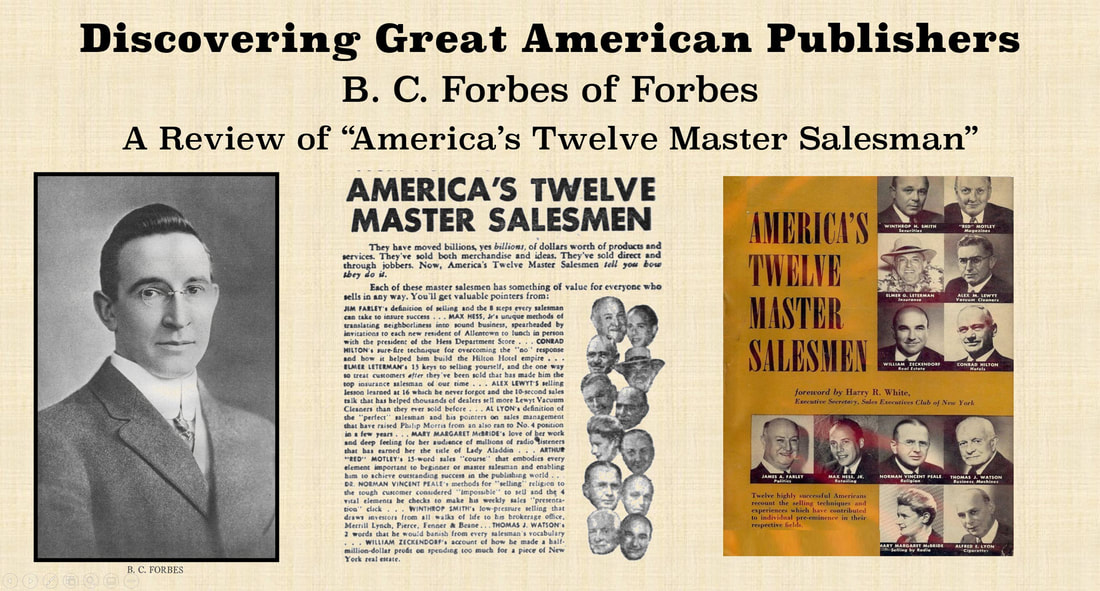 Max Hess Jr. is one of the twelve authors in this book
Max Hess Wins Man-of-the Year Honor:

Max Hess, Jr., president of Hess Brothers, Allentown has been named the 1952 “Man of the Year in Retailing.” … Mr. Hess, selected for the award because of his “outstanding contributions to the advancement of the field of retailing,” is the third retailing leader to be chosen for the annual award. … His stores, Hess Brothers, has made retailing history by doing more business than any other store in cities with populations of less than 200,000. Last year, his store did an annual volume of $17,000,000 in Allentown a city of 106,000. …
​
Typical of his progressive philosophy of retailing was the installation recently of two-way radio communication between his store and delivery trucks, the first time this technique was employed by a department store.
​The Mauch Chunk Times-News, April 25, 1952
​A Review of "America's Twelve Master Salesmen" by B. C. Forbes
Overview of the History Behind America's Twelve Master Salesman
Eleven businessmen and one businesswoman contributed to the book. They included Winthrop “Win” H. Smith [Merrill Lynch] in the securities industry, Arthur H. “Red” Motley [Parade Magazine] in publishing, James A. Farley [Postmaster General and Coca Cola, Incorporated] in politics and international business, Max Hess Jr. [Hess Brothers] in retailing, Norman Vincent Peale [Methodist Minister] in religion, Thomas J. Watson Sr. [International Business Machines] in business machines, Mary Margaret McBride [First Lady of Radio who made daytime radio profitable] in broadcasting, Alfred E. Lyon [Philip Morris] in tobacco, Elmer G. Leterman [independent agent] in insurance, Alex M. Lewyt [Lewyt Vacuum Cleaners] in manufacturing and distribution, William Zeckendorf in real estate, and Conrad Hilton [Hilton Hotels] in the hospitality industry.
​
The following is one of the reviews available when the book was published.
One Review of the Day: 1952
Paul F. Causey, "Master Salesmen's Stories," The Baltimore Sunday Sun, September 14, 1952
This Author's Thoughts and Perceptions
The review above is understandable and accurate if a person reads these vignettes looking for concrete actions to take to be a successful saleswoman or man, but if a person is reading for the foundational beliefs that guided successful men and women in their business endeavors—from which to base those actions—the review shortchanges the major benefit of this book. [view Alfred E. Lyon’s perspective on the perfect salesman in the sidebar provided]

The major benefit from this book is gaining an understanding of the different belief systems that can drive a set of actions to make a person successful—probably not just in sales but any aspect of life.

​Each individual author has a theme stated at the beginning of their section, and they are as varied as their paths to success.
Here are a few:
Slid into the book was his personal business card [see picture provided].

​It is a business card that is distinctive in its size and slogan.
​
I guess Mr. Leterman takes first place as the top “master” salesman for me. He gave a gift that is still giving!