DISCERNING READERS
"If my foresight were as clear as my hindsight, I should be better off by a damned sight." 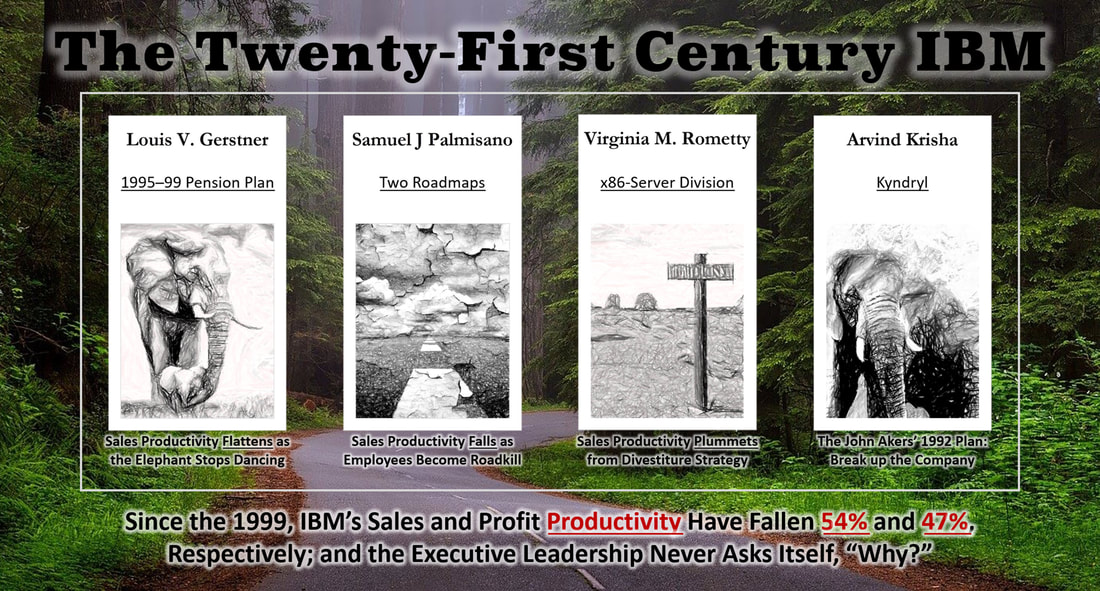 IBM's Twenty-First Century Overview, Performance and Practices
IBM is one of the world’s most representative corporate social ecologies. If IBM were a city, its representation from more than 175 countries would make it one of the world’s most educated and ethnically diverse. Its population would place it in the top forty cities of the United States or Brazil, the top ten of Malaysia, the top five of France or the top two of Romania or Norway.
​​But in 1993, it only took a single year to turn the corporation around because—unlike what Louis V. Gerstner wrote in his book—IBM's culture was still intact.

​​IBM's employees were still engaged.
IBM's leadership has once again—under the premises of right sizing and workforce rebalancing—spiked and then slam dunked its workers around the world. ​IBM has been moving workloads to lower-wage countries for almost two decades, obscuring these moves by limiting the information it releases to its shareholders and the societies within which it does business.​

​From 1999 to 2012 IBM's employment grew by an astronomical 32% to a historic peak of 466,995. It has since plummeted by 34%—one out of every three employees—in the last decade. Meanwhile, the corporation became even more opaque: it has refused to release its U.S. employment numbers since 2008.
Since the end of 2011, IBM has jettisoned at least 158,000+ employees—many in high-wage countries, with 51,000 being released in 2014 alone. This was the year the company sold the x86-Server Division. Then, with the Kyndryl divestiture in 2021, IBM's full-time equivalent headcount fell 67,700.

No matter what its chief executives say, the data speaks volumes: IBM's twenty-first-century employees are no longer engaged. This is why the corporation has not published anything resembling an overall, audited, corporate-wide engagement number since 2011. ​Virginia M. Rometty dropped this vital statistic from IBM's Annual Reports, and Arvind Krishna in IBM's 2021 Annual Report inserted the following meaningless marketing fluff about voluntary turnover:

Voluntary attrition was higher in 2021 than in 2020 consistent with the overall labor market. On a longer horizon, the average voluntary attrition rate of the pandemic years (2020 and 2021) was still lower than the previous two years (2018 and 2019).

The stories in this section can be accessed from the "21ST CENTURY IBM" menu above or ​by selecting one of the menu buttons below which are supported with additional descriptive text.
IBM's Twenty-First Century Performance and Practices