Quotes and Opinions of Andrew Carnegie 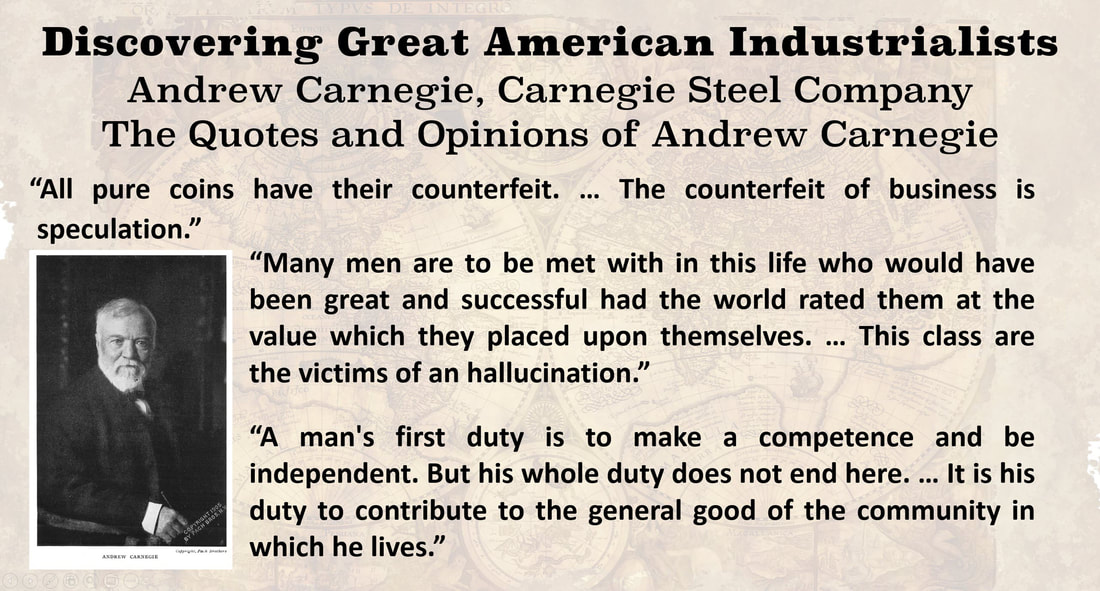 ​ Andrew Carnegie's Quotes and Opinions​
Always break orders to save the owners [of the business].

There never was a great character who did not sometimes smash the routine regulations and make new ones for himself. ... Do not hesitate to do it [break the rules] whenever you are sure the interests of your employer will be thereby promoted and when you are so sure of the result that you are willing to take the responsibility.

You will never be a partner unless you know the business of your department far better than the owners possibly can. When called to account for your independent action, show him the result of your genius, and tell him that you knew that it would be so; show him how mistaken the orders were.

Boss your boss just as soon as you can; try it on early.

Divine discontent is the root of progress, and even our socialistic friends, with their revolutionary ideas, stir the waters for our good, if we reason soberly together and test their proposed remedies before we forsake the path which has so far led our [human] race upward from the brute to civilized manhood. By the nature of its being, the one rule which the human race never can persistently violate is that which proclaims, "Hold fast to that which has proved itself good."

Complaint against our socialistic friends is not that they do not mean well. On the contrary, no class is moved by worthier impulses. Their hearts are in the right place, and one cannot but sometimes admire their aspirations. Thus Keir Hardie writes:
​
"Surely it is reasonable to hope that a day will dawn in which a desire to serve rather than to be served shall be the spur which shall drive men onward to noble deeds."
​Andrew Carnegie, The Empire of Business, 1913
Return to Andrew Carnegie's Bibliography and Book Reviews Home Page