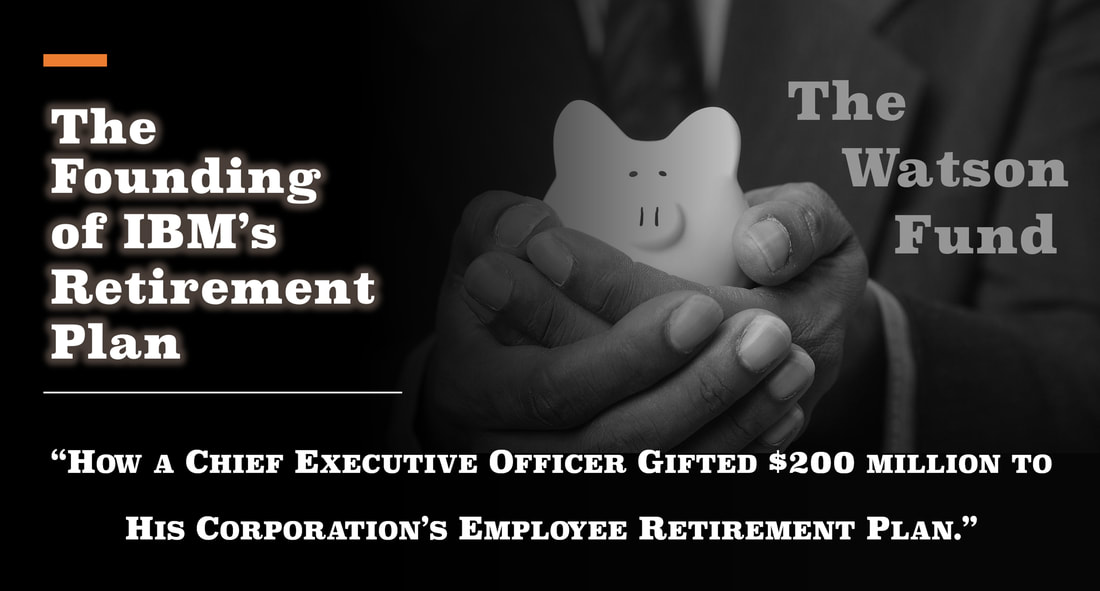 When Peter E. Greulich started his research on Tom Watson and IBM in 2011, he saw this entry in the IBM Annual Reports: "The Watson Fund for Supplementing the IBM Retirement Plan." He, of course, thought it was money set aside for Tom Watson's retirement. Isn't that what most 21st Century Chief Executives would have done—set something aside for the future for themselves?

​The author learned later that this fund was set up by Tom Watson for the benefit of his employees.

​This is an amazing, forgotten slice of IBM history . . .

. . . and Tom Watson Sr.'s generosity.
The History of the “Watson Fund for Supplementing the IBM Retirement Plan"
The United States once again needs chief executives who understand that it takes a supportive, engaged team of stakeholders to optimize profits. One of the critical components of this team is an engaged, passionate and enthusiastic workforce.
Tom Watson Sr. made personal sacrifices to keeps his employees engaged.
The Beginning of the Retirement Plan: 1945
In September, The Board of Directors authorized the establishment of a retirement plan which was approved by the Internal Revenue Service (IRS). Employees reaching age 65 with 10 or more years of continuous service received a retirement income from the corporation to enhance their social security payments. Under this plan, starting with an employee's retirement at age 65, the company added to each employees’ Social Security benefit whatever was necessary to provide a monthly retirement income from a minimum of $60 per month to a maximum of $130 per month.

​This retirement plan was based solely on length of continuous service. All IBM employees received the same retirement income based on years of service regardless of earnings or position within the corporation. Tom Watson Sr. told the approximately 20,000 IBMers listening on a telephone hookup that, "We think this system [of distributing retirement funds] is the fairest possible. It may be presumed that those with larger earnings during their period of service will have been better able to prepare for their own retirement." [See Footnote #2].
To get the retirement system in place, the corporation contributed $1 million a year to cover the cost of maintaining it through Equitable Life Insurance, and it provided the $6 to $7 million in startup funds to make the retirement plan immediately operational at announcement in September of 1945.

At the time, it was documented that Tom Watson had voluntarily given up $1,365,582 in munitions profits since 1939.

The Watson Fund was subsidized with amounts equivalent to the compensation which Watson Sr. would have received for 1942 and all previous years back to1939 had he not voluntarily requested that World War II profits be excluded from the earnings on which his percentage compensation was computed . . . and the reduction in that commissionable compensation he had voluntarily offered.

​In 1941, Watson Sr. reduced his percentage compensation by 50%—from 5% to 2.5%. Over the next fifteen years, he voluntarily reduced his commissionable earning percentage two more times: (1) an 80% reduction in 1946 from 2.5% to .5%, and (2) a 50% reduction in 1951 from .5% to .25%. Overall, in the last fifteen years of his leadership of the corporation, he reduced his commissionable earnings by 95%—from 5% to .25%, and transferred that wealth to his employees.
​
​The table below reflects these changes and their positive effect on the Watson Fund. 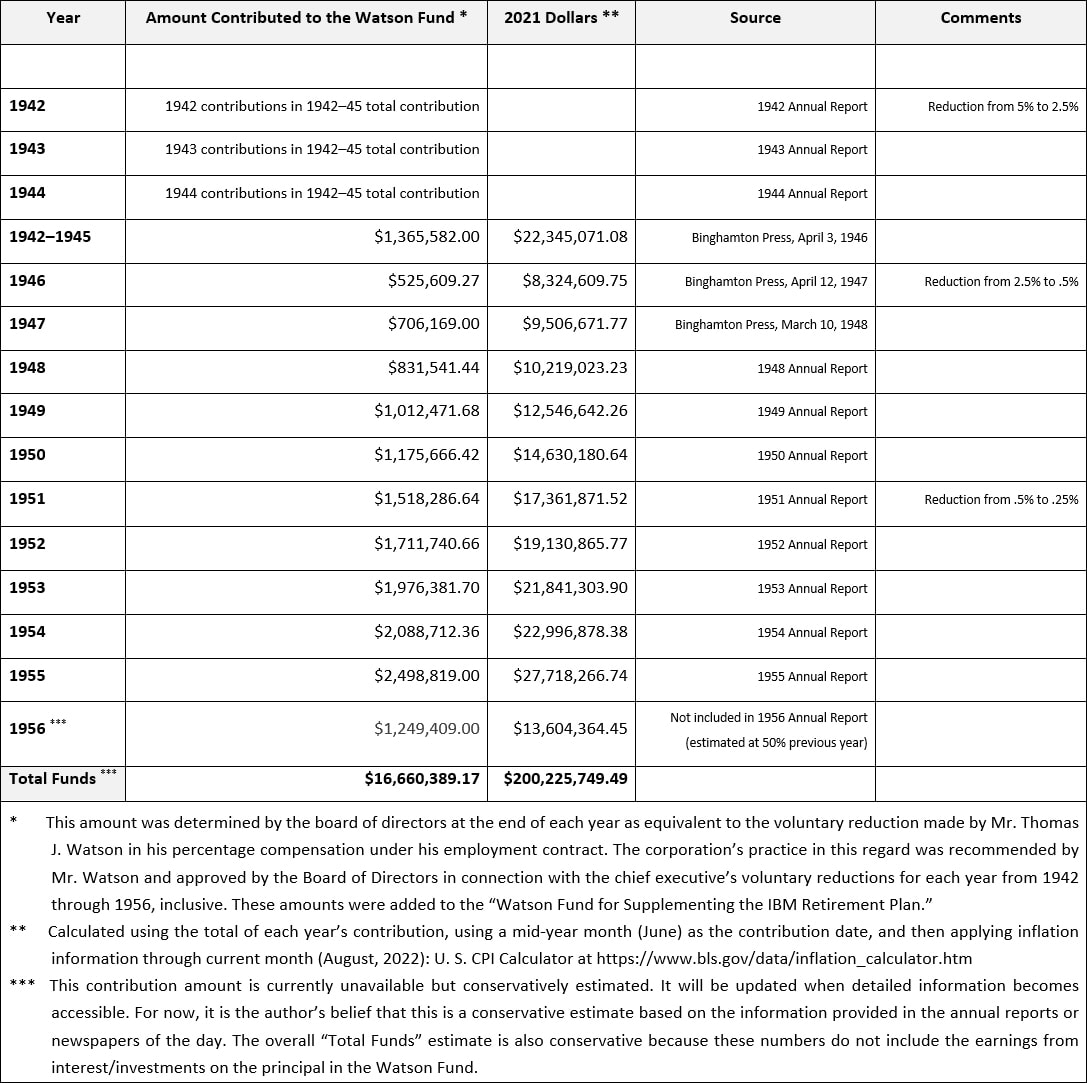 An Improvement in the Retirement Plan: 1951
In December, the Board of Directors amended the “IBM Retirement Plan” and the “Watson Fund for Supplementing the IBM Retirement Plan.” Under the revised plans, the company increased the amount each employee was entitled to receive to provide a monthly income from a low of $75 per month to a high of $240 per month based solely on length of continuous service, regardless of an employee’s earnings or position with the company. (The IBM pamphlet above details the amounts that the corporation and the Watson Fund contributed to these amounts.)

In December 1950, the company created an irrevocable trust for the Watson Fund for Supplementing the IBM Retirement Plan. The amended plans were submitted to the Bureau of Internal Revenue on December 29, 1950 and approved by the Bureau on February 15, 1951.
​
Thomas J. Watson Sr. died in June 1956.
[Footnote #1] The author believes that the money that Tom Watson retroactively refused to accept on munitions' profits was actually used to fund the IBM Widow's and Orphan's Fund. Some articles say this money was also used for the IBM Retirement Plan, so it is included here until further investigation documents how this money was actually used in total.

[Footnote #2] When Watson Sr. announced the retirement plan, he said that this was the fairest way to distribute the available funds since higher-paid individuals were better able to find alternative investment sources to supplement their IBM and Social Security retirements. Because of this decision, there were more funds to be divided equitably between all employees. This was changed in 1956 by Watson Jr. at the time of his father's death.
Return to the Thomas J. Watson Sr. History Home Page