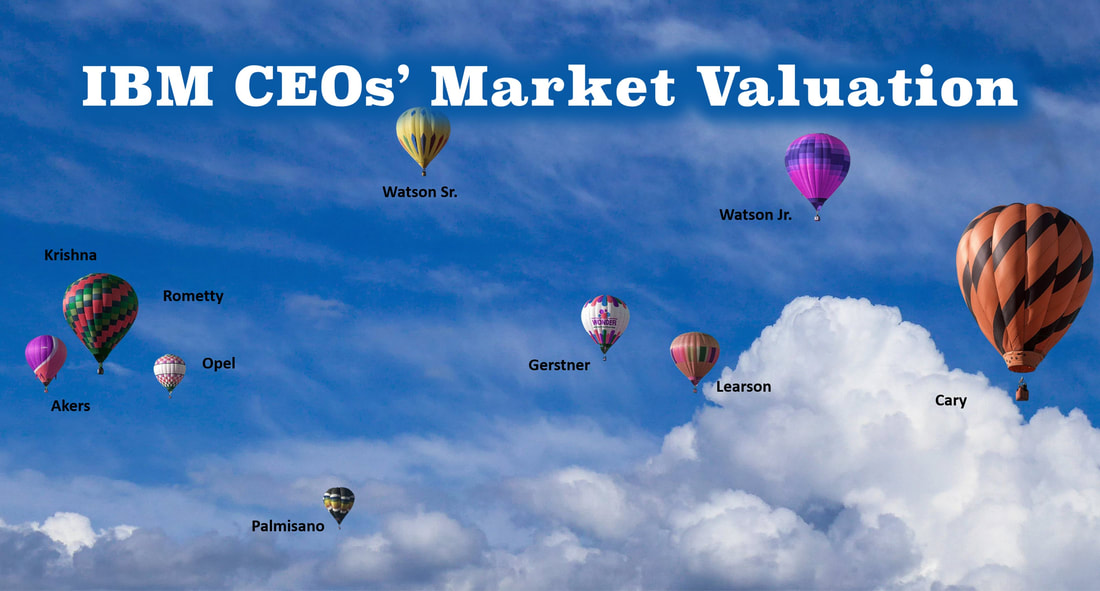 IBM's 1999 Annual Report was the last year that market valuation appeared within any of the report's covers as “the most important measure of progress to investors.” Since 1999 many short-term investors have only been inspecting IBM’s earnings-per-share to determine success or failure. This is a mistake. For eighteen years, three of the corporation's longer-term investors—customers, employees, society, and long-term shareholders—have been considering more than this single perspective offered up by IBM's short-term-thinking corner office. This has been reflected in IBM's market value—the market's trust and confidence index.

Facts worth noting: This chart, even if it was a logarithmic chart, could not proportionally convey all the changes in IBM's one-hundred year history. This format, though, does show the volatility over the last six decades. Watson Sr.'s individual chart below breaks out the changes during the first four decades when the company grew from a market capitalization of $5 million (a low reached during the Recession of 1920-21) to  $2.8 billion.

Each of the gray markers in the chart above gives a sense of the market performance of the company under each chief executive officer.

Facts worth noting: Even though Virginia M. (Ginni) Rometty stopped share buybacks in 2019, IBM crossed the $200 billion mark buying back its own stock. This is an average of $8 billion per year invested in paper. From a market value perspective, it seems obvious that this money could have been spent more wisely than driving an overall loss in market value of 42% since 1999 (without considering the impact of inflation).

​Compare the record of Gerstner-Palmisano-Rometty who have invested in paper with Thomas J. Watson Sr. or Jr. who invested in people, processes and products: [Share Buybacks Do Not Work].

Facts worth noting: Watson Sr. took the company from $5 million in market value to $2.8 billion. Rather than enumerate all the recessionary pressures on the company during this time, it is easier to view the graph provided under comparing economic headwinds of IBM's chief executives. The chart above highlights World Wars I and II and the Korean War. Yet through all of these economic and political pressures the company's market value was a steady climb up with a few falls under the extremist of economic and political pressures.

Facts worth noting: Watson Jr. wrote in his book Father, Son and Company about the increased competition as he was making the shift from tabulating machines to computers in the early '60s. It appears the market saw this competition too. He would write in his book that in the autumn of 1965, after announcing the System/360 in April of 1964, everything looked "black, black, black" as the company clung to "its production schedule" but "morale was going down." The company would come within weeks of needing to borrow money to meet its payroll obligations. He "surprised" the market with a new stock offering to cover the costs of building the new hardware platform. The shareholders kept their faith in his leadership and the company's ability to deliver. The new stock was fully subscribed. In the early '70s the market value would take another decline as recessionary pressures took their toll.

Facts worth noting: Watson Jr. wrote in his book Father, Son and Company that his 1970 heart attack threw his plan to move Frank Cary into the corner office into "disarray." Vin Learson was ending a long and dramatic career and deserved the top spot. Watson named Learson chairman, to retire when he turned 60, and then move Frank Cary into position as CEO. It was a nice ending for a man who served as Tom Watson Jr.'s acerbic touchstone for so many years.

Facts worth noting: By the end of 1972, IBM’s United States employment had dropped for three consecutive years (a fact equaled only once before, during the Recession of 1920−21). Then, with 8% fewer employees, the U.S. stock market—because of Vietnam, Watergate, and inflation—suffered its largest drop since the Great Depression (only surpassed recently by the Great Recession). IBM’s stock lost almost 45% of its value, and it would not fully recover until the early 1980s. Customers delayed purchases of the IBM System/370—an evolutionary update to the System/360. At the time, IBM’s culture stood unequaled in Corporate America—and it needed to be, because three Category 5 storms were converging simultaneously on the business: economic, political and competitive.

Facts worth noting: John Opel, set growth expectations so high in the market that the press wrote in early 1985 to expect a $100 Billion IBM by 1990 and a $180 Billion IBM by 1994. Even worse, he spent money like it was achievable. Opel, in his four-year tenure, used financial engineering—following a short-term, financially expedient path at the expense of the long-term health of the business. When Opel’s “engineering” reached its all-too-predictable end, one out of every three shareholders abandoned the company. Then his successor blamed the employees rather than a failure of leadership.

Facts worth noting: John F. Akers, stepping into the role of chief executive, hesitated in slowing down spending. He lost faith in his employees, accusing them of standing around water coolers. But unlike Watson Sr., who made a similar mistake in 1921, Akers never acknowledged his mistake, so the employees lost faith in him. The whole corporation knew it was time for a change. Then he sent mixed signals about IBM’s viability to his stakeholders and dabbled with putting IBM on the auction block as “Baby Blues” to satisfy Wall Street.

​With the shipment under his watch of the AS/400, the RS/6000 and the S/390, it is hard to not think of this chief executive as the individual who snatched defeat from sure victory.

Facts worth noting: The board of directors brought Louis V. Gerstner in from the outside and, contrary to all the press reports of the time, he had the right vision. The employees cheered as they heard five key messages: IBM would remain one corporation; the customer comes first; break down internal bureaucracy; diversify into software, hardware, and services; and take the battle to the competition. This new leader used words that were familiar to a still strong and viable corporate culture. Motivation is a door that must be unlocked from within, but Gerstner slammed his fist against the door and raised the rallying cries. The culture of old emerged from its hibernation, shook off its slumber, and responded with all its might and vigor.

​Unfortunately, Mr. Gerstner proved to be a 21st Century Shakespearean King as he never managed by wandering around, was the definition of an unapproachable corner office, and failed to equitably share the fruits of the recovery with his employees. Gerstner used the employees' defined-benefit retirement plan to pad his corporate performance, initiated resource actions, started share buybacks in 1995, and discarded market value as a chief executive officer key performance metric. The major question for Louis V. Gerstner to answer is why IBM's market value didn't perform better during The Great Expansion.

Facts worth noting: In 2006, under Samuel J. Palmisano’s leadership, the IBM annual report stated that “we saw change coming.” He wrote that IBM was generating and would continue to generate higher value because of its foresight and preemptive actions: remixing the business to enter higher-value spaces and becoming a globally integrated enterprise. He believed these actions would improve productivity to deliver record profits, record earnings per share, and record cash performance. This was the driving impetus behind his two five-year roadmaps.

​Obviously, he didn't have enough foresight in 2006 to mention one record he would attain in 2008: while spending an average $9 billion a year on share buybacks, market value reached its lowest point in the 21st Century (at least until the year end of 2020). ​Under Sam Palmisano's leadership, market value ended in 2011 where it started off at the end of 2001.

​In Japan, they called this a "lost decade."

Facts worth noting: The chart seems to speak for itself. Mrs. Rometty should have studied John F. Akers' failures a little closer before taking the corner office. It is hard to optimize corporate performance without the employees supporting you and failing to reverse or replace your predecessor's failed strategies.

Facts worth noting: Only the incredible lack of facts worth noting. Arvind Krishna in his first year is more of the same.
Return to "Who Was ibm's greatest ceo?" Home Page