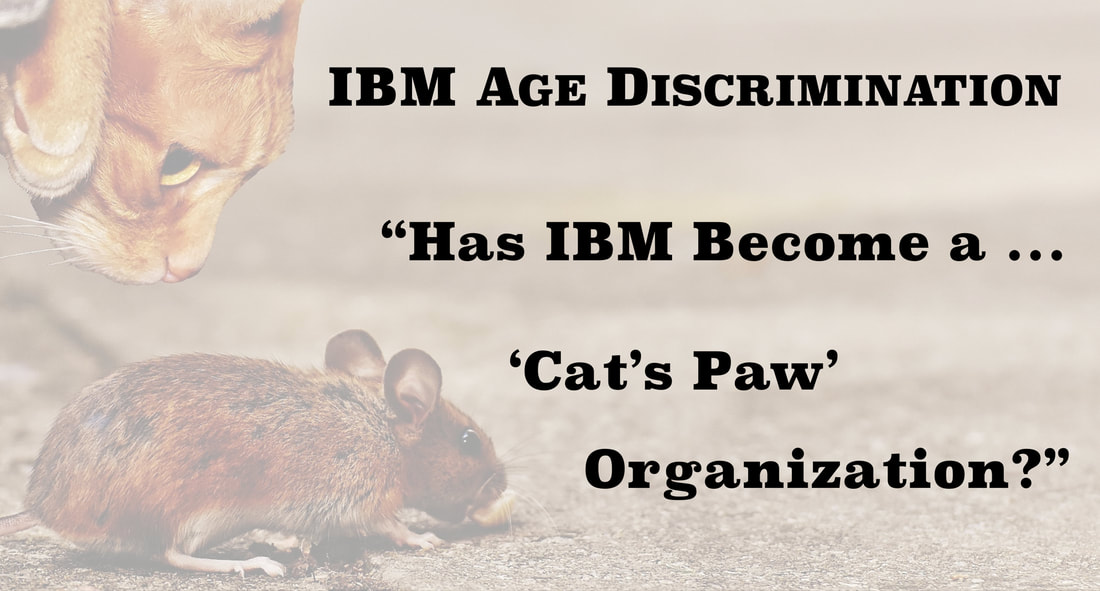 Editor Update: The lawsuit that generated this article was most likely settled out of court. For the complete story read The Register article. ​Here is a short excerpt:

"The court order closing the case, signed on Wednesday by Judge David Ezra in the Texan Western District Court, cites a stipulation of dismissal by Langley and IBM. That suggests the two parties have agreed to settle confidentially out of court."

​Is IBM Becoming a Cat's Paw Organization?
​A Quote from the Past that Seems Applicable

We want to see to it that while there is the restraint of abuses, it is persons who are restrained, and not unnamed bodies of persons [corporations]. There is only, historically speaking, one possible successful punishment of abuses of law, and that is, that when a wrong thing is done you find the man [or woman] who did it and punish him [or her].

You can fine all the corporations there are, and fine them out of existence, and all you will have done will be to have embarrassed the commerce of the country. You will have left the men [and women] who did it free to repeat it in other combinations [corporations].

​Woodrow Wilson, Lecture at University of North Carolina, 1909
The IBM Austin Age Discrimination Suit
As the old decade came to an end in 2020, IBM was given its first new-year setback. The judge in Austin, Texas denied IBM’s request for summary judgement. ​They had fourteen days to appeal.
Such examples are exceptions to the rule, though. She was an exceptional person who managed to get the chestnuts from the fire without burning herself. She outsmarted the human resources monkey until 2009.
​
Then the cuts were so deep that even she couldn’t protect her own [The Resource Action of 2009].

​We all knew it wasn't her fault.
Fallacious Business Thoughts at the Highest Levels of IBM
The following chart shows how IBM, even though its number one cost of doing business is its cost of labor, grew the number of its employees by 100,000 yet drove its profit productivity up ... but, unfortunately, had the opposite effect on sales productivity—driving it down.

​IBM executives believe that people are interchangeable commodities where a high quantity of low-experience employees can easily replace a low quantity of highly experienced, highly-productive workers. Such thinking is best seen in Ginny Rometty’s concept of “collar” jobs that has resulted in “as many as one third of IBM’s employees having less than a four-year college degree.” These new employees need to be careful that their collar job doesn’t become a “choke” collar which the corporation is considering for the next quarter’s resource action. [See Footnote #1]
​
This chart shows the effect of an organization myopically targeting and jettisoning older, productive employees to raise short-term, quarter-to-quarter profits. Productivity improvements are the only long-term way to simultaneously increase profits, increase wages, lower product costs and improve product quality.
​​ This Author's Thoughts and Perceptions
Tom Watson was 65 years of age at the time, and he served IBM for almost two more decades.

​The 20th Century IBM was a corporation that paid for performance. The “human package” that the performance came wrapped in was of little concern. IBM today doesn’t hire managers to manage performance. The corporation’s human resources organization has been manipulating individual performance appraisals for decades to ensure finance can make its quarterly profit targets. Its human resource managers have malleable principles who enforce inflexible, rigid, quarterly financial targets, through a management chain full of cat’s paws.

IBM used to “pay for performance,” and it paid for this performance regardless of age. It no longer pays for performance but compliance, and its two-decade long drop in sales and profit productivity is the undeniable, long-term, proof point that it has cut loose its older, more productive employees.
​
Discriminatory and stupid, eh?