John Gunther's "Eisenhower: The Man and the Symbol" 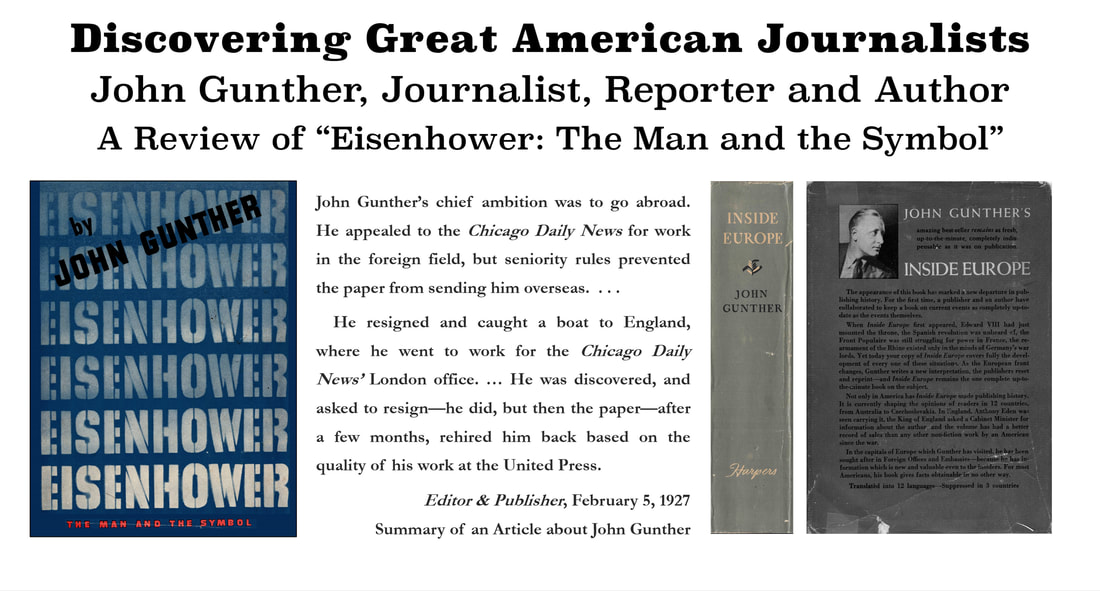 “Gunther’s Eisenhower: The Man and the Symbol is a highly readable first-rate reporter’s appraisal of Eisenhower’s character—assets and liabilities. … [The reader] may not agree with the sum the author has totaled up but any reader must agree that Gunther has done a remarkably fair and intelligent job. …
​
There will be other books about General Eisenhower but of those written to date this one gets across the personality of the man better than any I have read.”
G. N. Battle, Books for the Family
The Franklin Indiana Evening Star, March 1952
A Review of Eisenhower: The Man and the Symbol  by John Gunther
Reviews of the Day: 1952
​There were an amazing number of reviews. I attribute this press attention to Eisenhower’s popularity, John Gunther’s well-deserved, worldwide reputation as the author of an “Inside of …” series of books, [See Footnote #1 and the next image: Inside Europe] and anticipation of the next presidential contest in 1952—which Eisenhower, after bowing out of the 1948 contest, would run in and win.
R. H. Bond,  “Gunther … on General Eisenhower,” The Jackson Sun, February 1952
“Strictly a quickie, this is not a great biography. But it is a good, intelligent report, the kind Americans will read, understand and enjoy. … Gunther paints an extremely attractive picture of Ike. It is a picture, first of all, of a man so human, so American, that it is just this side of unbelievable.

And the human, American qualities that have endeared Dwight Eisenhower to so many millions are genuine, Gunther writes. He doesn’t turn on the charm—it is always on. He doesn’t have to try to be friendly, modest, poised or great. And, in a sense, that is why he [Eisenhower] is, to some extent, all of these.”
John Ed Pearce, “Gunther’s New Book,” The Louisville Courier-Journal, February 1952
Interesting Insights from Eisenhower: The Man and the Symbol
​John Gunther offered some amazing insights into the man: Dwight D. Eisenhower like the following:

“His speeches are to a remarkable extent packed with antiwar sentiment. Perhaps his apothegms in this direction are not as well-known as they should be.
​
“Here are a few:
This Author’s Perceptions of Eisenhower: The Man and the Symbol
Later in the book John Gunther offers this amazing insight into Eisenhower:
​ Although, I was stationed in Germany with the U.S. Army, it was two decades after Eisenhower left to return to run for President—Nixon had assumed the presidency and was pulling us out of Vietnam and threatening war with Russia as he faced impeachment. I would have loved to have had this background knowledge while I was serving.

​Then again, I was eighteen and just trying to do my job as best I could.

I appreciated the very last sentence in the book:

​“I kept thinking that this man [Eisenhower] might be a four-star general and all that, but what I would always remember about him was that he was such a splendid human being.”

​John Gunther conveys this information about a splendid man—one of our former Presidents, in a balanced, well-written manner. A highly commendable and recommendable book.

- Pete
[Footnote #1] The list of “Inside” books by John Gunther—many of which were updated numerous times with new revisions—is the following: Inside U.S.A., Inside Latin America, Inside Asia, and Inside Europe. One of the common puns of the day was that the title of this book should have been “Inside Eisenhower” as it was a look at the character and internal workings of a soon-to-be President of the United States.

[Footnote #2] The phrase “total war” is a phrase that came into the common vernacular in the United States after World War I and the publication of Herbert Hoover’s book, “The Problems of a Lasting Peace.” Historians should dig deeper into this phrase's meaning and usage by men such as Herbert Hoover, Dwight D. Eisenhower and Thomas J. Watson.