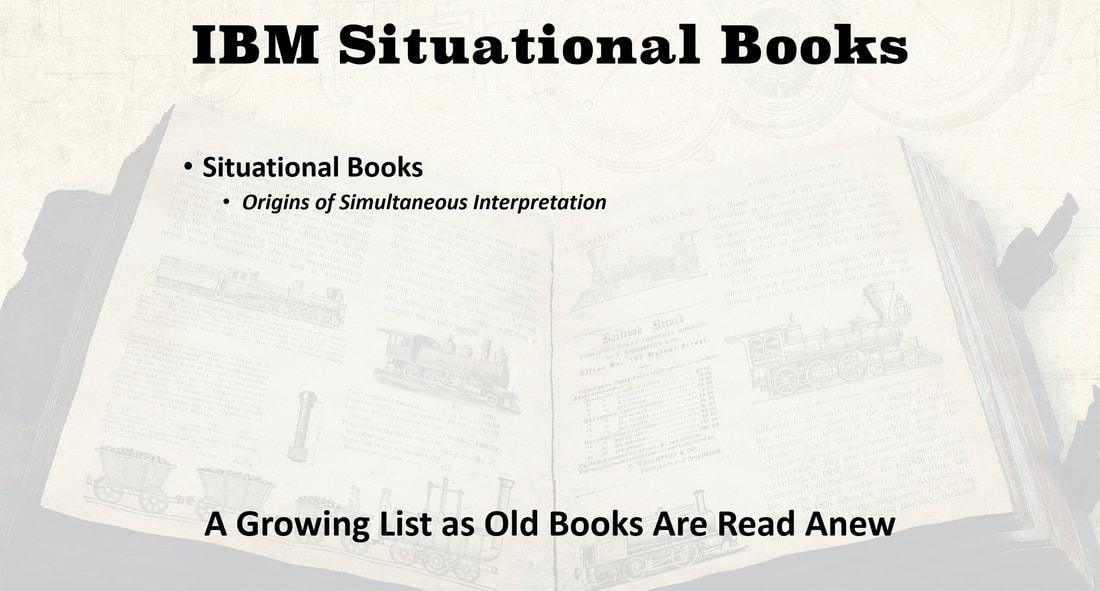 These books are situational in nature. They are not directly about IBM and its leadership but they may evaluate an area of IBM technology or discuss IBM leadership styles that adds depth of understanding in any discussion of the corporation's history, the actions of its leaders, or behavior of its employees. Researching IBM is like entering a giant maze where a dedicated student in the pursuit of accurate knowledge doesn't necessarily know where the next turn will lead. Surprises are around every corner and inconsistencies that need to be explored and explained.

The best example is the first in this list: The Origins of Simultaneous Interpretation by Francesca Gaiba. It is a book about the evolution of simultaneous translation and its usage and effect on the Nuremberg Trial which—​without the context of history—​would seem to have little bearing on a discussion of IBM.

​I am sure that as time progresses this list will lengthen and I will eventually need to group these books into related categories for clarity as I have other collections above.
IBM Situational Books and Publications for Research
The Origins of Simultaneous Interpretation
One of the reasons I bought the book was to document if the author had a quote from Hermann Göring that I had already discovered in the New York Times, and she did. For me, it is one of the most balancing statements to the constant discussion of the usage of tabulating machine technology in the Final Solution.

​It would be my recommendation that the United States Holocaust Memorial Museum consider putting alongside the tabulating machine it currently displays, the Filene-Finlay Device (IBM's translation technology) that was one of the key technologies for bringing to justice the individuals responsible for the 20th Century's greatest atrocity. Hermann Göring's quote should be above the translation device.

Above both of the machines (tabulating and translating devices) should be Watson Sr.'s quote as a warning to all generations about the possible use and misuse of new technologies: ​

Machines don't grow on trees or bushes. This is a great age, and the machines that we see on every hand, on every side, are evidence that it is a great man age. Men make the machines and use them for man's good. ... Thinking people do not want to destroy machinery or stop the invention of new machines. Yet those who talk about the perils of the machine age have a side. ... The same tools in the hands of an infant, an intelligent but untrained youth, and a skilled workman will produce quite different results.

​The infant may injure himself, the youth may do a botched piece of work. Only the trained workman will realize the full usefulness of the tools. Society, at the moment, seems to be not much out of the infancy and youth stages in its use of today's marvelous machines. But we are learning and growing up.

Thomas J. Watson Sr., Corsicana Semi-weekly, 1935
​A quite appropriate quote to remember as we move into the age of artificial intelligence and social media. I am not sure that we are currently acting much like grown ups. We should be moving with more caution in the usage of new technologies.
RETURN TO THE "IBM RESEARCH AND BIBLIOGRAPHY OVERVIEW" HOME PAGE